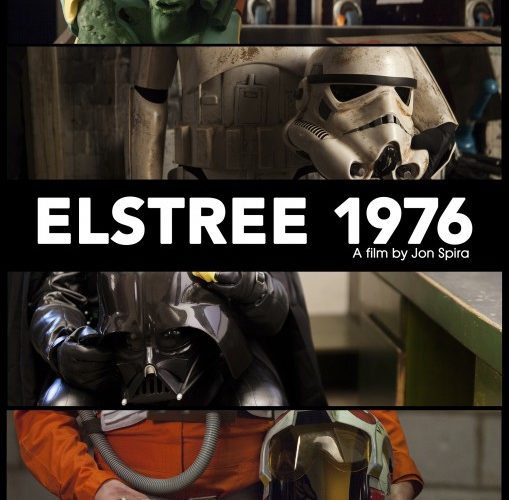 Everybody knows Harrison Ford, Mark Hamill, and Carrie Fisher. When Disney bought Lucasfilm from George Lucas and announced they’d be producing a new Star Wars trilogy and spin-off features, everyone knew those three would be back in the fold. Even guys like Peter Mayhew, Anthony Daniels, and Kenny Baker were known commodities to consult if not star underneath the costumes they made famous. But what of the other actors — the nameless, sometimes faceless, and almost always uncredited performers who were a part of something so universally revered? Does their being extras mean they weren’t as important to the legend? Fans lining up for autographs don’t think so. Anyone on set and immortalized in one of history’s greatest cinematic franchises is an unequivocal hero.

To people like me who love the series but never rendered it into a cornerstone of daily life, however, these smaller, hidden roles prove an intriguing curio. As such Jon Spira‘s documentary about them entitled Elstree 1976 serves as a relevant Star Wars companion for fans big and small. It provides die-hards a look into the process of being on-camera for the fantasy epic and modest revelers a glimpse at the ego Hollywood cultivates no matter how much screen time one earns. The latter is what captivated me most because it’s astounding to see how some have retained this broken sense of superiority while others can merely smile at the memory. Actors generally possess a level of entitlement, but Star Wars‘ pedigree helps stoke the fire hotter. This is in direct correlation to a specific scene of post-New Hope existence: the convention circuit. Spira leaves that circus for the end and instead starts with interviews discussing the early career days and aspirations of his nine subjects (Jeremy Bulloch, also known as Boba Fett, doesn’t enter the tale until halfway through since he wasn’t involved with Episode IV). They consist of icons like Paul Blake (Greedo), David Prowse (Darth Vader), and Garrick Hagon (Biggs); fan favorites like Anthony Forrest (Fixer in deleted scenes and the Sandtrooper Obi-Wan dupes at Mos Eisley), Laurie Goode (the head bumping Stormtrooper), and Angus MacInnes (Gold Leader); and bona fide extras without lines in John Chapman (X-Wing pilot), Pam Rose (Leesub Sirln), and Derek Lyons (Temple Guard).

Tales about Central Casting and experiences on the theatrical stage with the likes of Alec Guinness are shared. Prowse talks about working with Stanley Kubrick on A Clockwork Orange and Rose speaks towards her friendship with Christopher Reeve after meeting on set during Superman. Two are musicians, one opened up a UK-based restaurant, two are Canadian, and all remained entrenched in the arts after Star Wars if not a part of the Hollywood machine. We learn how great a guy Mark Hamill is and how difficult it was to see through the Stormtrooper helmets. Even George Lucas comes across as a down-to-earth director willing to get coffee for someone he hadn’t yet met that was lost on the sound stage. There’s some great stuff. Most of these stories are accompanied by still photographs or joltingly animated freeze-frames pointing out each interviewee’s moment in the spotlight. Unfortunately there’s little behind the scenes footage. This isn’t necessarily a bad thing since the point of the movie is to get to know the actors beyond Star Wars itself, but I can’t help feeling a little disappointed in the discovery. It doesn’t help that Spira stages silent reenactments of headless stand-ins with helmets off or longhaired smokers readying their Stormtrooper lids (without hiding that hair — an irksome detail that stuck with me). At least show Blake putting his Greedo mask on or something fun and relevant rather than bland window dressing interludes. The plastic figurine close-ups have more to say than these facsimiles.

Knowing he did need something more, Spira does finally arrive at the cutthroat and surreal convention life his subjects continue to embrace to this day. It’s here where they begin talking about each other without naming names. MacInnes laments that “extras” without credit don’t belong. Chapman displays a sense of being hurt when recounting his experience signing autographs for excited fans while his acting counterparts mumbled those sentiments behind his back. The sense of envy and jealousy is palpable because it’s weird to acknowledge how Blake and Bulloch garner more attention than MacInnes despite their faces being covered for the duration while his was not. But the fans dictate what sells, not your credit hierarchy. Some get that and others despise it. I found Lyons an interesting character with scarf and quasi-haughty delivery of his resume consisting of blink and you’ll miss him roles (not to mention lewd humor about being a male prostitute, having a smile that should be sold, and adoration for female anime cosplayers). Forrest and Chapman’s modesty and sheer enthusiasm for being able to be a part of the series is infectious while MacInnes’ contempt impossible to ignore. Blake has a ton of fun with his answers, Hagon a wonderful sense of contextualizing the experience, and Prowse makes no secret about milking the Star Wars cash cow for all it’s worth (his account of why James Earl Jones re-dubbed his lines proving a much less intuitive decision than I imagined).

So while Elstree 1976 appears to target a niche audience of Star Wars aficionados, you may be surprised to find it’s just as informative for cinephiles seeking insight into the industry as a whole. The concept of extras and bit players is a fascinating one because it’s such a huge part of Hollywood at-large despite being so readily dismissed as unimportant minutiae consisting of interchangeable cogs. Spira’s subjects show that their personalities are a large portion of what we remember from the film. Who they are as people positioned them to have their performances live in perpetuity alongside Ford, Hamill, and Fisher’s. There’s more to blockbusters than mere celebrity and while that’s important to acknowledge for you and me, the actors onscreen often forget too.

Elstree 1976 is now in limited release.