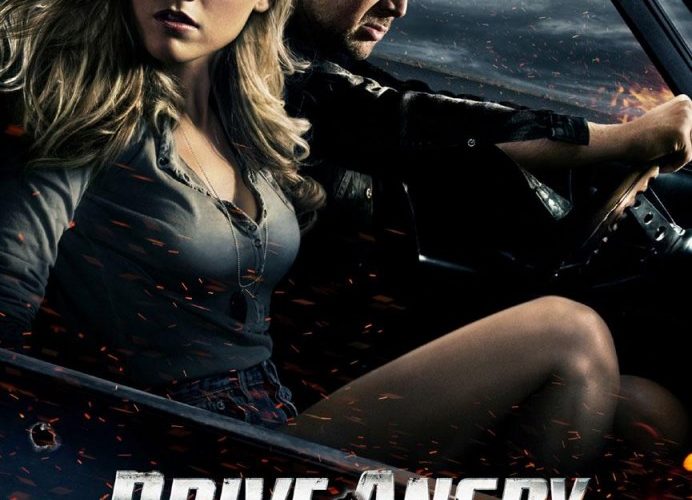 Do you see that man above? You may know him from The Dark Knight, Black Hawk Down, and Armageddon. That is William Fichtner and this skilled character actor out-Cages Nicolas Cage in Patrick Lussier‘s grindhouse throwback Drive Angry 3D. While his 2009 slasher My Blood Valentine 3D delivered the goods, this next logical step should have Cage dominating in an all-out jubilation of depravity. Although he sports a hell of a wig, Cage unfortunately plays it subdued. The first act hints this may not be the case, including a gore-filled opening and an abnormal make-out session with Eastbound & Down‘s Katy Mixon. But as the story piles on, it becomes apparent this is not the Bad Lieutenant/Kick-Ass-esque performance you were expecting.

Nicolas Cage is Milton, a felon on a mission to retrieve his infant grandaughter after she was kidnapped by cult ringleader Jonah King (Billy Burke). The waitress Piper, played with tenacity by the beautiful Amber Heard, quits her diner job and abusive boyfriend to team up with Milton as they go on the run from the mysterious Accountant (William Fichtner). Oddly, the promotional team aren’t hiding plot details that are played like “twists,” some late in the film as well.

Fichtner, pitch-perfect as the off-kilter and completely focused Grim Reaper, is here to bring Cage back to the actual hell he escaped. Knowing this information going in makes for a underwhelming plot as the build-up (and big reveals themselves) waste considerable time. This is grindhouse film after all, and a step-up from our last offering Machete, so I’ll stop complaining about the dry plot.

Technically speaking, Lussier has crafted a competent film. The 3D (shot, not post-converted) does its job just like in My Bloody Valentine. The array of objects thrown straight at you had me flinching. His shot choices are logical, the editing is tight, and his skilled camera movement keeps things moving. We also have the action, why most people presumably bought a ticket.

In the most satisfying scene of the film we have Cage, who is chugging a bottle of Jack Daniels while having sex, fight an onslaught of bad guys in slow motion.  The scene is absolutely everything one could desire and if there were 3 or 4 more in the same style, I could recommend the flick.

We just don’t get that fun ridiculousness again and instead the climax goes for absurdity, coming off cheesy and overtly serious, especially when Cage and Heard attempt a genuine resolution. Drive Angry has the right idea, but the execution feels too force-fed to muster up any palpable excitement. For a film that should be in overdrive from beginning to end, it seems stuck in second gear.