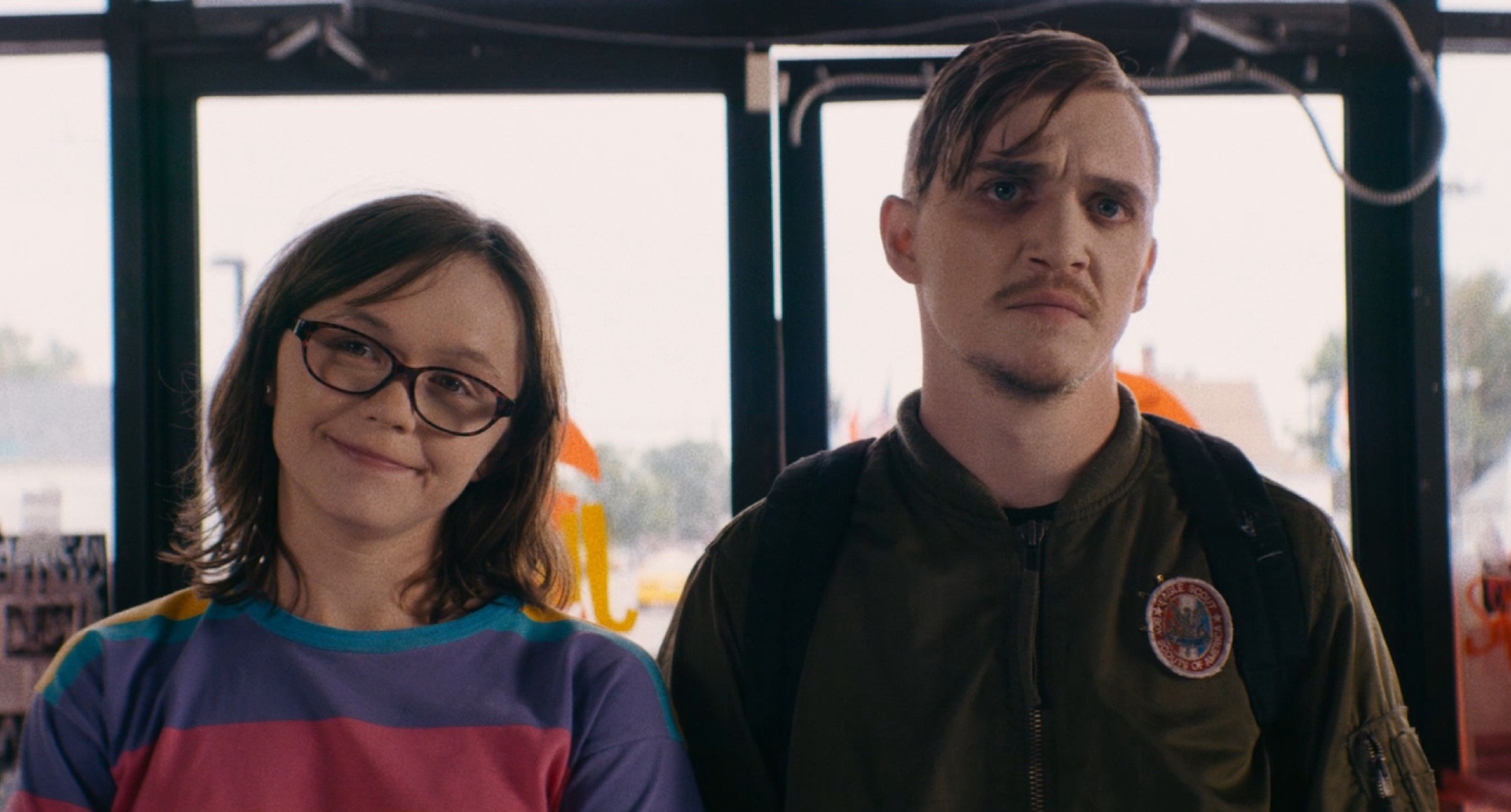 Born from a decision to combine two aughts-era sketches that weren’t quite working on their own, filmed in 2018 (stewarded with the help of Danny Leiner, who passed during production), and debuted in 2020 at Sundance, writer-director Adam Rehmeier would be forgiven for just being happy Dinner in America is finally hitting the public. The result is more than the culmination of a lengthy artistic gestation, though—its content, humor, and heart all merge to deliver a piece with the potential for cult appeal that transcends the act itself. It’s a treatise on America, the blurred line between taboo and cruelty, and our collective fear of real individuality despite claims by both sides of the aisle to foster freedom. The outcasts get their day.

Simon (Kyle Gallner) and Patty (Emily Skeggs) provide it via a complete disregard for decency, either through active (the former) or unintentional (the latter) anarchy. He’s the frontman of an underground punk outfit, Psyop, who would rather disband than even consider selling out for a piece of paper—literally putting his body on the line to keep the music flowing (pharmaceutical trials pretty much bankroll the group’s existence). She’s an awkward 20-year-old who gets called names by teens and adults alike due to a childlike innocence and curiosity that slows down interactions and triggers America’s penchant for impatience. Simon lives on the edge, uninterested in consequences (the cops put a bounty on his pyromaniac’s head). Patty lives hamstrung to her parents’ intentionally vanilla Good Housekeeping façade.

Fate thrusts them together after Simon’s latest trail of scorched-earth Americana (courtesy a dysfunctional family entrenched in racism, toxic misogyny, and repressive complicity that’s brought to life by Hannah Marks, Lea Thompson, Nick Chinlund, and Sean Rogers). He’s trying to elude the cops (both because of the warrant and the drugs he’s selling out of his backpack) when he finds himself in the alley behind Patty’s job. She covers for him, telling the officer she hasn’t seen anyone strange. As a thank you Simon lets her take him home. And no matter how vicious he’s been or how sardonic he continues to be at her expense, it never feels malicious like with all the bullies in Patty’s life. He’s abrasive yet genuine. She’s gullible yet endearing.

And it works so well. From Rehmeier’s script to Gallner and Skeggs’ performances, this unlikely pairing’s adventure from dinner table to diner booth to white tablecloth is firing on all cylinders. While undoubtably unhinged politically and socially in ways that made me fondly recall the underrated God Bless America, it’s also one of the sweetest love stories I’ve seen in years. Simon is a consummate gentleman underneath his vulgar, chain-smoking surface, giving Patty the wheel to go (or not go) as far as she’s comfortable. Credit Rehmeier for that choice too since his script holds the potential for the exact opposite thanks to a secret that bonded them before they met. He keeps its abstract sexual connection in the background until a real emotional one can form first.

It happens organically, too, both selflessly standing up to be each other’s savior without pretense or coercion. Patty could have thrown him to the wolves or left him behind, but she chooses to bring him home and meet the family (Mary Lynn Rajskub’s Connie, Pat Healy’s Norm, and Griffin Gluck’s Kevin) instead. Simon could have had his fun (he certainly does after discovering just how naively pure they are) before cutting them loose the next morning, but he appreciates their honesty and fallibility (beyond merely comic relief, that opening dinner scene exists as a comparison point) enough to ride the wave and enjoy his new friend’s company. That they join to wreak vengeance on oppressors of all ages is icing on their burgeoning romance’s cake.

They’re punk rock regardless of music or mystique. They fight as the little guys for the little guys no matter how much the establishment wishes to enforce silence. And it all stems from the complexity of American adolescence within a nation huffing its own fumes of unearned “exceptionalism.” We see why Marks’ Beth is who she is simply by watching and listening to them eat dinner. The same goes for Patty and her parents’ mix of sheltered dynamic and earnest optimism. Simon doesn’t escape having his own skeletons revealed either because you don’t become that hardened while still maintaining a level of sensitivity without a past marred by rebellion against an unjust, self-absorbed status quo. They’re human beings let down by an authoritarian system yearning to scream.

This is the heartfelt and hilariously manic battle cry against wage theft, exploitation, drug stigma, sexual abuse, and more. It’s two twenty-somethings from very different backgrounds and very different presents who share a common desire to be seen outside the realm of social norms, free from the derision and superiority born out of the lowest common denominator mainstream. What’s more punk rock than pineapple on a burger if douchebags like Derrick (Nico Greetham) and Brandon (Lukas Jacob) are disgusted by it? Nothing. Because this isn’t about the inherent elitism that can manifest out of fringe groups and ultimately make them as damaging as the environments they’re supposedly fighting against. Just because Simon yells into a microphone doesn’t mean Patty can’t sing. The message trumps the medium.

That goes for everything since Dinner in America is hardly a flawless depiction. It’s a very white film (the few Black characters on-screen are drug dealers or extras) with a script that runs the gamut of racial and sexual slurs. It’s also purposeful in those depictions. Rehmeier is lampooning middle America’s repression and aggression through the lens of where that repression and aggression originated: white America. He’s ensuring that we know who the bad guys are. They’re the ones who weaponize the police, demonize minorities, and prop themselves up on foundation-less pedestals. They’re the ones that need to be taken down while Albert (Marvwon) and Earl Jr. (Quest M.C.O.D.Y.) can continue living in opposition to their rules. So, light a smoke, eat a “brownie,” and enjoy the ride.

Dinner in America hits limited release May 27 and Digital HD/VOD on June 6.