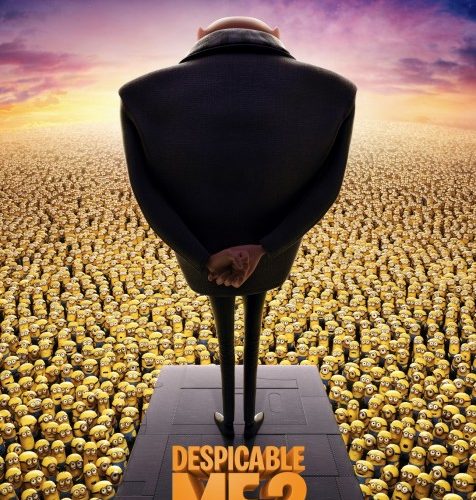 When we last saw super villain Gru (Steve Carell) in Despicable Me he had just returned the moon to its rightful place in the sky, retired from evil and become a father to the three sweetest little girls ever: Margo (Miranda Cosgrove), Edith (Dana Gaier) and Agnes (Elsie Kate Fisher). He had turned over a new leaf after youthful innocence thawed his heart a la Cindy Lou and the Grinch. It’s the kind of evolution that you can’t go back on in a children’s franchise because the lesson learned would be undone in a much more powerful way. The logical path, then, for screenwriters Ken Daurio and Cinco Paul to take was to put his criminal mind to use on the side of good. Once again directed by Pierre Coffin and Chris Renaud, I’ll admit to feeling a sense of trust in a studio that finds a way to retain the creative team of a box office and critical success. Sequels will inherently get dumbed down a bit anyway once the filmmakers realize they’d be stupid not to augment what worked best in the original, so knowing the project hadn’t also been handed off to an outsider helps accept the end result. Despicable Me 2 is all about the laughs and its characters are perfectly realized in its very cartoonish world of physical pratfalls that do no harm other than funny faces wincing in pain. Gru is loveable, the girls are adorable, and the minions are one of the greatest animated sidekicks of all time.

These aspects help us see past the flimsy plot of a mystery baddie secretly living as a mall shop owner who stole a highly volatile serum from Siberia. The heist is whimsically portrayed with a giant magnet and a slew of unsuspecting Russians; the crime provides a legitimate reason for the Anti Villain League to recruit Gru’s assistance; and giving him a partner in exuberantly ambitious Lucy Wilde (Kristen Wiig) adds the matronly element for a single dude and trio of daughters to covet and ultimately complete their new family. Is the journey towards uncovering the film’s antagonist a bunch of comedic skits of red herrings hiding the fact there’s no actual manifestation of good versus evil until the very end? Yes. However, the little familial battles make up for what’s lacking in larger scope. In truth, by the end of Despicable Me we’ve accepted Gru’s evil mind to be in check and focused on a bigger picture. He’s now a Suburban Dad putting on princess parties for Agnes who retrofitted his factory of minions into a jelly and jam shop—a maneuver unsurprisingly leading to the resignation of chief scientist Dr. Nefario (Russell Brand) and a complete end to criminal enterprise. So, unless the entire conceit of this world changes focus, the filmmakers are forced to adapt like their lead. Gru’s main adversaries now become friendly neighbor Jillian’s (Nasim Pedrad) desire to fix him up with a girlfriend and restaurateur Eduardo’s (Benjamin Bratt) son Antonio (Moises Arias) putting the moves on Margo. Add a burgeoning love with Lucy and Gru may never have faced more extreme peril.

The comedy is broad as a result and much like the first film finds itself a driving motivational force for the bad guys. With overly stereotypical voice work from Ken Jeong as an Asian wig seller and Bratt’s Latino Salsa and Salsa owner—who had been voiced by Al Pacino before a bout of creative differences caused what would surely have been a rehash of his faux Cuban from Scarface—nothing onscreen will make audiences conjure a need to take anything seriously. The film is actually at its best when going over-the-top with legends of a super villain named El Macho whose infinite wealth of machismo allowed him to ride a shark into a volcano. The result of the missing serum turning Gru’s minions into purple, crazy-haired, aggressive balls of rage is a hoot too. It won’t be hard to guess where everything eventually goes nor who will be there to help make it happen when the going gets tough, but no one can deny the writers’ success in keeping things entertaining from start to finish. To begin with Carell pretending to be a fairy princess and end with this year’s second boy band homage rivaling This is the End, Despicable Me 2 finds a way to be goofy for the kids and witty for the adults without a need for either to do any heavy lifting. Even the 3D is amplified throughout with a ton of moments where characters or props stick out into the audience as well as one hilarious sequence where we look through the eyes of an infected minion. It’s simply a ton of fun.

In all honesty, the tone reminded me a lot of Monsters University, but you’d be wrong to assume Pixar proved victorious over Illumination Entertainment. Despicable Me 2 earns the right to be slight and nutty because it cultivated those feelings in its predecessor. Pixar made a name for itself for always doing more—creating lush worlds with pathos and emotional resonance—so to watch them now lose that weight is a disappointment due to our lofty expectations. Gru’s newest adventure came with teasers of the minions singing The Beach Boys’ “Barbara Ann” with only the words “banana” and “potato.” We knew what we were getting and the studio delivered on their promise. Agnes still shakes with uncontrollable glee, Gru’s freeze ray makes an appearance, and those little yellow gigglers steal the show again.