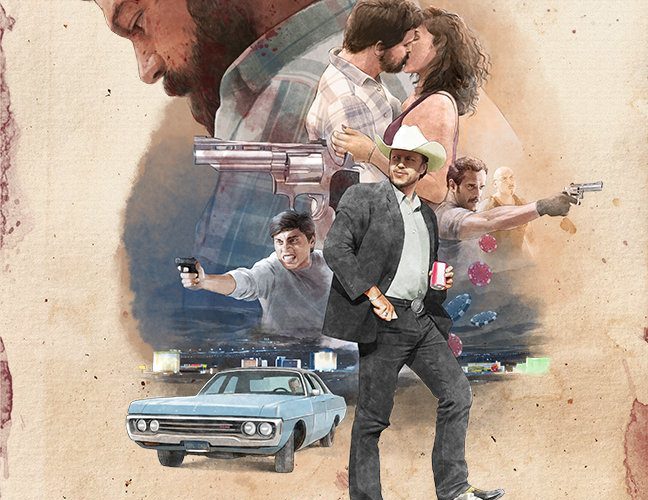 Review: ‘Dead Bullet’ is a Down and Dirty Revenge Drama

If you’ve seen writer/director Erik Reese‘s debut Train to Stockholm—a personal, introspective drama—the thought of him helming a down and dirty Nevadan desert revenger doesn’t necessarily come to mind. But that’s exactly what he’s done with Dead Bullet, the successful genre jump as good a calling card as any for his talents. Starting closer to his adopted home of Finland, Reese reworked a Scandinavian-set script that didn’t quite come together as he’d like for the sweltering heat and casino bells of his hometown in the American Midwest. Rather than being about millions of dollars, uncut heroin, or illegal weapons sold to the highest bidder, this tale surrounds one hundred thousand dollars in poker chips. Chump change to Hollywood, but everything to Bill Holden (John T. Woods).

Unafraid to throw us into his world of tough guys without remorse, we don’t get to meet Bill until five minutes in. Reese instead introduces us to the men that will stand in his hero’s way with brothers Harvey (Jose Rosete) and Shane (Cuete Yeska). They’ve got someone who wronged them in a black hood, a gun in the sand seemingly tempting fate. These two get off on torture in a way that renders anyone in their clutches to be marked as dead before the bullet even enters the chamber. We’re meant to understand what it means to travel in the gray areas regular folk avoid—a world with the potential to overtake your soul to even think about it. Once it grabs hold, there’s no turning back.

This is why Bill ran for a year after stumbling upon those chips in the wrong place at the wrong time. Unable to tell his girlfriend Cheyenne (Andrea Sixtos) what happened, he hoped the danger would die down enough to return later and trade his bounty for cash. He therefore turns to the one person he can trust for help: Cheyenne’s brother Roy (Peter Mendoza). Young and naïve, the latter in turn calls on a “friend” to facilitate a trade. “Dirty” Dick (Ray Trickitt) gets the chips and all the risk attempting to convert them into green at fifty cents on the dollar. Twenty-five large a piece for Bill and Roy is more than enough to get out of Dodge and start anew. But plans are never perfect.

Harvey and Shane return with a two fateful bullets and vendettas turning business personal. This is Laughlin, NV, though, not Los Angeles. We aren’t talking professional criminals as much as muscle-clad bullies yet to meet their match and not so squeaky-clean citizens in over their heads. There are more mistakes and accidents—sometimes happy, mostly tragic—than meticulously thought-out scenarios keeping injury and damage at a minimum. Loved ones die on both sides to up the ante as rage blinds when minds must remain clear. And like the crappy hand Roy deals himself at the start, Bill hardly improves his odds by the end. It ultimately comes down to who involved wants it more. Who has the stones to bluff and who the hubris to fall for it?

If Train to Stockholm didn’t anticipate that Dead Bullet was on the horizon, however, the reverse would easily be true. Just because Reese’s latest deals in murky shadows with a violent temper doesn’t mean it’s devoid of the emotion his previous effort had in abundance. There’s more to the relationship between Bill and Roy than friendship. In another world they’d be brother-in-laws and that bond isn’t something to ignore. Neither is the love Bill and Cheyenne shared despite being a year too late to truly reconcile. These chips could have saved his down-on-his-luck regular Joe and now they’re threatening to destroy everything he ever cared about. His quest isn’t as much for revenge as frustration with nothing left to lose. Backed against the wall, Bill’s capable of anything.

Reese has fun throwing in details as the plot progresses whether hidden truth replacing earlier lies, corrupt cops, or a bond as pure as Bill and Roy’s on the opposition. Too often this type of film utilizes nameless villains doing a job for someone lurking in the darkness. But the adversaries here aren’t your usual two-dimensional pawns. They have families to use as leverage and motivation like our hero. If one goes down the rest don’t keep going like robots on a mission. They’re allowed to fall apart too. They’re as independent as Bill with no one to answer to but their own God for the trail of bodies left in their wake. Harvey may be a legitimately formidable foe, but he feels emotional suffering like us all.

This assures Dead Bullet goes beyond your run-of-the-mill actioner. Some could say this level of compassion derails its explosiveness, but I’d argue it makes it more intense—especially being a bare-bones micro-budget effort from a crew of seven. You wouldn’t know it, though, from the cinematography capturing an authentic world lost to desolation and empty promises to the killer soundtrack culled from a keenly sought-after license package making the project feel bigger than its finances. The acting lives up to this scope of filmmaking too with Trickitt chewing scenery in the best way, Rosete taking no prisoners, and Woods building on the success of his leading role in Down and Dangerous to show he has the emotional range to deliver more than stock Hollywood tough guy physicality.

The secrets Reese hides are subtly revealed in a way that actually disheartens us by showing what we more than likely knew yet refused to believe rather than surprise with out-of-the-blue cheap tricks. This makes it feel more real by not shying away from the stakes of the situation onscreen. There’s no glamor to this lifestyle. Even if you survive you won’t be left unmarked. When the ball gets rolling on a shady deal with untrustworthy characters—no matter how charismatic Woods may prove, we can never honestly call Bill an innocent—it’s nearly impossible to stop. While Hollywood tries to supply bow-tied happily-ever-afters inherently leaving holes due to implausible results, Reese thankfully lets his story evolve naturally to its conclusion because destiny is rarely so forgiving.