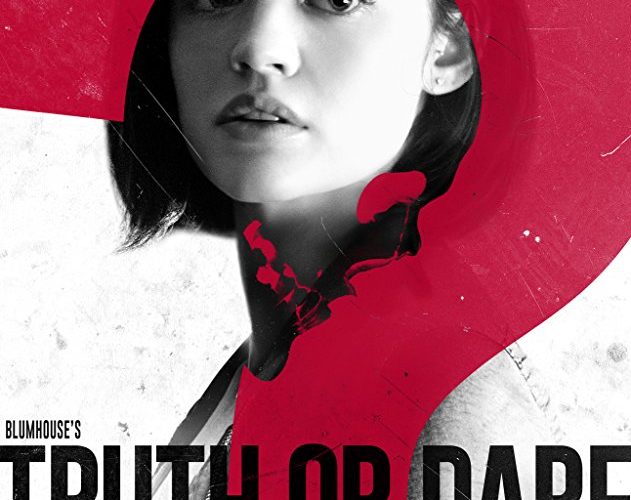 In more confident hands, Truth or Dare might have been something worthwhile. The concept of a viral Truth or Dare game where the main rule is “if I’m lying, I’m dying,” could open all kinds of possibilities in all kinds of genres–imagine what a young Atom Egoyan might have done at the helm. Jeff Wadlow, director of decent genre fare Cry Wolf and Never Back Down, chooses instead to largely revisit the ideas of his debut feature with a group of good-looking college students cursed into playing a deadly game. The only problem is they’re not a terribly interesting group to spend 100 minutes with.

Opening with an evocatively promising premise before dashing off into boring absurdity, a youngster enters a convenience store in Mexico and burns the place down; thus, a curse begins. We then meet our main group who will face various threats: Lucy Hale stars as Olivia Barron, a community role model who’s a good girl on YouTube and a wild child on Snapchat. Olivia’s pals include BFF/roommate Markie (Violette Beane); her closeted GBF Brad (Hayden Szeto); a creepy horny dude who’s always DTF, Ronnie (Sam Lerner); Penelope (Sophia Taylor Ali); an alcoholic, and pre-med prescription forger, Lucas (Tyler Posey). The entire gang heads to Mexico for some Instagram/Snapchat wackiness, which is all in good fun until the scruffy Carter (Landon Liboiron) saves Olivia from Ronnie’s advances. Carter invites the group–including Ronnie–to an abandoned temple for what screenwriters would call the “inciting incident,” and nothing is ever the same again.

If certain moments from Truth or Dare feel like a recent retread, you may be thinking of the superior Nerve, which used the Truth or Dare structure to offer a light critique of live streaming culture in a simpler time before kids started to eat Tide Pods. Truth or Dare offers stock characters that are difficult to invest in as they are picked off. We’re simply waiting for the next body to drop in a gore-free, teen-friendly PG-13 way.

It’s not funny, it’s not scary, and it’s not engaging, which begs the question: if MoviePass proves to be an industry savior, will Hollywood simply churn out predictable product that offers a reliable return on investment rather than bankrolling visionary artists with perhaps more limited appeal? Not every Blumhouse outing will be another Get Out, but Truth or Dare is the lowest common denominator of PG-13 teen horror. In fact, with the official title being Blumhouse’s Truth or Dare, they may want to think about the quality of their entire library before selling themselves on name brand alone.

The minor saving grace of Truth or Dare is a few genuine character moments, as exploitative as they appear. Brad’s coming out lacks the depth of recent high watermark, Love, Simon, while Olivia and Marie hold dark secrets beyond just a love triangle in which Olivia gets fulfillment from her “dare.” A game of Truth or Dare can actually be a great way to get to know each other, the only problem here is that these characters are so paper thin, that it’s hard to care what secrets they may hide. The fact the film credits four screenwriters is cause for concern. A high schooler could have cracked this garbage out in his or her study hall.