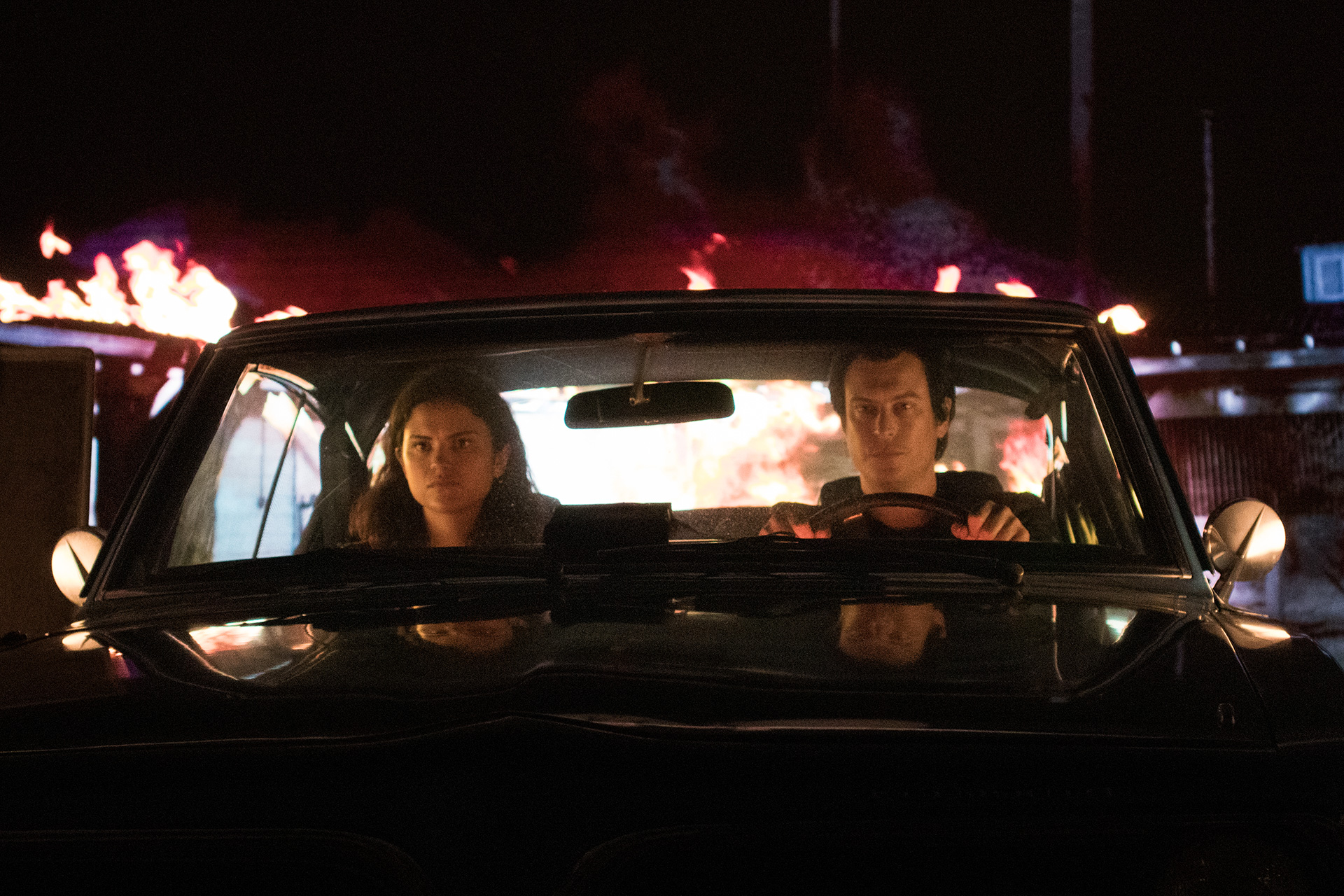 As a vampire without American identification, you could say Francis (Noah Segan) is an illegal immigrant regardless of the fact he’s lived in the country longer than anyone else currently alive with a legitimate birth certificate. Why he chooses to drive through red states in his vintage Barracuda while confusing Alex Jones-loving, conspiracy-theorizing yokels with Yiddish is therefore a mystery. This is the solitary bachelor life he’s chosen, though. And perhaps that part of the country is simply better suited for a nomadic lifestyle demanding a sense of secrecy considering the trail of bodies Francis inevitably leaves in his wake (animal meat makes him bloated). There’s also no shortage of racist criminals no one will miss for him to kill. Happiness is an unnecessary luxury. Survival is paramount.

Everything changes when he finds a fifteen-year-old girl skulking around his motel room. Not only is it a bad look to be tailed when trying to stay under the radar, but the owner (Akasha Villalobos) starts to wonder if he’s a pedophile. So, he must brave the burn that comes from exposing his skin to the sun when pulling her inside his room. He needs answers. Unfortunately, the ones he receives are a lot more complicated than he ever could have imagined since Jane (Victoria Moroles) introduces herself as his daughter. And whether he wants to shrug it off or pretend it’s impossible, the appearance of fangs proves the only evidence needed. She’s half human, half vampire, and wholly his responsibility to take under wing or abandon.

Written and directed by Segan, Blood Relatives delivers familial drama and genre hijinks. Between Francis flashing a smile and using kindness to receive what he wants so as not to get angry (that’s when his fangs come out) and Jane justifiably growing more and more frustrated by a lot in life she didn’t ask to endure, they set the stage for fun yet introspective set-pieces that let the absurdity of their situation shine. They’re the exact opposite of what they think they need, but exactly what they do. Francis hasn’t had a reason to live beyond the grind of his isolating routine. Jane hasn’t ever been alone thanks to a devoted mother who recently passed away. She’s therefore a liability to him. And he’s a disappointment to her.

Enter the growing pains of knowing each other exists and being together despite the implausibility. Jane is desperate to get a hold of the vampire side of herself and Francis is afraid to embrace the humanity he left behind centuries ago. They get to know each other on the road (he’s taking her to the last family she has in the hope that doing so absolves him of ever having to think of her again) and discover the apple didn’t fall far where personality is concerned. He can’t help being sarcastic with her and she can’t help lying to outsiders in ways that make his life difficult. The latter helping their cause only makes him more hostile by proving someone at his side might actually be a benefit.

The adventure isn’t without its hiccups or flirtations with exposition that never go deeper than vaguely incomplete snippets, but that’s not necessarily a bad thing in the long run. There’s something quaint and breezy about Segan letting his script exist solely in the present. None of what happened before matters because putting these two together now demands a clean slate: him as a father and her as a vampire. They’ll make mistakes and people will die, but it’s all a learning lesson for the future. The only way they’ll grow into those roles is by jumping in headfirst. And if things get too much too fast, they can hopefully rely upon external voices for help (Jessie Lucas’ Terry for Jane and C.L. Simpson’s Sylvie for Francis).

Act one (getting to know Francis as a pragmatic yet genial supernatural monster) and two (the road trip) are solid—tightly written, comedic rapport, and a nice dark streak that keeps the two characters honest. Act three is where things get somewhat shaky with a self-contained subplot (wherein Francis needs to procure documentation to help Jane be a real teen with stability and schooling) turning things very episodic alongside a quick-paced montaged journey through time as suburbanites. The end thankfully gets back to a more organic feel that nicely wraps everything with an open-ended bow of potential, letting these two interact without the constraints of any specific agenda. That’s when Blood Relatives is at its best. Father and daughter talking out expectations and finding compromise.

A great supporting cast augments that central dynamic. From Jon Proudstar as a concerned parent to Tracie Thoms as a school principal (and potential love interest for Francis if sequels are in the works) to Josh Ruben taking an already wildly conceived figure to even wilder places, Segan and Moroles always have someone to spar with or bounce the other off. They are the stars, though, and both excel at bringing heart (albeit jaded) to the whole. Because this isn’t your usual master and sire relationship. This is dead-beat dad stepping up and rebellious teen doing all she can to ensure doing so won’t be easy. Jane doesn’t owe Francis anything. He owes her. And maybe they’ll discover that sticking together isn’t just a means to an end.