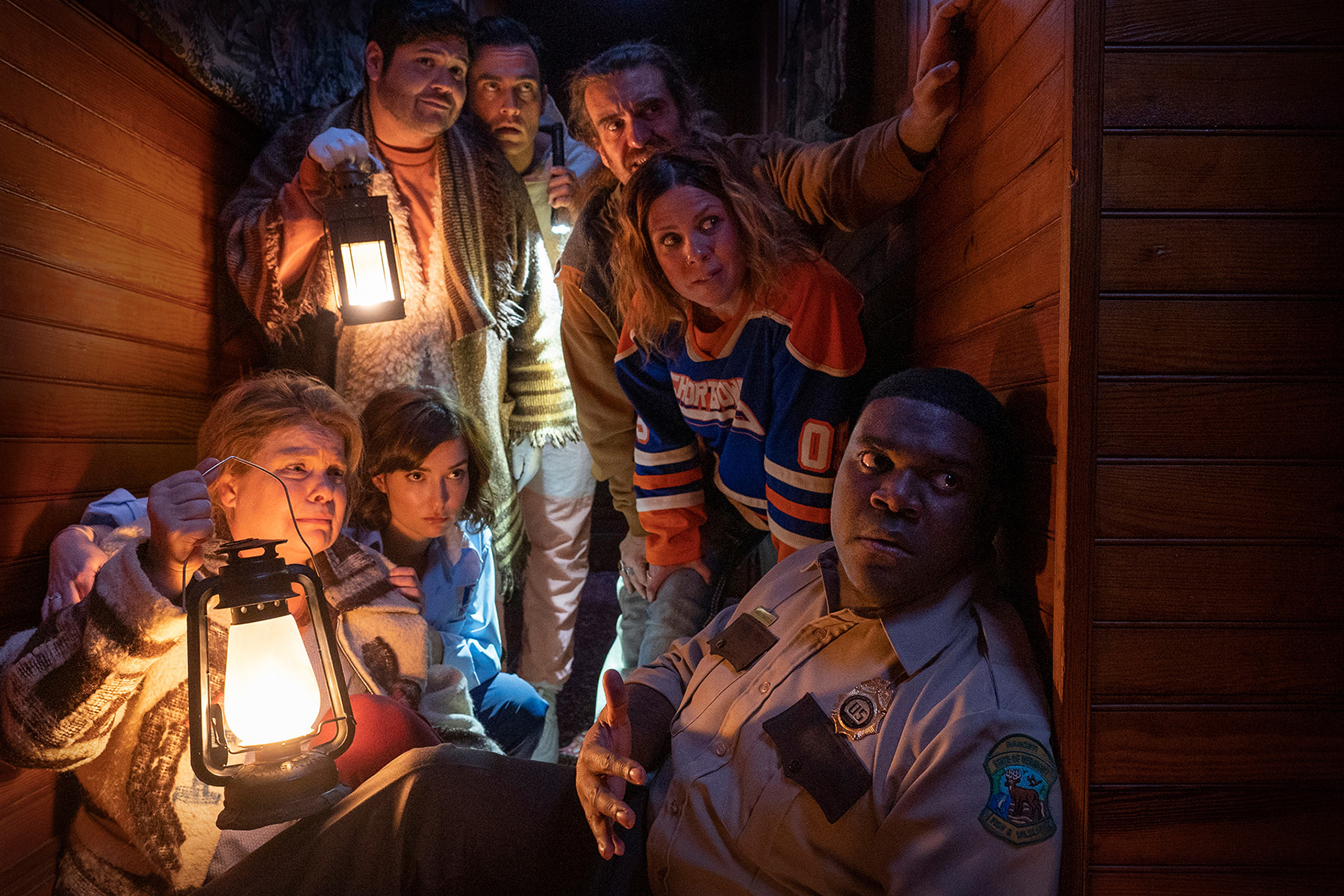 If not for a Ubisoft logo revealing the game company as a producer of Werewolves Within, I would be wondering what the point of buying licensing rights was since this adaptation isn’t even set in medieval times. I’m not sure there’s more that sets it apart from other variations on Mafia (the deduction party game created in 1986 by Dimitry Davidoff before getting a fresh spin as Werewolf by Andrew Plotkin in 1997 and more recently appropriated into the online sensation Among Us) since I’ve never played the VR title, but it appears anyone could just write a murder mystery populated by over-the-top paranoids without worrying about already existing IP. I guess if you already own that IP anyway, though, why not utilize it for cross-media synergy?

Enter screenwriter Mishna Wolff and director Josh Ruben to play with the construct—a small town (Gallowston retooled as snowy Beaverfield) must figure out who among them is the werewolf that’s begun to pick them off one-by-one—in modern day with a cast of locals, opportunistic entrepreneurs, and newcomers. As Wolff tells it, she actually chose this title when invited into Ubisoft as part of a fellowship program to search through their catalog of games not yet set-up for the film treatment (so Assassin’s Creed, Rabbids, and Tom Clancy were off the table). Why not gravitate towards the property with the most creative leeway? She could take the premise and run with it while exorcizing the demons of “always being the first to die when playing social-deduction games.”

The “player” (our entry point into the story) is a just-transferred ranger named Finn (Sam Richardson). He’s the epitome of “nice guy,” always tripping over his words and quickly retracting any statement that may be construed as forceful to ensure he doesn’t come off as aggressive: an issue that men with large physiques often wrestle with—especially Black men in a systemically racist country already looking for reasons to justify its fears. This is a fresh start away from his girlfriend (who seems to be using his move as a passive way to break-up with him) and a community that knows and dismisses him as a mild-mannered, by-the-book pushover. With a self-help tape that has him screaming during the drive over, Finn hopes to slowly turn the page.

He’s come to the right place—Beaverfield is populated by nothing but strong personalities ready to test his patience and sunny optimism. There’s crazy (Sarah Burns and George Basil’s off-their-rockers Gwen and Marcus), shady (Michaela Watkins and Michael Chernus’ duplicitous and conniving Trish and Pete), malicious (Wayne Duvall’s oil man Sam Parker), self-absorbed (Harvey Guillén and Cheyenne Jackson’s tech-millionaire couple Joachim and Devon), kind (Catherine Curtin’s innkeeper Jeanine and Milana Vayntrub’s postal worker Cecily), and mysterious (Glenn Fleshler’s violent hermit Emerson and Rebecca Henderson’s reclusive scientist Dr. Ellis). And they all have their own motivations to put them at odds with one another. Some want Parker’s money. Some want the forest’s serenity. Some want their husbands back while others try ditching their wives. It’s a circus.

The energy you want playing this game with friends is therefore effectively projected onto the screen. Because, besides Finn having no real attachment to any of them, history provides these people too many motives to count. While Joachim and Devon wouldn’t hurt each other and Gwen and Marcus wouldn’t purposely hurt each other, the rest will stick a knife in anyone’s back for the sheer satisfaction. If that person ends up being a werewolf—all the better. As if werewolves actually exist anyway, right? Half these suspects are simply willing to use the heightened state of the slim possibility that they do to get long-awaited revenge. With a downed powerline and avalanche-blocked road, it’s not like anyone can escape with a different story than that of whoever survives.

Wolff and Ruben’s jobs are to give them plenty of opportunities to act on their baser desires by throwing in as many red herrings, weapons, and implausible plot developments as they can for added insanity, comedy, and entertainment. That means an axe-throwing station and so many handguns you’d think this was the wild west and not some sleepy town populated by twelve people who intimately know each other either by choice or impulsive meddling. It means spicing things up with affairs, rumors, and secret lives alongside the witty inclusion of scenarios and expressive performances imploring us to think one thing about a character before revealing the score crescendo and increased emotions were for nothing but an innocuous misunderstanding. Paranoia and fear make mankind the real monster.

So just like we go hard to accuse friends of lying, only to have them tell us they weren’t the killer/werewolf/etc. upon exiting the round, these characters grab hostages and pull triggers with impunity before not even bothering to ask questions in the fallout. That lack of remorse adds to the fun because it lowers the stakes and allows us to let the carnage unfold without truly caring about anyone beyond our surrogate (although Finn’s past isn’t without some room to be the culprit) and his meet-cute love interest (despite Cecily knowing where everyone’s skeletons are hidden, making her a prime suspect with access). It also lets the characters talk at each other sans filter. This is tough-love central with some ruminations on gender stereotypes and identity.

The satire inherent to that injection of political commentary makes everything fair game to skewer sexuality, economics, and community. Werewolves Within opens with a quote from Mr. Rogers dripping with a sinisterly sensory aesthetic that humorously prepares us for a neighborhood ready to eat itself from the inside out. Richardson and Vayntrub become the perfect straight-man characters to traverse the chaos with clear heads as everything devolves around them into petty grievances and homicidal bloodlust. We see them as innocents amongst wild-eyed narcissists that are too blinded by their own ambitions to realize when they’ve gone too far. And maybe that’s the point—maybe they’re just better liars than the rest and simply biding time before rising victorious from the ashes. That’s why we play the game.

Werewolves Within hits select theaters on June 25 and VOD on July 2.