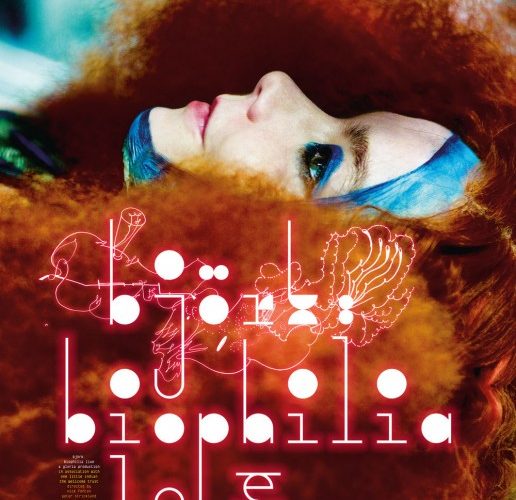 Icelandic musician Björk has always been somewhat uncategorizable with a career that’s uniquely evolved to the beat of her own electronic drum. There was the infamous swan dress, her critically acclaimed foray into acting for Lars von Trier’s Dancer in the Dark, collaborations with cutting edge artists like Michel Gondry, Spike Jonze, and Chris Cunningham for memorably batty music videos, and the 2011 release of her eighth studio album as an iPad app. Partially recorded and composed on the device, Biophilia was a project that combined nature, music, and technology into a multimedia extravaganza where the visual pieces and background history became as crucial as the songs themselves. She therefore had to release a concert film depicting the final live component so all those unable to attend the numerous “residencies” around the world could partake in the full experience. The title word means “love of life or living systems” and was first used by Erich Fromm to describe our psychological attraction to everything that’s “alive and vital.” A hypothesis introduced in 1984 by Edward O. Wilson suggested an instinctive bond between mankind and other living systems, one that deals with all kinds of nature and our positive feelings towards our surroundings, the weather, and animals. Björk went further by thinking about the intrinsic math of life and music coming together, enlisting the help of David Attenborough to hone these ideas, and crafting the new work in a way that relates the phenomenon each song describes to a musical structure. “Thunderbolt” has arpeggios inspired by the time between lightning and thunder, “Solstice” contains sounds created by pendulums moving to the Earth’s rotation, and “Hollow” deals with our DNA.

Biophilia as a result proves hugely ambitious and unfortunately unable to avoid falling apart somewhat without the complete story. While a major issue for non-fans unwilling to seek out clarity, its intricacy forces those attempting to understand—like myself—to dig deeper. Directors Nick Fenton and Peter Strickland‘s concert film Björk: Biophilia Live therefore becomes more than just a document of her tour’s final show at London’s Alexandra Palace like the layperson would assume. In reality, the layperson isn’t going to buy a ticket to watch anyway and dare I say could care less it even exists. For Björk fans, however, this concert serves as a stepping-stone back into the Biophilia web many exited a year or two ago after the album’s release fizzled out. It caps the project and allows us to finally see her whole vision. This means you’ll have to seek out the TV documentary entitled When Björk Met Attenborough. In it you’ll hear the two describe the undertaking’s process, watch her preliminary work with the Icelandic Female Choir, and meet the myriad instruments—some created especially for the album—you hear. We’re talking a Tesla coil, a player pipe organ that accepts digital information, the aforementioned pendulums, and Kent native Henry Dagg‘s five-years-in-the-making Sharpsichord (you’ll see its full glory during the end credits’ performance of “Sacrifice”). Watching this behind the scenes look—or at the very least researching the album’s genesis—is necessary to figure out what the app imagery that’s projected on the ceiling/walls of the London stage means above random biomorphic shapes. Then again, perhaps the pure visceral aesthetic without definition is enough for some too.

Biophilia is played in its entirety with more songs from Björk’s catalog thrown in the mix (minus anything from her self-titled debut or seminal Homogenic). Each song whether “Hidden Place,” “Possibly Maybe,” “Mouth’s Cradle,” and chaotic encore “Declare Independence” has been retrofitted to work with the new instruments and imagery on-hand. They play as the choir singing and dancing in bare feet lines up or surrounds the star, drummer Manu Delago pounds away, and Matt Robertson works the computers. Björk in the meantime does her thing, performing each track with enthusiasm and nothing more than the occasional “Thank you” in between. It isn’t until the first encore song “One Day” is complete that she actually speaks about those onstage with her and the excitement of this being their final show after a three-year adventure. Recorded on June 10, 2013, the show itself is a miraculous in-the-round event with a halo of television screens, elaborate atmospheric projections, and a darkened room of enraptured audience members. Donning a crazy wig and a dress that would fit right into one of partner Matthew Barney‘s films (designed by Raphael Salley and Iris van Herpen respectively), Björk needed sixteen camera operators and eleven focus pullers to capture every angle of her constant movements and musical comrades. Then it was up to Fenton and Strickland to splice it all together and superimpose the footage playing for the audience on those TV screens above the concert itself. While much of what’s depicted comes across as run-of-the-mill high-definition archival footage, there are flourishes (“Crystalline” and “Isobel”) that reminded me of Strickland’s abstract insect wing sequence in The Duke of Burgundy.

As a movie the whole admittedly lacks cinematic intrigue above other filmed concerts, but as an experience—and culmination of a massive work—it’s a memorable sight. Björk said in When Björk Met Attenborough that at her age she needed to make a “spiritual statement” and you’ll understand what she means if you let yourself decipher the visuals, lyrics, and mathematical line drawings pulsing to the notes and time signatures. If you’re not willing to invest the added effort or find Björk’s music to simply be nickels thrown in the oven like Wynona Ryder‘s SNL parody jokes, Biophilia: Live is definitely not for you. So, to those who appreciate her artistry, enjoy the one-of-a-kind style, and have interests piqued in response to her music in nature dissertation, rejoice that the last piece to the puzzle has finally arrived.

Björk: Biophilia Live hits limited release on Friday, September 26th. Find out where you can see it here.