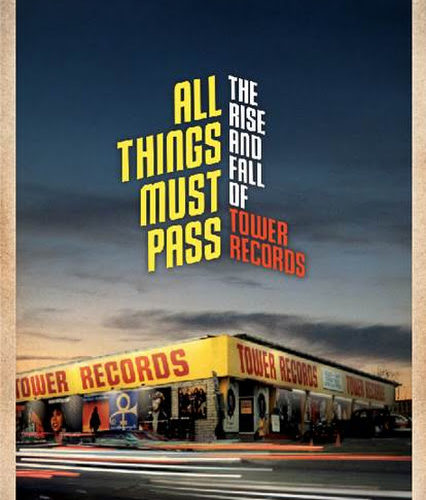 [Review] All Things Must Pass

There’s no better hook for Colin Hanks‘ feature-length documentary about the rise and fall of Tower Records, entitled All Things Must Pass, then the opening lines of text he and screenwriter Steven Leckart utilize: “In 1999, Tower Records had sales of over one billion dollars. Five years later, they filed for bankruptcy.” It’s almost impossible to fathom that statement as reality. I personally didn’t even know the retail franchise was big enough to come close to those sales, but as I soon discovered they expanded into Japan from their humble beginnings in Sacramento before even making it to the east coast. And for its entire forty-six years—save a trying denouement under control of the banks—Russ Solomon was at the center having fun with family.

If there’s one thing Hanks ensures we understand it’s this idea of family. This is why he builds the documentary around employees—the type who rose through the ranks from clerks in the 70s to Russ’ executive team two decades later—as opposed to familiar faces. Despite the IMDB page listing a bunch of celebrities (most of whom are thanked in the end credits), only David Geffen, Bruce Springsteen, Dave Grohl, and Elton John make the cut to give their two cents on the legend of Tower. Instead we meet Mark Viducich who went from Shipping/Receiving Clerk to CEO of Distribution with a stint in the Pacific Ocean, Stan Goman‘s Store Clerk to COO, Heidi Cotler‘s Store Clerk to VP of Book & Magazine Division, and many more. They tell us about the mystique of working for Tower: the lack of dress code, the concept that you just need to show up for work no matter your drug/alcohol-addled health, and that any idea was worth trying. Promotions happened from within and every expansion was handled with care as Solomon and a small team traveled to get things off the ground and train new employees. You want to pitch creating an in-store magazine like Pulse!? Just knock on Russ’ door and if he gets inspired he’ll tell you to go down the hall to money-manager “Bud” Martin for the okay. Tower was small and close-knit from the beginning under Russ’ management style and respect for those doing the work. He trusted them and they didn’t disappoint.

The smiles and anecdotes portray a booming success that kept growing and making money—not the most engaging of plots despite its entertainment value, though. Most businesses that fall as severe as Tower find in-fighting or corporate coups dismantling them from within. It’s this conflict that keeps us interested because hearing about how wonderful it was to work together can get grating if you yourself don’t have a career with that same level of joy. For Tower this adversarial aspect comes from outside their walls and directly from the industry within which they existed. As one interviewee states, while Napster may have been the last nail in the coffin, the writing was on the wall years previously. Bud said they were over-extending themselves and they most definitely were. All Things Must Pass is therefore as much about the rise and fall of the music industry moving from vinyl to digital as it is Russ Solomon’s legacy. The latter is unblemished in the aftermath as he stayed true to himself and employees until financial troubles and wide eyes took their toll. He did what he did because record collections and music consumption increased sales each and ever year. A new store opened and cash was raked in. He embraced new technology like compact discs and was rewarded with the spoils. Russ wasn’t the decision-maker on discontinuing “singles” to force the consumer to purchase full albums. He didn’t push his customers to steal songs on the internet nor was he positioned to get them back through iTunes-like technology.

Tower Records was beholden to the record companies and their mistakes. But don’t think Hanks paints them as blameless or finger pointers. One of the best moments of the film is Solomon admitting he over-spent and grew too big. Some of the others admit they didn’t do their due diligence when expanding internationally—but you almost can’t blame them when they first foray overseas was a booming success like Japan. To keep winning over and over again with a core team of devout, ingenious, and hard-working souls who bleed yellow and red is to become invincible. So when the end comes and the banks bring in “restructuring gurus” to dismantle everything and liquidate assets to pay off debts, they cannot help but feel angry. Thankfully this period of time was the shortest in the company’s history and therefore a brief portion of the film despite it being interesting in scope with much of their failure stemming from outside forces. The focus then shines on the success and the crazy trajectory Tower took. Little things like learning how Russ let each city make their store their own or how Grohl applied for a job in DC so he wouldn’t have to cut his hair or Elton John visiting every Tuesday with a list of releases to buy are what makes Hank’s document so great. Tower Records was very much a way of life that touched employees, customers, and the artists filling it with product like nothing ever had before or since.

The film’s a love letter to the store and Solomon—much of his interview is set within the closed down Watt Avenue location in Sacramento—but also to the bygone era of music consumption before iPods and Spotify. It shows how wild kids could focus their energy into something productive and transform themselves into experts able to help customers seeking new tunes and styles. We hear them joke about how they might have been less than pleasant to novices and downright mean to exude their music superiority, but that was part of the charm. It’s sad to think that a corporation like Tower simply couldn’t exist in this day and age of convenience and impersonality. Solomon built it and they came. But then the world changed on him.

All Things Must Pass is currently in limited release.