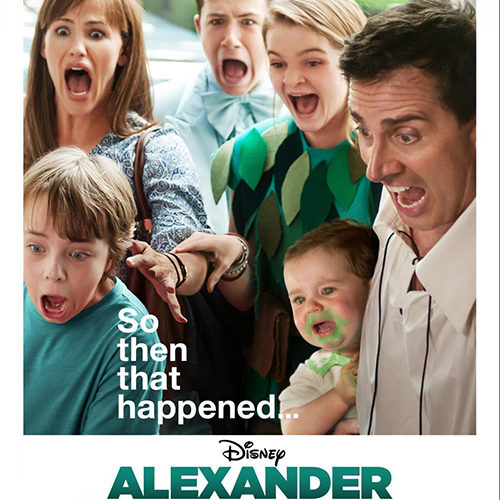 I’m a little disappointed I was never acquainted with Judith Viorst‘s Alexander and the Terrible, Horrible, No Good, Very Bad Day because it seems exactly the type of book I would have read as a child. If you’ve had the pleasure (it was published in 1972) and wonder how a feature-length film could come from 32-pages that literally show nothing but their titular character having the worst luck ever on a very busy day, don’t be surprised when screenwriter Rob Lieber adds the tried and true kiddie trope of a wish gone transformatively wrong. Yes, Jennifer Garner now has another family friendly switcheroo to follow her weak Big facsimile 13 Going on 30 a decade ago. This time, however, instead of a consciousness placed inside a different body for life lessons learned, it’s luck. Originally attached as co-writer and director, Lisa Cholodenko‘s complete deletion from the credits has me guessing the whole “wish” idea was Lieber’s alone. Definitely not unique—two Freaky Fridays, Vice Versa, Like Father Like Son, 18 Again!, 17 Again, and the horrid The Change-Up—at least he and helmer Miguel Arteta didn’t make Alexander’s (Ed Oxenbould) entire family take a turn as the twelve-year old to experience ridicule, lisps, and unfortunate events. That would have made me run for an exit. Instead these perfect specimens of mother, father, brother, sister, and baby get a personal taste of what it’s like when things go wrong. So rather than the book’s mom simply assuring him that everybody has bad days, the movie’s clan proves it as Alexander realizes “good” means nothing without its antithesis to provide value.

What ensues is a short (81 minutes) and cute look at familial stereotypes in the twenty-first century. There’s the workaholic mother (Garner’s Kelly Cooper) who is on the cusp of a promotion that means even less time spent with her baby Trevor; the unemployed rocket scientist father (Steve Carell‘s Ben) who has defaulted into the role of Father Mommy or “Fammy” if you will; popular older brother (Dylan Minnette‘s Anthony) readying to get his license and take vain girlfriend Celia (Bella Thorne) to prom; and overachieving, extroverted sister (Kerris Dorsey‘s Emily) bowing as Peter Pan in the school play. And they’re all kind of horrible, self-absorbed, and delusional creatures Alexander should have emancipated himself from long ago. Luckily for us—at least our kids for whom the film specifically targets—their karmic retribution is a lot more fun. After all, who hasn’t had a day so unforgettable for the wrong reasons that they didn’t wish those pandering with hollow sentiments like “it’ll all be okay” could have their own turn? Not only was Alexander engaged in just such a 24-hour period—one making his First World Tragic life into a happy dream—it was the day before his birthday. But while everyone should be thinking about him with love the next day despite his world collapsing, they each find themselves staring into a make-it or break-it moment of their own. In effect this makes Alexander into the selfish one because he wished they’d find adversity rather than success, but conflict has to be created somewhere. And while the problems had are sadly very white and upper class ones, the message is still relevant.

It’s also rather funny—at times. Alexander and the Adjective-Riddled Day is certainly flawed and some things turning out “all right” by the end are downright stupid (just because something goes viral doesn’t mean it’s good, it just means it’s trainwreck hilarious), but it’s still a serviceable tale for kids facing the existential crisis living on the cusp of your teens brings. Making light of cough syrup abuse and babies eating toxic markers may not be the most wholesome avenue to elicit laughs, but it does work. The prevalent over-the-top tone succeeds too so we’re never feeling truly sad for anyone due to the calamities not being life-threatening. Failing a driver’s test (miserably), bombing a job interview, and getting a cold are mere hiccups exaggerated to the nth degree for comedy. This is a parable, not real life. As such, everyone does well hamming it up—even Garner going agro-crazy in the car and on a bicycle weaving through traffic. Highlights are Thorne playing mean girl without a shred of individuality to deadpan hilarity and Carell proving the one sympathetic character of the bunch in how he does almost everything for his family. Oxenbould is great as the generic “thinks he’s a dweeb, but actually has friends” regular Joe, but for the most part is pushed to the background so Lieber can inflict pain of all shapes, sizes, and age limits on the rest. To a point the film becomes more set-up for jokes than Viorst’s original short and sweet childhood lesson, but that’s still prevalent to make a dent as well. Sometimes laughing at the misfortunes of others is just what the doctor ordered.