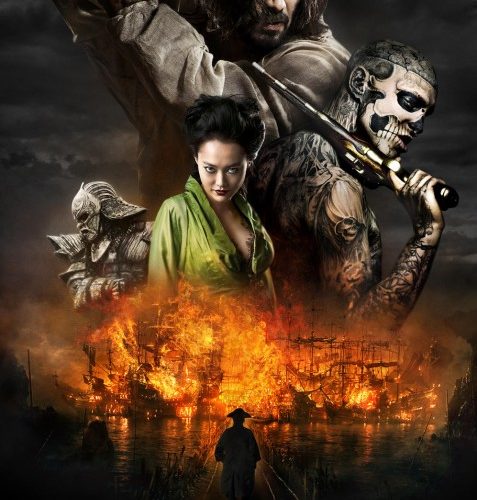 There have been numerous iterations of Japan’s unofficial, national legend about forty-seven ronin who avenged their master’s death at the start of the eighteenth century spanning movies, ballets, television productions, operas, bunraku, and kabuki plays. Known as Chūshingura, the true story has been embellished over the centuries to ensure each new generation told about these brave warriors understood the themes of loyalty, sacrifice, and honor being a Japanese citizen entailed. Whether or not the first account some fifty years after the actual event or any subsequent version went as far into the fantastical realm of witches and giant monsters as Hollywood’s latest take is for someone much better versed in the lore than me. However, while such things create the potential for stunning visuals and a fresh voice, they don’t necessarily improve its chances for success.

Scripted by Chris Morgan and Hossein Amini, 47 Ronin has not had an easy road to the big screen, after giving visionary first-time feature director Carl Erik Rinsch the chance to make good on the promise his video short The Gift made under the tutelage of Ridley and Tony Scott in 2010. Attached since 2009 to the big budget epic, Rinsch accepted the risk and went full-throttle into production by casting a bunch of Japanese actors to add authenticity to the story’s origins that a lead role for Keanu Reeves could not. But even after filming began and finished, its original release date of November 2012 got delayed until February 2013 for 3D conversion and yet again until Christmas once the desire for reshoots to increase its American star’s exposure for added marketing appeal was enforced.

These are far from positive signs and the finished result is far from great or even becoming the stupid-fun action romp the trailers make us believe. Expecting a crazy adventure with monsters and impressive aesthetic flourishes a la Sucker Punch, I was disappointed when it proved to be a rather serious depiction despite its infusion of fantasy elements and the dark arts. The film’s a slow burn of exposition and an even slower journey for vengeance after Lord Asano (Min Tanaka) is forced to perform seppuku (ritual suicide) after being bewitched into an attempt on rival Lord Kira’s (Tadanobu Asano) life by the magic of the latter’s shape-shifting witch (Rinko Kikuchi). Visiting Shogun Tsunayoshi (Cary-Hiroyuki Tagawa) labels Asano’s samurai ronin (masterless and without home) in the aftermath and by default gives Kira control of his fallen foe’s kingdom. While a 300-esque tale follows, the filmmakers seem confused as to whether or not that’s the stylistic road they’d like to travel. If the story stuck to history and simply let this instigated transgression by Asano stand on its own with his lead samurai Ôishi (Hiroyuki Sanada) declaring revenge against the murderous Kira it could have been a stirring piece of nationalism. Morgan and Amini’s want for mysticism, however, throws a wrench in such things by introducing a half-breed demon/man in Kai (Reeves) for which a large portion of the film focuses upon above the kingdom he swears to defend. An impossible love story is struck between Kai’s outsider and Asano’s daughter Mika (Kô Shibasaki)—who’s now promised to Kira—that runs parallel to Ôishi’s honorable bloodlust so they may join together in the central fight.

If you excise Reeves from the story, however, absolutely nothing will change. Ôishi would still rejoin his men for justice so Mika could take control of the kingdom and he would still either day in battle or by his own blade in the knowledge victory goes against his Shogun’s orders as an act of treason—necessary or not. Adding Kai to the fray becomes but one more opportunity for fantasy so he may take Ôishi to the land of his childhood enslavement for some cool, high-speed swordplay against big-eyed demon monks testing a warrior’s mind above body. The powers he forsook are there to help him see Kikuchi’s witch when no one else can as well as to battle her obviously inhuman strength so Ôishi may focus on Kira man-to-man.

If you’re going to take the time to inject a character like Kai solely for connective tissue to the otherworldly aspects you’ve already written, at least go for broke. This is 47 Ronin‘s biggest shortcoming: never relinquishing its real world footing so the visual artistry can intrigue on its own merits and not appear tacked on without legitimate reason. It had the potential to delve into Man with the Iron Fists territory yet proves too afraid to sever its ties with a history it forgot as soon as it decided to add witchcraft. This isn’t Game of Thrones; it doesn’t possess the tonal consistency to make us believe Kikuchi’s magic is believable in the context of the story. The filmmakers made it too cartoony for such suspension of disbelief and not cartoony enough for us to give in.

It’s too bad because the fight choreography is kinetic, the sets impeccably rendered, and Sanada a commanding force well aware of his fate to give us a three-dimensional character the film desperately wants to overshadow with Reeves’ two-dimensional character. Kai’s love story with Mika is always kept at arm’s length and his interactions with the samurai too cold due to his mysterious past to prevent his inclusion rom stalling the action with more explanation we don’t care about after rallying around Ôishi’s noble cause as a dutiful and loyal general. Kikuchi is tastily evil with a fun transformation into a Japanese dragon by the end, but like Kai serves as more plot device than true villain. Less is oftentimes more and everything meant to add excitement here sadly only detracts from what’s made the Chūshingura parable so enduring.

47 Ronin is now in wide release.