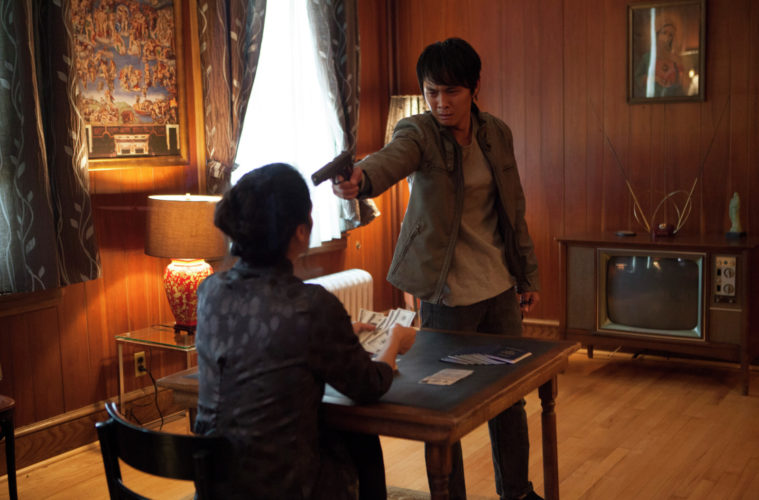 Directed by Andrew Loo and Andrew Lau and executive produced by Martin Scorsese, Revenge of the Green Dragon premiered at TIFF earlier this fall and has now landed in limited release. The crime drama follows an immigrant and his best friend growing up in a Chinese neighborhoods of New York City while being recruited for the gang The Green Dragons. It takes on the notion of a broken American dream by exposing immigration experiences and the workings of the gang. Based on a true story, both Loo and Lau sat down with us to discuss the project, how it differs from what they’ve done before, different facets of production, and more. Check out the conversation below.

The Film: Martin Scorsese won an Oscar for his adaptation of your Infernal Affairs and now he acted as executive producer for Revenge of the Green Dragons. Can you talk a little bit about his contributions to the film and how he got involved as producer?

Andrew Lau: Well, I mean he was very free hand. He trusts us. So actually he was free with whatever we want and told us to just go.

Andrew Loo: You know we figured it out in such an early stage. We were doing a movie about immigrant gangs, it’s New York, Lau, Scorsese — it all kind of made sense in a very organic way. There was a lot of interest to kind of make that package come together.

What was the process like of transforming a true story into 94 minutes?

Loo: The whole development process went well. Two producers from New York came to us in 2008 and they said, “Hey, we have this article,” and they sent it to me and I read it once then I read it twice. I didn’t understand anything. I thought, “This is so dense, there are so many characters, and different story lines. It’s circular. It doesn’t have a narrative flow to it at all.” And by the time you get through with you’re like, “Okay, it’s a very rich experience.” But at the same time, it could be a trilogy, it could be a 10-hour miniseries, so that kind of started us down the road of “Okay, let’s start checking out and doing some research so we get to know what issues were at play during that time period.” That really guided us in terms of how to make some creative choices on creating a 90-minute story from that original material. We eliminated characters, we consolidated characters. There were certain liberties we took which we felt were okay at the end of day because we felt we still always maintained this mandate of not necessarily doing a documentary about the Green Dragons, but making a film that was truthful to the gangs, what really happened, and also the time and the place things took place. How did you go about deciding location and costume to make it feel as authentic as possible?

Lau: Research. We looked at a lot of pictures.

Lau: Talk, talk, talk. We are not a big-budget movie. We had to choose the location very carefully. How many times did we go to location? A lot.

Loo: We looked at locations for half a year. Maybe eight months before we started shooting. As Lau says, we weren’t a big-budget film. We can’t approach it like The Truman Show where you actually build out entire streets to dictate a time or space. So, our approach was much more reductive rather than additive. It was about removing signs, removing cars, it was about trying not to show the cellular store that was across the store from our main house. Those things obviously don’t fit in with the period.

Mr. Lau, you’re from Hong Kong. Is this a story that held a special place in your heart or you felt personally connected to or one that grabbed your attention or just sparked interest?

Lau: You know I’ve shot a lot of gangster movies like Young and Dangerous but when Loo gave me this I looked and thought, “Oh, the Green Dragon. This is very interesting.” The name is pretty good, pretty cool, “Green Dragon.” And also the story is in New York, which is interesting, again. So that made me interested again to shoot a gangster movie. Also the backstory is very interesting. Why do people come to America? Like Hong Kong, people in 1997 were all immigrants. In that moment, 1983, so many people come to America and have that dream of getting more money and some people can and some cannot. Some people, before they get to America, die in the sea. This is quite interesting, it’s not only a gangster movie, and it is so many stories. It’s not only about killing people but it is so many things which made me interested. Also the tension is not like my movies before. We did quite well with the tension between people and even the dialogue, even with Paul to the young kids and the attitudes.

The movie chronicles the broken American dream. How did you go about doing so into the story and expressing that through the film?

Loo: I don’t think it was our intent to ever make a message film. But at the same time I think it is pretty clear to us that one of the main points of interest for us getting involved is this alternative perspective of the immigrant tale. I think the best stories you can tell are the ones you can find a personal connection to what’s going on. Our sort of dynamic in working together, Lau being born overseas and me being born in the states, we had our own sort of different complimentary connections with what’s going on in the story. Lau can definitely connect to these folks from Asia coming to America in hopes for a better life. For me there’s a family dynamic with these immigrants in America who are told, “Send me your tired send me your poor.” But when you get here the reality is incredibly different. Yeah, “Send me your tired, send me your poor so they can earn minimum wage in the back of a kitchen.” That’s the reality for all ethnic immigrants who are looking for a better life. “Hey welcome. Put on an apron, get to work.”

What was the most challenging aspect of the film?

Lau: Location. I mean the budget.

Loo: I thought the casting was challenging but ultimately very rewarding. There is not a huge talent pool to pull from when you’re talking about U.S.-based Asian actors. Yes, they’re out there, but a lot of times they don’t have the body of work to pull from where you can look at their films and their clips and say, “Oh yeah, they can play a leading man,” or “they can play someone who is physically imposing” or “we’re looking for a woman who has a real double sidedness about the way she speaks.” So it was a real challenge to be able to identify and audition and actually get to a point where we could populate our film with actors who could really pull off these rolls.

So when you first read the script you didn’t have any actors in mind? You didn’t think, wow, he has to play this role?

How long did it take to cast the film then?

How did you work to separate this from anything else you have ever done?

Loo: A lot of people have been touching on this in the last couple of days. Lau has done so many films that deal with Asian gangsters. I think the obvious difference there is that instead of it being Asian gangsters in Asia it is Asian gangsters in America. It’s just an interesting film. People keep asking us, “Is this about gangsters or a film about immigration? Is this a Chinese film or is this an American film? Is it meant for a Western an audience or is it meant for an Asian audience?” I mean I think the reality is that we came into this without any sort of preconceptions on any of those questions, but I think just intrinsically it was interesting that you had a blend of all of that. Even our working style and our personalities, there is a blend of all of that. It was one of those really interesting things where just the material, our personalities, the work, it all kind of was very consistent and very organically came together. I don’t think we set out to do something like “here’s my career path and this is the way I’m going, now I need to get here,” I don’t think it was that conscious. If you’re telling a story or any form of art I think there needs to be a personal connection to it. In order to get the best of yourself out of it, so yes you want to evolve and you want to grow but at the same time there needs to be a personal connection to what’s going on in the world. Otherwise you sell yourself short.

Lau: It is good, it is a challenge to do this sort of movie. Even for me who has experienced it, but with cost and location wise and the system it is different than in Hong Kong. It is a good experience. Revenge of the Green Dragons is now on DirectTV and in limited release.