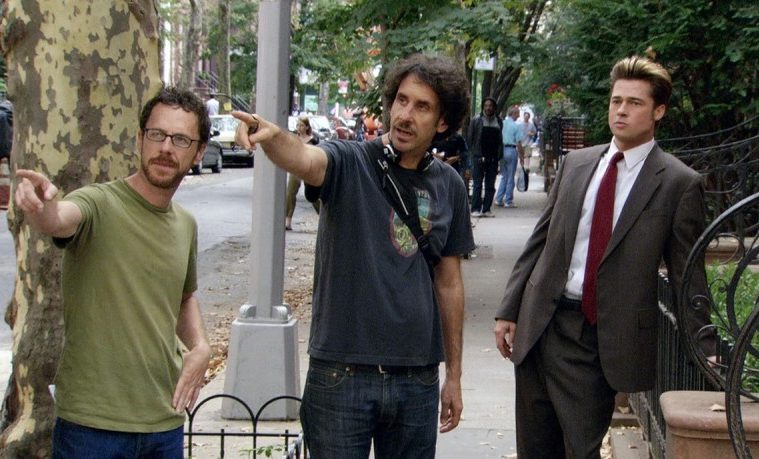 Fall is a fine time to submerge oneself under an afghan with a good book, and there are many new treats centered on cinema. From a Hollywood super agent’s tell-all to a comprehensive look at the Coen brothers, there’s plenty here to enjoy in between diving into leaf piles and clutching a pumpkin latte. The autumn cliches are now complete, so let’s move on.

One of the most thrilling photographers on the planet is Caitlin Cronenberg, the marvelous shooter of Drake’s Views From the Six album cover (the memorable shot featured the Canadian artist perched atop Toronto’s CN Tower), among other gems. Cronenberg’s latest project, a collaboration with art director Jessica Ennis titled The Endings, is her most stunning achievement to date. A series of photographic vignettes featuring the likes of Keira Knightley, Tessa Thompson, Julianne Moore, Patricia Clarkson, and Juno Temple, The Endings is audacious, gorgeous, and nakedly emotional. As American Psycho director Mary Harron puts it in her introduction, “Caitlin and Jessica think of these stories as stills from a film that was never made.” Indeed, each set of images carries the dramatic weight of a full-length film. Several “histories” at the book’s end outline the imaginary backstories of each vignette. Yet there is also room for the reader to imagine different tales. This is an extraordinary creation; a book of startling beauty and great mystery.

There was a time when no Hollywood titan wielded more power than Michael Ovitz. Those days are over, but the CAA co-founder and super agent brings that period to vivid life in his long-awaited memoir, Who Is Michael Ovitz? It’s a brisk, compelling read featuring a swath of cameos, including but not limited to Bill Murray, David Letterman, and Martin Scorsese. Ovitz comes across here as honest and self-effacing, while also justifiably proud of the role he played and the respect his position garnered. This is not the hit-job many anticipated. Rather, it’s a smart exploration of how projects like Schindler’s List came to be, and why a figure like Ovitz was often an essential part of the process.

The Coen Brothers: This Book Really Ties the Films Together by Adam Nayman (Abrams)

Adam Nayman’s The Coen Brothers is the book the directors of Blood Simple, Fargo, and No Country for Old Men have long deserved. A big, bold walk through every feature they’ve ever made (up to ending on Hail, Caesar!), this is, indeed, the book that really ties the films together. Nayman, whose book on Showgirls is another gem, finds insightful connections between films like The Hudsucker Proxy and Hail, Caesar! while also diagnosing the significance of each entry in the duo’s filmography. (“True Grit,” Nayman explains, “was a big-tent movie for the Coens”–in other words, a major box-office success with real cultural impact.) In addition to analysis, plot details, stills, and behind-the-scenes photos, the text includes interviews with collaborators like Roger Deakins and Carter Burwell. What is most endearing about This Book is that it spends a comparable amount of time on each entry in the Coens’ filmography. Even the lesser-regarded likes of Intolerable Cruelty and The Ladykillers are explored with thematic insight and detailed photographic analysis. There’s no doubt this is one of 2018’s must-own books for film lovers.

The story of Jho Low seems ripped out of fiction: a shady Wharton grad with an ability to raise billions of dollars produces films like The Wolf of Wall Street and befriend the likes of Leonardo DiCaprio. It couldn’t last, of course, and thankfully authors Tom Wright and Bradley Hope are here to show Low’s downfall in entertaining detail. It’s a story that seems to demand the big screen treatment, so fingers crossed that Billion Dollar Whale inspires a documentary adaptation.

Do we need another Marilyn Monroe biography? Yes, when it is fresh and insightful as Charles Casilio’s Private Life of a Public Icon. The screen legend’s tortured story is recounted with much new detail, especially the conflicting accounts of Bobby Kennedy’s whereabouts during Monroe’s final days. The reader finishes Casilio’s text in a state of sadness, but that is more than appropriate. There is quite simply no other emotion more fitting when pondering the end of Marilyn.

Alexander West is a unique and important writer about modern horror. In The 1990s Teen Horror Cycle, she digs into an era that is easy to overlook. In films like Scream and I Know What You Did Last Summer, West sees legitimate attempts at asking teen audiences to confront the nature of violence. It’s a fascinating thought, and the author also explores a number of films mostly ignored by the critical establishment, including Fear, Teaching Mrs. Tingle, and Idle Hands. As she stalks through these horror entries, it’s more than a nostalgia trip, making for a juicy read.

It seems like there’s a new Star Wars visual dictionary from DK every few months, and guess what? Each one is stellar. The latest, a new edition of The Complete Visual Dictionary, is the finest and most comprehensive yet. It features the prequel trilogy, the original trilogy, The Force Awakens, Rogue One, The Last Jedi, and Solo over the course of nearly 350 pages. As always, a plethora of visual delights are included, most memorably a full spread of the infamous Sarlacc that is sure to delight (and gross out) hardcore fans.

It’s quite interesting to watch Ron Howard’s enjoyable, underrated Solo: A Star Wars Story at home along with the deleted scenes, and then read Mur Lafferty’s novelization. Many of these deleted scenes are also included in the Hugo-nominated author’s book, and some of them–Qi’ra’s backstory, Han’s time as a pilot in the Imperial Navy–strengthen the story’s choppy first chunk. (Lafferty also makes the scene in which Han and Qi’ra reunite much more emotional.) This is certainly a case in which the novelization adds additional layer and texture.

This year marks the thirtieth anniversary of Die Hard, and Insight Editions is celebrating with three new books. First is Die Hard: The Ultimate Visual History by James Mottram and David S. Cohen, a wonderfully detailed run through the history of all five Die Hard films. Most interesting is the pre-production and production info related to John McTiernan’s original, specifically the project’s link to Frank Sinatra (the book on which the film is based was a sequel to Sinatra’s 1968 drama The Detective) and the names bandied about for John McClane (Schwarzenegger, Stallone, Burt Reynolds, James Caan, and, er, Richard Dean Anderson). The victor, of course, was Bruce Willis, and the rest is history. While the book becomes less compelling as the series progresses, it’s still tremendously readable. Next is A Die Hard Christmas, written by Doogie Horner and illustrated by JJ Harrison. Yes, this is a storybook version of the film that playfully answers whether Die Hard should be considered a Christmas movie. The illustrations are suitably delightful, and suitably violent. Lastly is a graphic novel sequel, A Million Ways To Die Hard, written by Frank Tieri and illustrated by Mark Texeira. Taking place thirty years after Die Hard, it features an older, now-retired McClane on the hunt for a serial killer. It’s a fine continuation, and certainly a more compelling McClane story than A Good Day to Die Hard. Note to Fox as they plan the inevitable next franchise film: Book Willis, bring back McTiernan, and let them rip.

As a parent, one of the joys of writing about film-related books is receiving examples tailor-made for my own kids. I knew that Star Wars Maker Lab: 20 Craft and Science Projects (by Liz Lee Heinecke and Cole Horton; DK) would be a hit in the Schobert household, and indeed it was. While many of the projects are a bit involved (an R2-D2 holoprojector, a Hoth snow globe), that’s part of the fun. And searching for the right materials makes this a nice weekend afternoon activity. Meanwhile, DK’s “build your own adventure” Lego books offer a nice blend of text (there’s generally a brief story) and detailed building instructions. The latest Ninjago edition, Greatest Ninja Battles, offers some neat ideas for young ones; my favorite is the food stall featuring wee fried eggs. And then there’s Batman: Flashlight Projections (by Jake Black; Insight Kids), a clever creation featuring cut-out windows featuring the Dark Knight and lots of villains. My phone flashlight proved perfect for this one, and the text is simple enough for beginning readers.

Speaking of kid-friendly releases, I can’t tell you the positive effect DK’s Marvel Studios Visual Dictionary (by Adam Bray) has had on my eight-year-old’s Lego building. He literally opens the book, pages through it until he finds an image of a superhero whose minifigure he has not yet acquired, and creates his own. But the book is not just for little ones. Any Marvel fan will find much to chew on in this wonderfully exhaustive collection of oddball character details (Pepper Potts’s ring was a gift from her grandmother!), close-up photos of weaponry (Hawkeye’s quiver!), and lots of backstories. A little too creepy for kiddos but fascinating for older fans is DC: Anatomy of a Metahuman, written by S.D. Perry and Mathew K. Manning, and illustrated by Ming Doyle (Insight Editions). It’s an anatomical breakdown of everything from Bane’s veins to Aquaman’s lungs, and it’s pretty stunning. Doyle’s illustrations, in particular, deserve a callout. And the last noteworthy entry for comics fans this month is DC Comics Absolutely Everything You Need to Know (by Liz Marsham, Melanie Scott, Landry Walker, and Stephen Wiacek; DK). This colorful guide is ideal for a lazy fan like yours truly, and I expect longtime followers will also find much of interest. Best of all is the presence of minor characters like Bizarro’s clone, Zibarro, and simian sleuth Detective Chimp. The latter deserves his time in spotlight, dammit.

A case can be made that The Tree of Life is one of The Criterion Collection’s most audacious and important releases in their history. While Terrence Malick’s 2011 film remains a bold, exhilarating viewing experience, what makes this 2018 release so noteworthy is what the disc includes. There is the film, of course, and the usual special features, some text (an essay from Kent Jones and Roger Ebert’s original review), and an expert restoration. But the cherry on top is the presence of Malick’s new, extended cut featuring an additional fifty minutes. The Brad Pitt-Jessica Chastain starrer that cuts between the dawn of creation, 1950s Texas, and the present day, in many ways, feels like an entirely new film. For more, check out Jordan Raup’s feature.

Nearly as exciting is Criterion’s release of Olivier Assayas’s Cold Water, a 1994 drama rarely seen in the United States. This tale of two teenagers in 1970s Paris features a party sequence that critic Girish Shambu, in a wonderful essay included in the booklet, says “might be the fullest and most ambitious expression of Assayas’s ability to wed his mastery of movement to a structural bedrock of music, a series of songs that accompany the episodes we witness.” Cold Water, then, would make a fascinating double bill with the director’s seemingly overlooked autobiographical 2012 drama, Something in the Air.