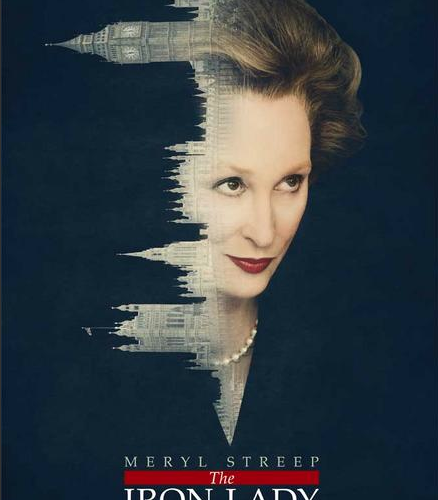 Posters for ‘The Iron Lady’, ‘The Rum Diary’, & ‘The Human Centipede 2: Final Sequence’ : The Good, The Bad and the Heinous The always mesmerizing Meryl Streep is already drawing Oscar buzz for her latest effort, the politic-centered biopic The Iron Lady, which centers on the life and times of glass-ceiling shattering British politician Margaret Thatcher. The Weinstein Company dropped an enigmatic trailer back in July, and now they’ve unveiled a deeply chic poster to whet moviegoer appetites for the film’s December 16th release. Personally, I adore this. Streep’s stern yet smiling face draws you in while the London skyline jutting from her face makes it seem like an esoteric Threadless t-shirt design. (And yes, one I’d buy.) Topped with the tagline “Never Compromise,” this promo poster demands attention and is sure to get it.

THE IRON LADY tells the compelling story of Margaret Thatcher, a woman who smashed through the barriers of gender and class to be heard in a male-dominated world. The story concerns power and the price that is paid for power, and is a surprising and intimate portrait of an extraordinary and complex woman.

Next up is the premiere poster for Johnny Depp’s return to the world of Hunter S. Thompson strangeness in the adaptation of his novel The Rum Diary. [View the cheeky trailer here.] The Rum Diary hits theaters on October 28th, 2011. [Image courtesy of  The Daily Blam]

Yaaaaaaaawn! Yes, Johnny Depp is a major international megastar sure to lure in movie goers with his mug alone, but this shot showing a sketchy looking and lightly mustachioed Depp is deathly dull with no hint to the film’s plot beyond the mediocre tagline, “Absolutely Nothing in Moderation.”

Based on the debut novel by Hunter S. Thompson, “The Rum Diary” tells the increasingly unhinged story of itinerant journalist Paul Kemp (Johnny Depp). Tiring of the noise and madness of New York and the crushing conventions of late Eisenhower-era America, Kemp travels to the pristine island of Puerto Rico to write for a local newspaper, The San Juan Star, run by downtrodden editor Lotterman (Richard Jenkins). Adopting the rum-soaked life of the island, Paul soon becomes obsessed with Chenault (Amber Heard), the wildly attractive Connecticut-born fiancée of Sanderson (Aaron Eckhart). Sanderson, a businessman involved in shady property development deals, is one of a growing number of American entrepreneurs who are determined to convert Puerto Rico into a capitalist paradise in service of the wealthy. When Kemp is recruited by Sanderson to write favorably about his latest unsavory scheme, the journalist is presented with a choice: to use his words for the corrupt businessmen’s financial benefit, or use them to take the bastards down.

And lastly a truly gruesome promotional poster for a sequel to the wholly horrific The Human Centipede. The teaser for The Human Centipede 2: Full Sequence hit the web earlier this month promising to bring its twisted and bleak tale to gore-seeking audiences on October 7th. Yup. Lots of bound naked victims presumably stitched to each other in horrible ways with the tagline “100% Medically Inaccurate” as a not-so-subtle callback to the first film’s claim to be “100% medically accurate.” While I loved The Iron Lady’s poster, this is one I can’t stand to look at, which I’m sure is the point…I’m going to go down some Mylanta now.

What do you make of these posters?