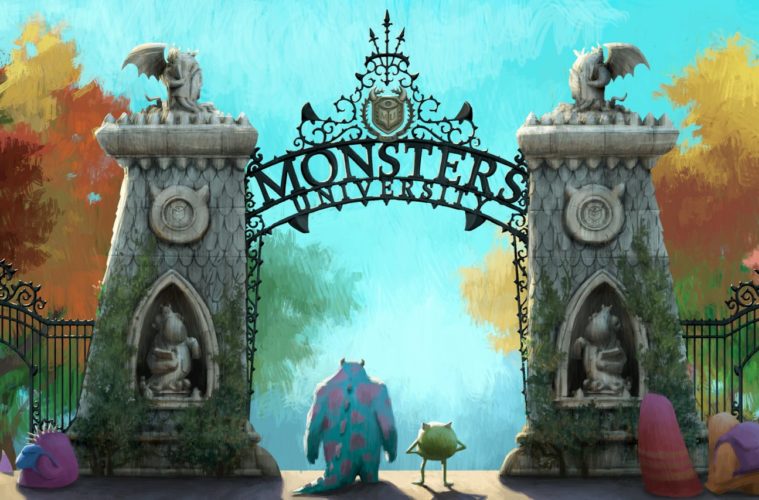 Pixar Provides First Look at Upcoming Dinosaur, Inside the Mind and Day of the Dead Films Although they’ve been a bit lambasted the last few years for critical duds like Cars 2 and disappointments like Brave, Pixar has a bright future ahead with a batch of original projects and they’ve decided to kick things off right in 2013 by showcasing some first look art for them.

Sent to Coming Soon, the studio revealed four pieces of concept art in a holiday card. First up, above, one can see a previously released image from this June’s Monsters University, the only non-original project in the batch. Below, we can see our first look at The Good Dinosaur, directed by Up‘s Bob Peterson. Released on May May 30th, 2014, the film will ask the question, “What if the cataclysmic asteroid that forever changed life on Earth actually missed the planet completely and giant dinosaurs never became extinct?”

We’ve also got the first concept art from Inside Out aka The Untitled Pixar Movie That Takes You Inside the Mind. Set for a June 19th, 2015 release, the film, directed by Up‘s Peter Docter, has been described as one that “place inside of a girl’s mind and it is about her emotions as characters, and that is unlike anything you’ve ever seen.” Lastly, we’ve got an image from The Untitled Pixar Movie About Dia de los Muertos. From Toy Story 3 director Lee Unkrich, the film is aiming for a 2016 release and will wholly feature the “vibrant holiday of” the Day of the Dead. One can see it below as we look forward to more information coming regarding these releases, with a likely teaser for The Good Dinosaur attached to Monsters University this summer.

Which Pixar film are you most looking forward to?