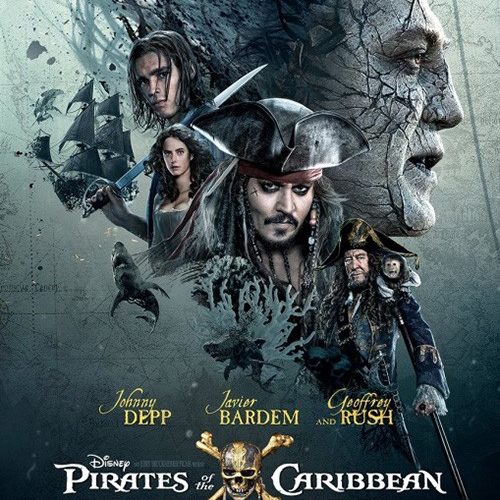 Review: ‘Pirates of the Caribbean: Dead Men Tell No Tales’ is an Overwrought, Unimaginative Adventure

Dead men tell no tales, and the Pirates of the Caribbean franchise should really stop telling them too. Unfortunately, Disney’s been beating this dead horse for far too long, and the fifth entry into the franchise is no exception. As the coldly calculated Pirates of the Caribbean: Dead Men Tell No Tales proves, it is time to let this series rest in peace, or at the very least, spend the rest of its doomed, immortal days sinking to the bottom of the ocean.

The film opens with fraudulent promise as the young son of forever-cursed Will Turner (Orlando Bloom) and Elizabeth Swann (Keira Knightley) is sinking himself to the depths of the deep blue, where he lands upon the deck of the Flying Dutchman. Once on board, Will Turner’s son Henry (Brenton Thwaites) argues with his barnacle-faced father, insisting that he knows how to break the curse that’s been set upon him and his crew — which, if you don’t remember, traces back to Pirates of the Caribbean: At World’s End, when Will Turner is condemned to an immortal life ferrying the souls of those who died at sea to the next world —  by finding the Trident of Poseidon. Will Turner shoos the boy away, telling him to leave behind the sea and to stay away from pirate life… but, of course, we know that’s not going to happen.

Flash forward to a decade or so to Henry’s crew life aboard a British ship. After entering the Devil’s Triangle (against Henry’s warnings, mind you) the ship is attacked by a crew of dead pirates, led by the terrifying Captain Salazar (Javier Bardem). As the title suggests, dead men tell no tales, so Salazer leaves one man alive from the attack, Henry, to share the story. He also tells Henry to find Captain Jack Sparrow (Johnny Depp), who caused Salazar and his crew’s curse to befall them.

Once back on land, we’re introduced to Carina Smyth (Kaya Scodelario), an astrologer and horologist, currently being chased down by the Redcoats for being a suspected witch. Naturally, Carina is after the Trident of Poseidon too, because she was orphaned as a baby and the only possession she owns is her father’s diary, which holds his dozens of calculations in trying to find the map that will lead to the trident. So Henry and Carina are after the same trident (remember, Henry needs it to save his father aboard the Flying Dutchman), and they make a deal to help each other find it.

Within the first twenty minutes, the storyline already feels weighty, carrying more than it can possibly manage to chew in the two-plus hours it has allotted itself. For the rest of the journey, things really start to go downhill, slamming in every possible character, conflict, and battle that is possible in the remaining two hours, leaving little room to make anything actually cohere, resulting in a mess of a movie. Less is more, but apparently neither of the two directors, Joachim Rønning and Espen Sandberg, thought so. Coming off their Oscar-nominated work in Kon-Tiki, it’s a true shame they couldn’t reignite the spark here.

Enter Jack Sparrow, introduced drunk and asleep in a bank safe. Long story short, Sparrow’s debut scene turns into a wild chase, where the entire bank building is dragged throughout the town with the ever-odd captain riding on top of it. After the bank robbery comes to an end, and Sparrow and his crew check out their winnings, they find that the safe is empty, having spilt all its contents along the town’s streets during the chase. Sparrow’s crew resigns, calling their captain a washed-out nobody with a sorry excuse for a ship. So what does Sparrow need? The Trident of Poseidon, of course.

To further add to the mayhem, Captain Barbosa (Geoffrey Rush) jumps into the storyline, making a deal with Salazar to bring him Jack Sparrow. And somehow, the Redcoats find out about the Trident of Poseidon and decide that they need to take it for their own — despite never believing any of the pirate myths before. That’s the setup, but if you’re not following, that’s okay. There’s really no point, as from this signpost on, the overwrought narrative is weak and there’s slim-to-none character evolution anyhow.

Incessant action scenes take over the majority of Dead Men Tell No Tales, with Rønning and Sandberg relying on animated ghost sharks, pirate ship chases, and even an impromptu hokey marriage ceremony after Sparrow and his companions are caught while running away from the dead pirates on an assumedly abandoned island. Rushing to get to the next action beat, there’s little time spent on creating empathetic (or even interesting) characters. Henry and Carina’s love story imitates that of Will Turner and Elizabeth Swann’s (sassy female falls for good-hearted, non-pirate dude); a somewhat intriguing witch, Shansa (Golsifteh Farahani), is brought in for two scenes where we learn little about her but are supposed to be spooked out by her abode regardless; Henry’s desire to save his father becomes virtually nonexistent; and worst of all, Jack Sparrow feels like a tired character that reads off predictably “clever” one-liners while giving off even more predictable expressions.

It’s hard to blame Depp for the demise of Sparrow as the script truly doesn’t allow for any sense of a fully-formed character in Dead Men Tell No Tales. The captain’s portrayed as a drunken fool with no ambitions, no wants, and no desires, making his surface-level character falls flat in every scene. His lines don’t garner a chuckle or strike any chord of emotion because there’s no intention behind them, causing Depp’s performance to be a far cry from his introduction fourteen years ago. The film’s one grace (though it’s not saving), is Bardem’s performance as Captain Salazar and the teenage flashbacks of Jack Sparrow (portrayed by Anthony De La Torre). In these sections there’s a semblance of a story worth telling between the two, giving the actors something to work with.

All in all, this latest outing is one excuse after another to insert a chase or pirate fight, but rather than adding popcorn-chomping excitement, these sequences actually weigh the film down. Say what you will about Verbinski’s bombast in his back-to-back outings, but his vision is missed here: there’s little change of pace happening beat to beat, and when too many action scenes follow too many actions scenes, it’s easy to zone out. Scripted by Jeff Nathanson (Tower Heist, Catch Me If You Can), the writer does little to genuinely build the loyalties and love projected on screen between our ensemble. Why does Henry fall for Carina? No idea. How about why the witch Shansa is connected with the Redcoats? I couldn’t tell you. And for what reason does Sparrow feel the need to help Henry survive at the film’s climax? It’s lost on me.

Capping things off with some lame twists and a bit of fan service in the finale, if you’re really desperate for some pirate action, watch the original, which has storyline that can carry itself, some character development, and certainly not least, a Captain Jack Sparrow that still has some light in his eyes.

Pirates of the Caribbean: Dead Men Tell No Tales opens on Friday, May 26.