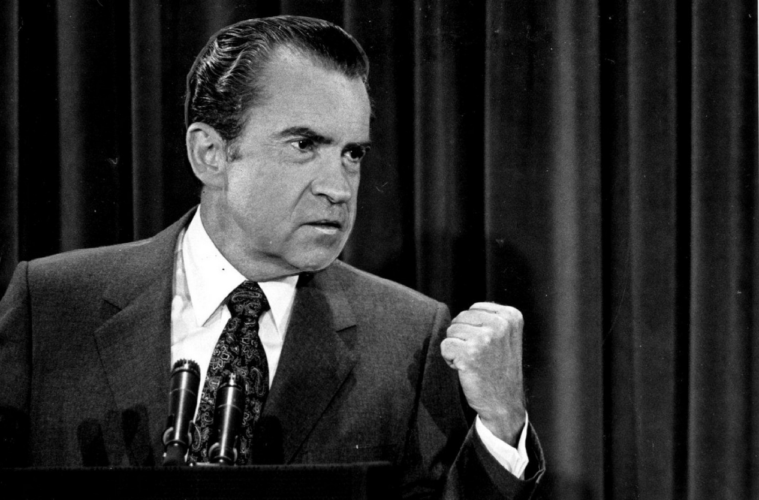 If you fit right in the middle of that very special Venn diagram comprising “cinephile” and “Richard Nixon enthusiast,” we have an absolute treasure. As an appendex to Nixon at the Movies: A Book About Belief, Mark Feeney and the University of Chicago (via @vrizov) published a more-or-less-complete log of films Nixon watched while in office, where they were viewed, and, in most cases, on what date. According to the university’s site, these are “primarily drawn from the President’s Daily Diary, which was kept by the Secret Service throughout his presidency.” After the Secret Service suggested these aspects of Nixon’s life be kept at bay in light of Watergate, other, reliable sources came into play: “The Haldeman Diaries; a 1970 memorandum Rose Mary Woods prepared in response to a Newsweek query as to what films Nixon had seen while president; or, from the second half of December 1973 until August 1974, the personal logs kept by White House projectionist Paul Fisher.”

The organization of their page isn’t very share-friendly, so you’ll have to click on the above link and scroll through — so long as this stuff fascinates you as much as it captivates me. (Given my ardent Nixon… “fandom,” we’ll call it, I understand that the odds of this are a bit wonky.) But again: those of us who care will spend a good amount of time poring over this list, in some cases desperately wanting to get a peek inside his head about these choices. (Scroll down to the section on Patton for some idea as to why.) What did he think of A New Leaf? Was he on a little noir kick when watching The Postman Always Rings Twice and The Blue Dahlia on back-to-back nights? Of the several John Ford films viewed, did he have a favorite? What, exactly, compelled him to pick It’s a Wonderful Life and Around the World in 80 Days as his final viewings? I should probably stop; otherwise, I’m going to be here all day.