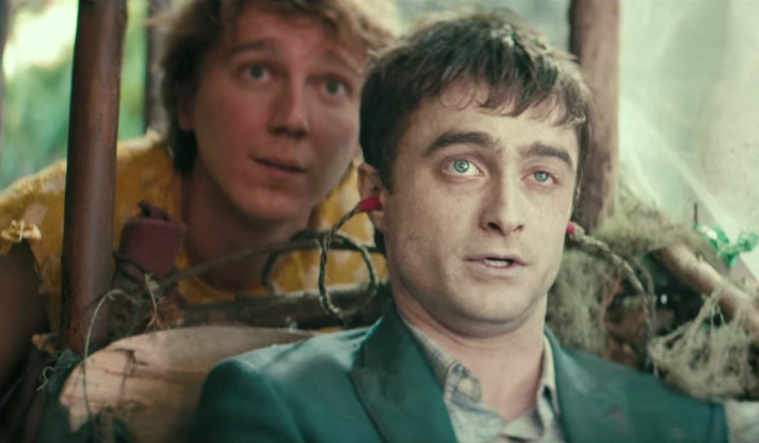 Sure, we haven’t seen the majority of films from 2016 yet, but we’ll make any bet that you won’t witness any other one like Swiss Army Man in this calendar year — or any other, for that matter. Affectionally dubbed the “farting corpse drama” at Sundance this year, it finds Hank (Paul Dano) on a remote island by himself after a boating trip stranded him. Seconds away from ending this desolate existence by hanging himself, he spots a washed up body on the beach, “played” by Daniel Radcliffe. What follows is a wholly one-of-a-kind experience, and if you want a sneak peek, the first trailer and poster have landed today ahead of a summer release by A24.

I said in my review, “This set-up could easily make for one of the silliest, off-putting films that has ever graced Sundance — in U.S. Dramatic competition, no less — yet the directing duo bring an unexpected layer of emotion to the story, even if it ends up getting eventually repetitively muddled. As Hank and “Manny,” as Radcliffe’s corpse is later dubbed, progress on their journey, themes of loneliness, isolation, true love, and more emerge.”

A wholly original, enormously entertaining, and deeply heartfelt look at what it means to be human, Swiss Army Man is the feature film debut of acclaimed music video directors Daniel Scheinert and Daniel Kwan (collectively known as DANIELS, and responsible for the beloved “Turn Down For What” video, among many others). Bursting with limitless creativity in both form and content, Swiss Army Man goes from the absurd to the emotional to the whimsical to the profound and back again.

Hank (Paul Dano) is stranded on a deserted island, having given up all hope of ever making it home again. But one day everything changes when a corpse named Manny (Daniel Radcliffe) washes up on shore; the two become fast friends, and ultimately go on an epic adventure that will bring Hank back to the woman of his dreams.

Swiss Army Man creates a world like no other—a place of pure fantastical imagination, brimming with magical realism yet featuring two characters whose dreams and fears are entirely relatable. Dano and Radcliffe both fully commit to their directors’ audacious vision, and their work is exceptional, finding the perfect balance of humor and heart that drives the whole film. A celebration of all the wonders cinema has to offer, Swiss Army Man is ultimately all the more remarkable for using its dazzling originality to tell a universal story of human complexity and connection.