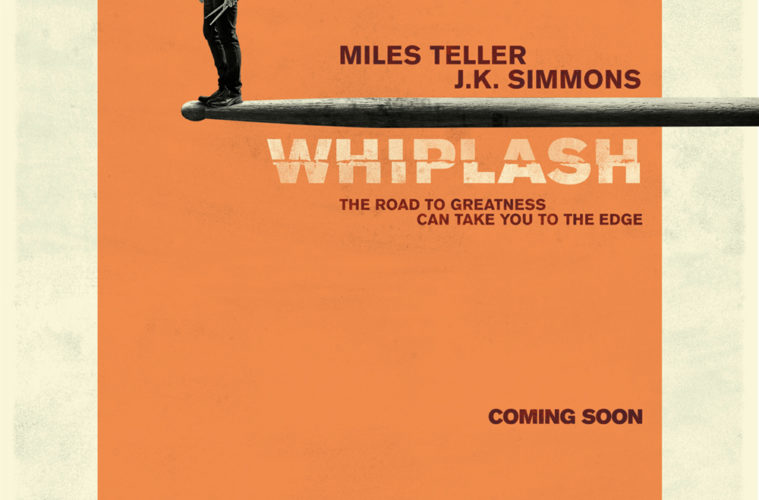 Late in Whiplash, Terence Fletcher, studio band leader and instructor at Shaffer Conservatory of Music, argues that “the most harmful words in the English language are good job.” With his sophomore feature, director Damian Chazelle has concocted a kinetic film consisting of stunning musical sequences, bold characterizations, and bombastic language. Describing Whiplash as a “good job” isn’t enough — it’s “good drama” with the rare ability to cause a frenzy amongst viewers like it did at its Sundance debut.

The opening sequence presents Whiplash‘s best qualities. The camera roves slowly down a hallway towards Andrew Neyman (Miles Teller) and his drum kit. Teller, as the aspiring jazz musician Andrew, convincingly plays with a sense of unguided and wild creation. This moment is interrupted by Terence Fletcher (J.K. Simmons), who appears as an apparition and immediate foil to Andrew. Terence barks out orders like “double-time swing” and Andrew does his best to appease the jowly figure hovering over his drums. The stakes and consequences for both instructor and pupil shifts as the film continues, but Whiplash is able to repeat the formula of this initial scene and prove captivating through each subsequent iteration. Whiplash derives much of its potency from its jazz music. There is a focus and precision to Fletcher’s band, which Andrew is recruited to. They tune and unpack their instruments in somberness, Chazelle keenly capturing the ritualistic aspects of this group. Musical sequences are beautifully constructed with camera moves echoing great concert films like The Last Waltz and Stop Making Sense, and the entire film is punctuated by close-ups of instruments, mid-play, set to the tune of the music. It is the relationship between professor Fletcher and student Andrew, however, that imbues Whiplash with its most compelling moments. There is an attraction between student and teacher: Fletcher sees a pliable young artist, while Andrew sees a mentor figure who can help him realize his fantasy of becoming an artist of worth — someone like Buddy Rich.

Their partnership is threatened by outside factors. Andrew spends time with his aloof father (Paul Reiser) and pursues his romantic interest, a young concession-stand employee named Nicole (Melissa Benoist). Chazelle is economic with these story lines but allows them to resonate as counterpoints to Andrew’s vitriolic musical apprenticeship under Fletcher. There is a terrific suspense sequence where Fltecher sifts through each section of his band to find a member who has played out-of-tune. Here, his sadistic methods of teaching (namely verbal abuse and the occasional thrown chair) reveal themselves. Simmons is completely unhinged, using every combination of swears he can conjure and offers malicious questions like, “Alternates, you want to clean the blood off my drum kit?” Inversely, Teller is a stoic screen presence. He is forced to endure homophobic tirades, relentless speed drills, and replacement drummers hounding for his spot in the band. Both actors are operating so highly at their respective ends of the spectrum that the film feels inherently balanced.

Whiplash is most interesting when it explores the pitfalls of an artistic career. For any aspiring writer, painter, or musician, there will be disconcerting scenes. One example: Andrew is confronted at a dinner by his father and family friends about his music career. Eager to denounce his silly foray into music and quick to champion the practical achievements of the other young members, the dinner patrons tap into a greater societal devaluation of art. Perhaps this bitterness drives a man like Fletcher to such tyrannical ends, though the film never offers the reasons for his behavior.

Whiplash feels dynamic and fresh because it capitalizes on every tonal shift and detail. There are moments that are powerful, though askew, like a surprisingly tender monologue in which Fletcher recounts a former student who has passed away. Scenes in the third act, including Andrew’s near-deadly sprint to a performance and Fletcher’s moral justifications, feel like momentary missteps. Somehow, they become pivotal foundations for Chazelle’s stunning conclusion, thus making Whiplash an even greater achievement.

The near-wordless finale finds the pull between professor and student changing in every passing note. Having pushed both Teller and Simmons to career-best performances, Chazelle, a dynamic young storyteller, finally allows the music to speak for itself and ups the technical craftsmanship and energy one final time.

Whiplash is playing at NYFF and will be released on October 10th, courtesy of Sony Pictures Classics.