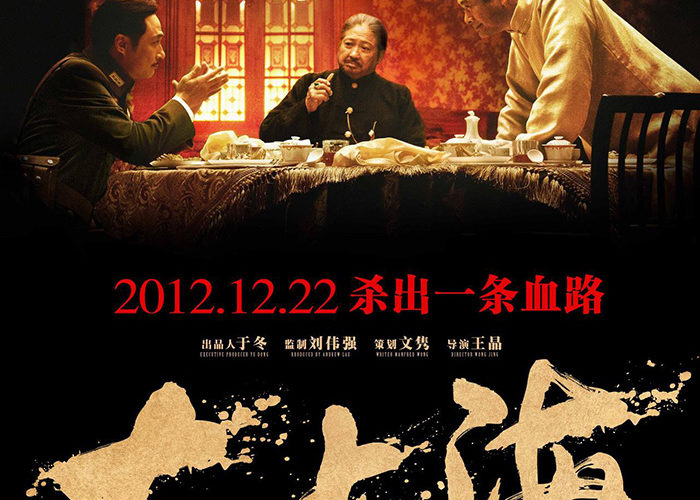 Director Jing Wong’s 大上海 [The Last Tycoon] is an intriguing entry to the period gangster genre that depicts the weight of triad influence in 1930s Shanghai at the cusp of war with an invading Japan. Co-written by Wong, Koon-nam Lui, and Manfred Wong, the plot’s loose inspiration comes from “Big-Eared” Du Yuesheng—a Chinese triad boss who figured into the Second Sino-Japanese War much like his fictional counterpart Cheng Daiqi (Chow Yun-Fat) here. It’s a story about power, honor, and love as we catch glimpses of Daiqi’s growth into the most notorious crime lord in Shanghai. A formidable foe with loyal friends, he becomes a king with but one thread still connecting him to his youth: the beautiful Ye Zhiqiu (Yuan Quan), an opera performer whose parallel trajectory could never feasibly align with his. A young man with grand aspirations of success in 1913, it’s a false imprisonment for murder that lands Daiqi inside a jail cell with the mysterious Mao Zai (Francis Ng) right before the man’s escape plan goes off. With freedom only assured from his new acquaintance in return for proving his “strength” in killing the man who framed him—their jailer—the boy’s life is indelibly changed with the press of a trigger. From here Daiqi makes his way to Shanghai, becomes apprentice to triad boss Hong Shou Ting (Sammo Hung Kam-Bo), and quickly ascends the ranks thanks to his fearlessly cunning scheming. Eventually surpassing his master in stature, Daiqi heads to Beijing a success for a planned reunion with Zhiqiu. Unfortunately bringing his enemies along, a church shoot-up opens the girl’s eyes to what he’s become.

It’s a sprawling epic full of flashbacks that begins with Daiqi circa 1937 earning applause for his charity in helping organize a show about to bow before him. From here we go to his and Zhiqiu’s meeting in 1913, watch his move to Shanghai underworld, and understand just how far the once innocent fruit stand employee has changed into a cold-blooded killer. We see two more meetings between he and his first love—the aforementioned assassination attempt and her later arrival to his city with husband Cheng Zhaimei (Baiqing Xin) in tow; are introduced to Daiqi’s most trusted man, the switchblade twirling Lin Huai (Hu Gao); and witness the familial bond shared by Shou Ting, his wife, Daiqi and his (Monica Mok’s Bao). And Mao Zai returns to reveal he is a Chinese general. With so many characters and years passing by, however, nothing is too difficult to understand once the Japanese arrival causes each to pick sides. The triad becomes a necessary ally to the Chinese military due to their financial portfolio, leaders like Daiqi and Shou Ting prove major commodities for the enemy to acquire, and selfish desire turns allegiances as those on the losing side become traitors in order to save their own skin. The Battle of Songhu is shown in explosive detail as a backdrop to Daiqi and Zhiqiu’s unrequited love; gunfights occur often with Daiqi and Lin Huai fearlessly mowing down whomever gets in their way; and the politics of the war’s aftermath rear their head to usher in an elaborate plan to regain control of the city our antihero has cherished since his boyhood dreams.

This final climactic table turn is the film’s centerpiece, culminating in its portrayal of characters that have evolved immensely from our first introductions. What used to be a gangster’s life of murder transforms into an honorable quest to save China from its invaders as street beefs for turf become battles possessing much heavier stakes. With everyone—even Zhiqiu—getting their hands dirty for the cause, The Last Tycoon ultimately glorifies the triads for their help in pushing back the Japanese. Love and kinship come into play too as motivating factors for these men and women to willingly put themselves in danger and in the end proves a shining example of the power wrought from defending what’s yours. Daiqi and the others spilled blood to control the city of Shanghai and they won’t surrender it. With nice performances from all, special note goes to Ng’s villainous Mao and Li Yuan’s pragmatic Ling Husheng—Shou Ting’s wife. These two find themselves needing to go to the darkest places of anyone whether for bad or good and each is up to the task. Hu Gao possesses a stoic severity; Quan Yuan the heavy emotion of watching her world fall apart; and Hung Kam-Bo a jovial demeanor that earns the respect Daiqi has cultivated in him. Every character makes a sacrifice by the end for love, honor, country, or all of the above and Jing Wong strings them together with a sure hand for drama and action. The gunplay is destructive and exhilarating while the Battle of Songhu tugs at heartstrings before the rousing finale mixes both in its bittersweet resolutions.

Having Chow Yun-Fat at its center assures we will receive the tenacity and compassionate regality we’ve come to expect throughout his legendary career. It may not be the meatiest role ever—kudos to younger counterpart Xiaoming Huang for portraying his earlier years—but the actor still rises to the occasion when necessary. He plays this gangster with an intriguing combination of affable charm and formidable wile, scaring his adversaries more by a smile than a gun because of his unwaveringly confident delivery of requests all know he has the means to back up. Daiqi is a “bad guy” we feel comfortable aligning ourselves with when his true nature to help friends and family comes out. He’s a gangster with a heart of gold; a crime boss who becomes Shanghai’s last line of defense.