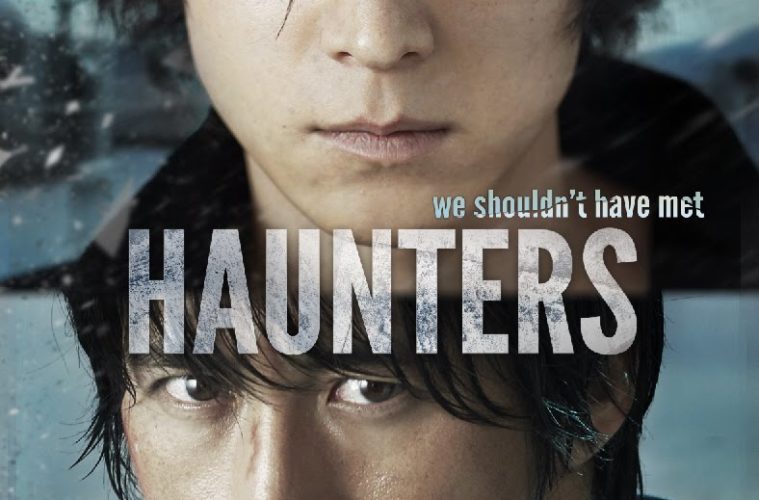 Writer/director Min-suk Kim’s Haunters is a South Korean flick currently featured at the New York Asian Film Festival.  The original Korean title of the film, Psychic, makes much more sense than what it eventually settled with, as Haunters really doesn’t have much to do with the plot line.  Kim’s previous 2008 screenplay for The Good, The Bad, The Weird was pretty strong, but the same scope of work doesn’t shine through on Haunters. After an abusive childhood of being imprisoned and blindfolded, Cho-in (Dong-won Kang) has to rely on a wooden prosthetic leg.  Along with being physically abused, both his parents attempted to kill him.  But Cho-in was born with an amazing supernatural gift.  He can use mind control on anyone within his line of sight.  After freeing himself from the binds of his parents, he survives the streets by using his powers of persuasion to rob and thieve small businesses around town.

But one day, Cho-in walks into the Utopia pawn shop to rob the safe not expecting much resistance.  Instead, Cho-in is surprised to find someone working in the shop that is immune to his abilities, Kyu-nam ( Ko Soo).  After successfully fleeing the scene, Cho-in considers the exisitance of Kyu-nam a threat to his endeavors and seeks out to eliminate him.  Kyu-nam enlists the help of friends to chase after Cho-in.

Haunters is a decent fight and chase film. The pace is quick and the fighting atmosphere that the protagonist and antagonist are presented is constantly changing and evolving to give us more dangerous and enthralling scenarios. While the premise of the movie is a decent one, the lack of backstory leaves this film feeling like a cheap run-of-the-mill action flick thrown together to make a buck.  While the special effects are sparse, they are however used well.  Where did these powers come from?  How is Kyu-nam the only one that seems to be immune?

We’re never given the answers to questions such as these.  If you enjoy thoughtless action thrillers, then maybe this film is for you.  But if you expect something deeper and more complex from your films, look elsewhere.  A film with such notable Korean stars and moderate budget could have used a more elaborate script and story line.  While I did enjoy this film and think the idea is clever (not counting the obvious X-Men knockoff), I wish it had been more fully developed and given the chance to become something more complex and full.

Haunters is screened at the New York Asian Film Festival.