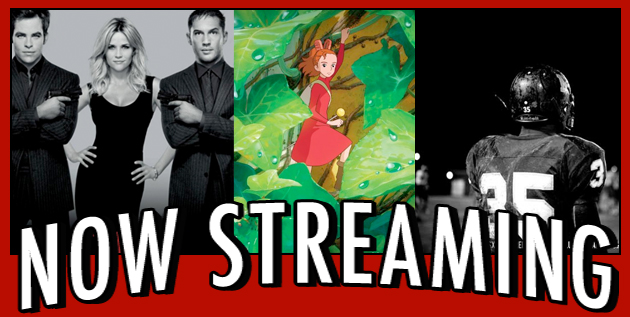 [Now Streaming] Your ‘This Means War,’ ‘The Secret World of Arrietty’ and ‘Undefeated’ Alternatives Each week within this column we strive to pair the latest in theatrical releases to worthwhile titles currently streaming on Netflix Instant Watch. This week we offer alternatives to This Means War, The Secret World of Arrietty and Undefeated.

Tomorrow in theaters it’s spy versus spy when two secret agents become romantic rivals, a scrappy underdog team fights their way to football glory and a teeny teen discovers a grand new world. But if you want more action-romance-comedies, more heartwarming sports tales, and more spirited adventures with pint-sized protagonists , we’ve got you covered with the best titles Now Streaming. Do you desire more love, action and laughs?

Charade (1963) In this cheeky classic, Audrey Hepburn stars as a widow who is utterly bewildered when she discovers her husband was hiding a criminal double life. Now she’s on the run from a pack of fearsome thugs who are seeking an elusive fortune, and falls into the arms of a mysterious and dashing older man played by the wildly charismatic Cary Grant. Walter Matthau and James Coburn co-star.

Bird on a Wire (1990) Goldie Hawn stars as a hot-shot attorney whose life is thrown into free-for-all when she happens across and old lover (a pre-breakdown Mel Gibson) whose long been in the Witness Relocation Program. After she accidentally reveals his true identity, he’s forced to go on the run from the drug dealers who want him dead, and he’s taking her along for the ride whether she likes it or not!

Shaolin Soccer  (2001) This whimsical masterpiece from Hong Kong writer-director Stephen Chow combines the classic good versus evil showdown arc with the majesty of soccer! The result is a comedy that is chock-full of sidesplitting humor, wild action sequences, and witty allusions. There’s even a sweet yet dorky love story between Chow’s impoverished soccer player and a shy but skilled baker (Wei Zhao).

This Oscar-nominated documentary centers on the Manassas Tigers, an underdog football team that’s offered  a chance at greatness thanks to the tireless devotion and diligence of coach Bill Courtney. Charged up for more sport-centered docs?

Hoop Dreams (1994) “People say to me, ‘Will you remember me if you make it?’ And I say, “Will you remember me if I don’t?” This heralded doc centers on the poignant and incredible tale of two boys who see basketball as the only real way out of the Chicago slums where they grew up. As they strive to score baskets to win the notice of college recruiters, we’re allowed a rare look at their lives, their families and their struggle to do right by each other.

Lipstick & Dynamite (2004) Finally, for something a bit wilder, try this doc that explores the rise of women wrestlers in the 1940s and ’50s through the outrageous exploits of such fearsome females as Ida May Martinez, Gladys “Kill ‘Em” Gillem Long and the league’s Grande Dame, The Fabulous Moolah. This is one doc that’s a stunner!

Based on Mary Norton’s beloved Borrowers‘ books, this spirited adventure penned by Howl’s Moving Castle’s Hayao Miyazaki centers on a little—as in four inch tall—teen girl who is on the verge of adulthood and the brink of discovering the grand word of adventure just outside her doll-sized house. Thumbelina (1994) This charming musical centers on a thumb-sized teen whose thinks her dreams have come true when she meets an absolutely enchanting fairy prince who promises to make her his bride! But after he buzzes away on his bumblebee steed, Thumbelina is kidnapped by a family of frogs who want to force her to wed one of their kin. Now her prince must find her before she can no longer fight off the frogs! Don Bluth directs.

The Secret of NIMH (1982) Another Don Bluth tale, this one follows a timid, widowed field mouse, Mrs. Brisby (Elizabeth Hartman), who must venture into the treacherous world beyond her humble home to save the life of her pneumonia-stricken son. There she meets a loud-mouthed crow (Dom DeLuise), a mighty sorcerer (Derek Jacobi), and a gallant rat (Peter Strauss) who show her the greatness beyond her patch of grass.

The Secret of Kells (2009) And finally, a tiny hero that’s the biggest of this bunch. Well-suited to Oscar season is this 2010 Oscar-nominee that centers on a young boy who lives among a brotherhood of monks and wants nothing more than to contribute to their glorious illuminated text, the magnificent book of Kells. But to do so he must trek into the peril-filled forest to secure the ingredients for the special ink required. There he meets a puckish sprite and is forced to face his own inner demons. More than a visually rich adventure, this animated wonder is also an allegory about the drive and fear inherent in creating art. Eagle vs. Shark (2007) Loren Horsley stars in this New Zealand import as Lily, a painfully shy fast food worker who finally wins the notice of her crush, electronics store clerk Jarrod (Flight of the Conchords’ Jemaine Clement), at his  “dress as your favorite animal” party. From there, the two begin a peculiar romance that leads Lily to accompany Jarrod on his quest to get revenge on the bully who tormented him in high school.

When originally released, this offbeat offering was unfairly—and superficially–compared to a more high-profile comedy about social misfits: Napoleon Dynamite. But Eagle Vs. Shark is a uniquely realized tale about the desire to be accepted; Lily just wants Jarrod to love her, and Jarrod is dying to get his family (especially his father) to revere him the same way they revere his older brother (played pitch perfectly by the writer/director Taika Waititi). This leads to some truly heartbreaking and beautiful moments in between all the awkward conversations, quiet humor, and strange yet well-suited animated sequences.

On the surface, this may just look like just another quirky indie rom-com, but Eagle Vs. Shark has so much more going for it than it’s been given it credit for. It offers a heartbreaking story of love and acceptance, features powerful performances from both Horsley and Clement, and showcases a fun and spirited cast of supporting characters. Simply put, it’s worth checking out, especially if you’re still feeling romantic post-Valentine’ Day. And who isn’t, am I right!?