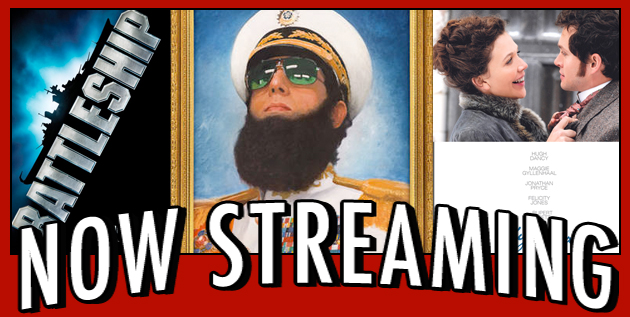 [Now Streaming] Your ‘Battleship,’ ‘The Dictator,’ and ‘Hysteria’ Alternatives Each week within this column we strive to pair the latest in theatrical releases to worthwhile titles currently available on Netflix Instant Watch. This week we offer alternatives to Battleship, The Dictator, and Hysteria.

It’s the Navy versus extraterrestrials in Peter Berg’s star-studded adaptation of the popular board game. Liam Neeson, Alexander Skarsgard and Rihanna co-star. The armed forces against alien forces:

Pitch Black (2000) When an interstellar flight crash lands on a dangerous planet, a by-the-book pilot and a sneering convict must team up to help those stranded survive a night plagued by an army of creatures whose only weakness is light. David Twohy directs; Radha Mitchell and Vin Diesel co-star.

The Iron Giant (1999) For something more kid-friendly, check out this heartwarming, Cold War-era tale of a boy and his giant robot buddy. When a gargantuan metal man crashes into the waters off the coast of Maine, the army is called in to investigate. While they hunt for what they fear could be a Russian threat, young Hogarth befriends the iron giant and teaches him the inspiring lesson, “You are who you choose to be.” Brad Bird directs; Vin Diesel (once again) co-stars.

Sacha Baron Cohen applies his irreverent brand of humor to the tale of a notorious war criminal who is lost and friendless on the streets of New York City. Larry Charles directs; Anna Faris and Jason Mantzoukas co-star. In the Loop (2009) As packed with inventive curses as it is incredible cast members, this scintillating satire tackles U.K.-U.S. relations with a take-no-prisoners attitude. Here the business of doing war is about a lot of little people playing a dangerous game. Armando Iannucci directs; James Gandolfini, Peter Capaldi, Steve Coogan and Anna Chlumsky co-star.

Four Lions (2010) Like The Dictator, this fearless comedy takes on the touchy subject terrorism and actually allows us to laugh at it. Here a motley group of young Islamic Brits pursue their ambition to pull off a world-rattling jihad. It’s a remarkably funny and insightful look at true believers and the social systems that create them. Christopher Morris directs; Riz Ahmed, Kayvan Novak and Adeel Akhtar co-star.

The Infidel (2010) In yet another British offering, a semi-devoted Muslim’s world is turned upside down when he discovers he was adopted…from a Jewish family. Cultures clash in this identity-crisis comedy with hilarious and iconoclastic results. Josh Appignanesi directs; Omid Djalili and Richard Schiff co-star. 2 Days in Paris (2007) Julie Delpy wrote, directed and stars in this quirky comedy that follows a French woman and her uptight American boyfriend through two tumultuous days visiting her family in Paris. Culture shock, run-ins with her many ex-lovers and uncomfortable encounters with her belligerent parents lead him to question if their love is meant to be. Adam Goldberg and Delpy’s father, Albert co-star.

A Life Less Ordinary (1997) Though a less-heralded effort from Danny Boyle,this kinetic romantic comedy is lively, offbeat and wildly fun. Ewan McGregor and Cameron Diaz star as an unlikely Bonnie and Clyde. He’s a recently fired janitor with romantic ambitions; she’s a spoiled rich girl with a drive to punish her dead-hearted dad (Ian Holm). But when their paths cross, they discover a chance to become something even greater than either has ever dreamed. Holly Hunter, Delroy Lindo co-star as matching making angels with dangerous methods.

Sliding Doors (1998) Gwyneth Paltrow pulls double-duty in this romantic comedy that explores the path not taken as she plays a young Brit whose life is divided when a fateful subway ride leads her down two different routes. In one, she discovers her cheating boyfriend in flagrante, dumps him and promptly sets out on a path of self-discovery. In the other, she remains clueless of his infidelity and soldiers on seeking bliss in their flawed love. John Hannah and John Lynch co-star. The People vs. George Lucas (2009) For most Star Wars fans, the prequel trilogy is almost sacrilegious, an affront to their beloved fandom perpetrated by the very man who created it: George Lucas. In this documentary the fans finally get the chance to strike back; featuring in-person interviews as well as videos sent in from around the world, the documentary allows the Star Wars fans of old to air their grievances, disappointment, and utter shock at The Phantom Menace as well as their thoughts on the future of their beloved franchise/brand/what have you. But while you assume it’ll just be whiny fanboys bitching and moaning the entire time (and to some extent it is, although in a far more eloquent and well-spoken way than I just made it out), The People Vs. George Lucas also looks at the other side of the coin to the people who actually like the prequel trilogy and the fact that, just maybe, the newer Star Wars fans (i.e. the kids) aren’t as upset. Hell, to them, it may even be the superior trilogy! For those of you who want to vicariously chew Lucas out, this is definitely your documentary. But be warned, listening to the defenses of the prequel trilogy and Lucas’ vision, you may find yourself agreeing with it far more than you thought you would.