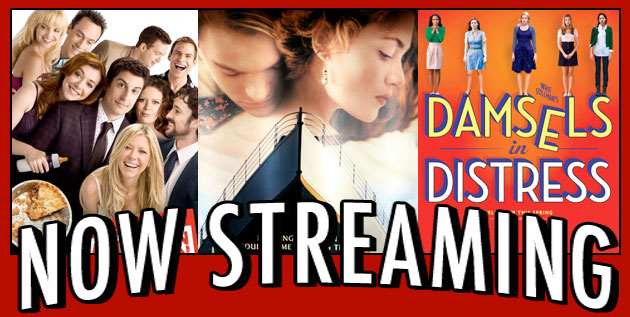 Each week within this column we strive to pair the latest in theatrical releases to worthwhile titles currently available on Netflix Instant Watch. This week we offer alternatives to American Reunion, Titanic and Damsels in Distress. Loser (2000) American alumi Jason Biggs and Mena Suvari go to college in Amy Heckerling’s spirited remake of The Apartment. He’s a dork from the Midwest and she’s an edgy girl with a troubling taste for older men. How can such losers make a love connection? Jimmi Simpson and Greg Kinnear co-star.

Boys and Girls (2000) Jason Biggs plays the cool kid in this college-set rom-com. (He’s even got those regrettable bleached tips in his hair!) Freddie Prinze Jr. and Claire Forlani star, while American’s Alyson Hannigan co-stars.

The Rules of Attraction (2002) James Van Der Beek stars in this wily sex comedy based on the Bret Easton Ellis novel. At a liberal arts college a batch of coeds try to make sense of love and sex, but mostly sex. Shannyn Sossamon, Jessica Biel, Jay Baruchel and American’s Thomas Ian Nicholas co-star.

James Cameron set his iconic romance tale against the tragic sinking of the Titanic. Now in 3D, the danger has a whole new dimension. Leonardo DiCaprio and Kate Winslet star. Eternal Sunshine of the Spotless Mind (2004) In this tale of star-crossed lovers Winslet plays a young woman with a temper, a penchant for dying her hair with Manic Panic, and a boyfriend she wishes she could forget. So when a new company offers to damage her brain and delete any trace of him, so begins an adventure where these two lovers dare to forget then struggle to reconnect in a bittersweet dance that goes on an on. Jim Carrey co-stars; Michel Gondry directs.

Sense and Sensibility (1995) In this Oscar-winning adaptation of Jane Austen‘s classic novel, Winslet portays the impulsive Marianne Dashwood, a young woman who dreams of romance but never its consequences. Emma Thompson, who wrote the screenplay, co-stars as her older and wiser sister, Elinor, whose restraint leads to a slow burn love affair of her own. Ang Lee directs.

Quills (2000) For something steamier with a dangerously dark streak, check out this Academy Award-nominated biopic that has some scandalous fun with the life and works of the world’s most notorious libertine, the Marquis de Sade. Geoffrey Rush stars as the randy aristocrat with a passion of S&M erotica, while Winslet plays a chambermaid who falls under his seductive sway. Joaquin Phoenix and Michael Caine co-star; Philip Kaufman directs.

In Whit Stilman’s long-anticipated return to theaters, Greta Gerwig stars as a chipper but bossy alpha female who aims to bring a feminine touch to the brutish college life of Seven Oaks with the help of her gal pals, tap dancing and superb hygiene. Adam Brody co-stars. 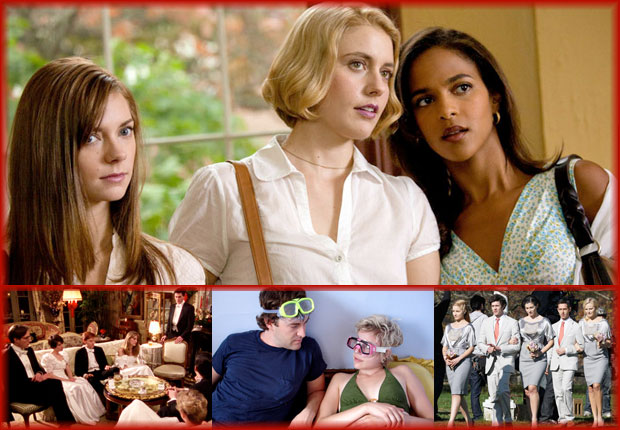 For more from the DiD crew:

Metropolitan (1990) Whit Stillman’s Spirit Award-winning, Oscar-nominated writer-directorial debut centers on the social season of a clutch of upper class Manhattanite that’s thrown into a thrilling frenzy thanks to a new addition to their highly selective scene.

Hannah Takes the Stairs (2007) Mumblecore ingénue Greta Gerwig first made waves with this offbeat dramedy from writer-director Joe Swanberg. Here she plays an enchanting college grad who is stumbling into adulthood with a new job and a pair of dueling office flirtations. Mark Duplass co-stars.

The Romantics (2010) Adam Brody co-stars in this ensemble drama that follows a batch of friends who’ve so often swapped partners that they’ve earned the snide title the Romantics. On the weekend that two of the group are set to marry, old rivalries and still-burning flames ignite, leading to some hard to swallow confessions. Katie Holmes, Malin Akerman, Anna Paquin, Diana Argon, Jeremy Strong, Elijiah Wood, and Josh Duhamel co-star. How to Steal a Million (1966) Looking for something fun and fashionable? Then check out this lesser-known comedy caper that pairs the always-lovely Audrey Hepburn with the devastatingly debonair Peter O’Toole. Here Hepburn plays the devoted daughter to an ardent art appreciator who channels his passion into creating incredible forgeries. He’s been selling these fakes for years, much to the chagrin of his child. But when his vanity leads him to loan one of his fakes to a local museum, she must steal it before its falseness can be discovered and her father ruined forever. So, she asks the help of the cat burglar (O’Toole) she caught prowling her home. Together they hope to snatch the statue back before it’s too late. Nothing is what it seems in this wacky comedy from William Wyler, and Hepburn and O’Toole are absolutely enchanting. Full of cheeky banter, whimsy, and blush-inducing flirtations, this rom-com is the perfect pick for a date night or girls’ night.