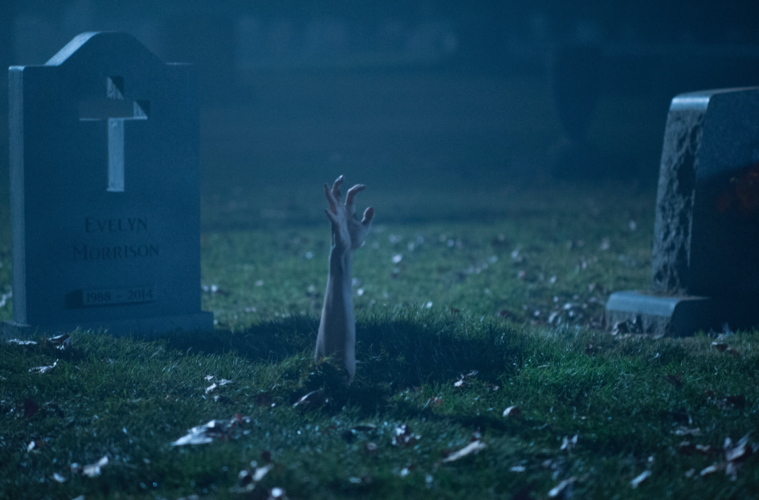 Even when accounting for Masters of Horror, the Showtime anthology series he helped steer, it’s been a good long while since any new Joe Dante project graced screens. There was The Hole, but that got dumped into the smallest of releases a few years back (also an entire three years after its premiere), and, discounting an installment in the anthology project Trapped Ashes, there was Looney Tunes: Back in Action from… 2003. In short: it’s been too long, and the length of time adds some additional anticipation to his latest feature, Burying the Ex, which received mixed notices upon premiering at Venice last summer. The consensus, for good and ill, is that if you’re particularly attuned to Dante’s sense of humor, you’ll find something to gnaw on here. If not? This might be one to sit out altogether.

It’s perhaps a bit telling that the latest preview, much like that which came before it, sells a movie more digestible than what we’d expect from the off-kilter director — a “safe” dark comedy, that is. I’m hoping it elevates above that most-dreaded sort of approach, and thus some early reviews’ claim that the film can get quite mean — I think there are hints of that in the marketing materials — is encouraging. Who knows when Dante will make a follow-up to Burying the Ex? If it’s another long wait, there’s some pressure for this offering to make a worthy addition to his odd, fascinating oeuvre.

It seemed like a great idea when Max, an all-around nice guy (Anton Yelchin), and Evelyn, his beautiful girlfriend (Ashley Greene), moved in together. When Evelyn turns out to be a controlling, manipulative nightmare, Max knows it’s time to call it quits, but there’s just one problem: he’s terrified of breaking up with her. Fate steps in when Evelyn is involved in a freak accident and dies, leaving Max single and ready to mingle. Just as Max is thinking about moving on with what could be his dream girl, Olivia (Alexandra Daddario) – Evelyn has returned from the grave and is determined to get her boyfriend back…even if that means transforming him into one of the undead.

Burying the Ex will hit theaters and iTunes on June 19.