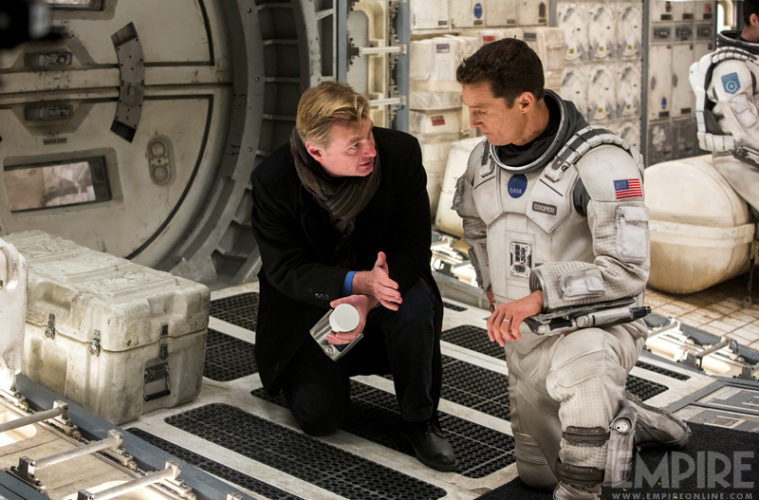 If the debut of five new posters for Interstellar wasn’t an indication that Paramount is kicking up the marketing for Christopher Nolan‘s latest, then the next few weeks should certainly convince you. A new trailer (running 2 minutes and 17 seconds) is set to debut with Gone Girl, but before that we have a batch of new images courtesy of Empire. Showing off much of our cast on Earth and in space, we also get a peek behind-the-scenes, both of our director at work and a peek at what looks to be a spaceship in a soundstage.

“This is one of the biggest films anyone’s ever been a part of,” star Matthew McConaughey tells the magazine, while Anne Hathaway adds, “I am so excited for the world to receive this film, because there’s going to be a new conversation I believe will happen because of it. It’s not a dry, science-based film. It has a pulse. It’s got blood in its veins.”

Nolan adds to the conversation (via CS), saying, “It’s a very classically constructed movie, but the freshness of the narrative elements really enhance it. I liken it to the blockbusters I grew up with as a kid, family films in the best sense: edgy, incisive, challenging.” Lastly, he says, “It’s almost a mirror image of Inception. It expands out in the way Inception contracts inwards.”

As we gear up for a release in about six weeks, check out the images above and below. Update: See more images below via the magazine for the 169-minute film: