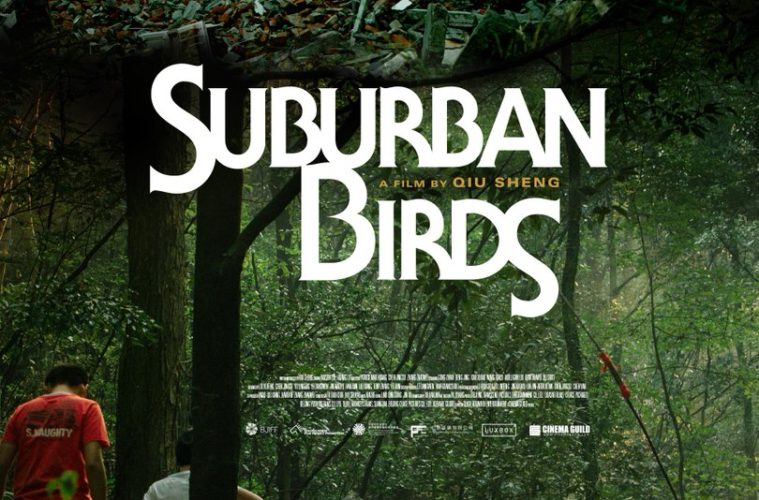 Something is causing the ground to shift underneath a new Chinese suburb in writer-director Qiu Sheng’s intriguing, adept debut feature. High-rise towers are listing to the side, and residents are being evacuated. As Suburban Birds begins, a team of engineers is on-site to investigate the cause—ideally quickly, without disrupting the planned subway tunneling, so that this little part of China’s development boom can proceed. Make way for tomorrow! It’s left to Qiu to survey the restless earth around the foundations of the future, via a subtle structural gambit that marks his voice as one worth listening to.

As the four-man crew take measurements, knock off early, and indulge in the occasional after-work binge-drinking, low man on the totem pole Xiahao’s (Mason Lee) lack of motivation and affect in comparison to his workmates marks him out as the protagonist according to the dictates of arthouse logic. Wandering through a schoolroom, he finds the diary of a student there, also named Xiahao (played by Gong Xiahoa), which becomes a hinge into an extended childhood reverie taking up the central panel of the film’s triptych narrative. This section is shot with flexible, sometimes handheld camerawork, in contrast to the mechanized swivels and zooms of the first and third parts (which seem to take inspiration surveyor’s tripod-mounted instruments).

Is it a flashback to Xiahao’s own childhood, spent sitting through lessons about the coming subway, marching through the woods to disrupt a bird’s nest with his friends, playing airsoft war games in the rubble of a city perpetually under construction? No, because the two strands of narrative seem to touch at places. Is it simultaneous? No, because the same locations seem to be occupied by different characters. The storylines are parallel, in some passing details and in some architectural elements—both feature an amateur haircut and an imagined dragon, a tentative love triangle and a water leak—but they also touch, as objects bleed through from one to another, like a set of binoculars through which the characters view distant, forbiddingly vast new construction, and each other’s faces. The recurrent visual motif of the world viewed through a viewfinder, and the attendant distortion of space, becomes a metaphor for the tricks perspective plays with time, like in Aimee Mann and Elvis Costello’s “The Other End (of the Telescope)”.

Trimmed five minutes since its appearance at Locarno, Suburban Birds remains somewhat languorous and low-key. Qiu’s frame is rarely without a point of pleasurable or telling visual interest, or his scenes without an undercurrent of deferred tension—the park with plaster-looking statues of a disorienting assortment of animals in action poses, for instance, through which preadolescent Xiahao walks on a silent date foretelling the adult Xiahao’s tense, atomized social life. Still, viewers shouldn’t approach this ambiguously bifurcated narrative expecting the visual ambition or narrative invention of Bi Gan and Apichatpong Weerasethakul. Suburban Birds is more studious—even if Qiu is a student with real promise. The major incident of the childhood section is a journey to a place that may not exist, led by a guide who may or may not know the way, with characters falling away from the journey one by one like the supporting cast of a survival thriller—or the supporting cast of your own childhood—as they walk through a geography at once familiar, misremembered and changed. This is Qiu’s harmony of metaphorical form and naturalistic content, and the note he hits is rich and tantalizingly unresolved.