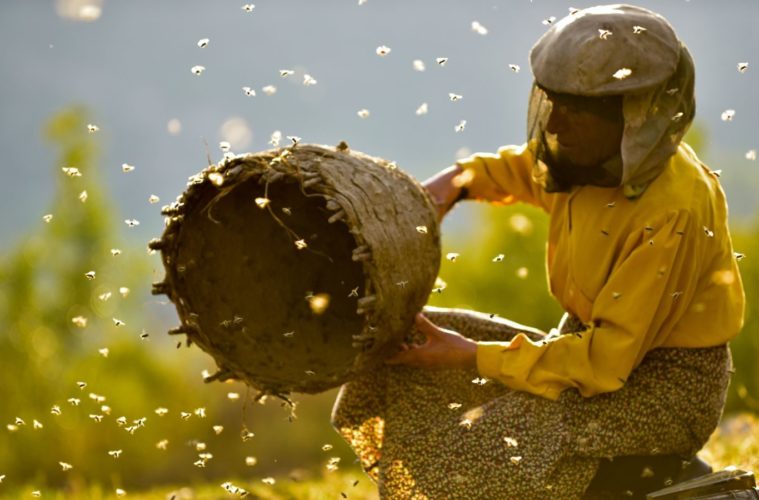 ND/NF Review: ‘Honeyland’ is a Vérité Documentary of an Idyllic Existence Upturned

The issue of matching approach to subject is always a central concern in documentary filmmaking, even moreso than narrative films. Due to the truth claims involved in the vast majority of documentaries, fidelity is of paramount importance, and filmmakers must find the best way of representing the many intricacies and aspects that make up the person or topic at their movies’ core.

This need for fidelity characterizes Honeyland, a documentary co-directed by Ljubomir Stefanov and Tamara Kotevska (in their feature debut) which premiered at this year’s Sundance Film Festival and won the festival’s documentary World Cinema Grand Jury prize. For more or less the entirety of the film, its focus rests upon Hatidze, a Macedonian woman in her fifties who lives with her ailing mother in a deserted mountain village and makes both her living and passion out of harvesting honey. The various synopses describe her as the last traditional female beekeeper in Europe, but this is never laid out in text or voiceover, as the images and moments are presented without any overt intervention by the documentarians.

Hatidze’s idyllic existence is upturned by the arrival of a family, consisting of a demanding father, an indignant mother, seven children of varying levels of rowdiness, and an entire herd of cattle and clanking vehicles–Hatidze, it should be noted, travels into town by foot and by train in order to sell her honey. The two groups begin in cautious amity, as the beekeeper befriends the children and offers advice to the family’s attempts to mass-produce honey, complete with boxes of honeycombs rather than the literal hole in the wall that Hatidze prefers. But as might be expected, greed and ignorance soon dominate, and overexertion and subsequent starvation of both bee colonies causes an irreparable rift.

It is entirely to Stefanov and Kotevska’s credit that Honeyland rarely comes across as a simple “individual tradition vs. societal modernism” narrative, even if the outlines show themselves on occasion. Throughout, the emphasis is on base commonalities and the differences that arise organically, continually situating all of the people among the dirt and rocks of their shared environment. Due to the vérité-inflected nature of the observational viewpoint, many surprising moments are well-integrated into the fabric of the film: the on-camera birth of a calf, a particularly physical tussle between two children over a toy, the innumerable bee-stings suffered by the family–but not Hatidze–and so on; there are even a few moments that could be called sight gags, with Hatidze’s face peeking up from her wall in the background as she observes the tumult of her new neighbors.

Yet through it all, both Hatidze and her mother have an almost reverential visage; their living situation in a dark house sometimes resembles Pedro Costa in terms of surrounding their faces with darkness, partially illuminated by candlelight. The opening, mirrored in the closing, features Hatidze hiking along a perilous mountain path to collect bees, and if the rest of Honeyland never quite achieves that level of evocation, it remains dedicated to its subject through thick and thin.

Honeyland played at New Directors/New Films 2019 and opens on July 26.