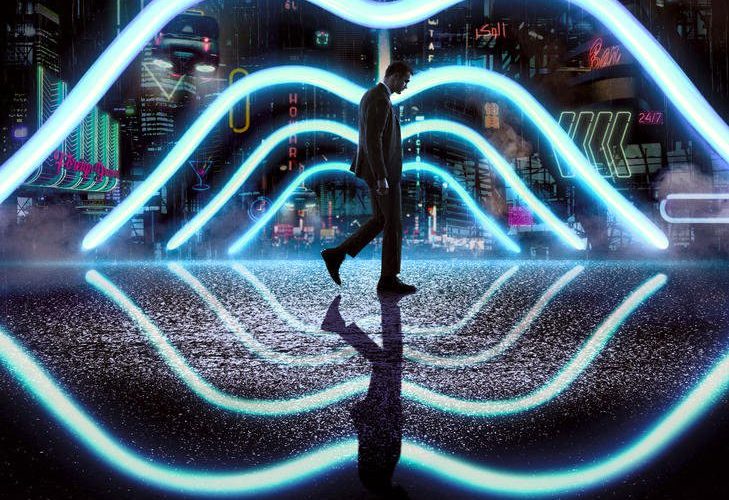 Review: ‘Mute’ is a Slight Detective Story in Search of a Purpose

Setting a film in the future and casting as its protagonist a man with a disability is a quick way to propose a deeper thematic meaning in a narrative. Layering a lifestyle choice on top of that disability, further alienating your main character from the world around him, would only further serve that impression. Any film set in the future is assumed to be saying something about our present through the world it represents, and a disabled character is almost always a way to tell us something about ourselves. Anyone expecting such seemingly inevitable thought-provoking angles from Mute, however, should be warned—no such depths are attempted in this slight, circuitous film.

Mute is one of those strange oddities in which every single aspect of the plot feels purposefully cultivated for some grand thematic or existential purpose, yet none of it coheres into something that feels particularly meaningful or revelatory. Taking place in Berlin, set in the not-so-distant future, this is the story of Leo (Alexander Skarsgård), a bartender who lost the ability to speak at a young age because of a boating accident. He has a girlfriend, Naadirah (Seyneb Saleh), who works as a waitress in the same nightclub, and their life together is just as cute as one would expect. She is the beautiful, slightly mysterious imp flirting with danger, and he is her gentle giant protector.

Anyone who has ever seen a film noir before can probably guess where this is going. The moment that we see that Leo is carving her a bed out of solid wood and learn that Naadirah is trying to score money for some unknown purpose, tragedy can be heard wailing in the distance like a siren in the cold Berlin night. Right on time, Naadirah disappears and suddenly Leo must shake off his Amish aversion to technology (yes, Leo is actually Amish, in addition to being mute) and go find her.

It’s not the setup so much as the twists and turns that take us to the conclusion that matters, and that is one of the most glaring problems with Mute. The concept of hobbling your gumshoe in some way is a novel one, and making him mute is not a bad first idea, but it does cause some problems. Leo has a notepad with which to write basic questions or names, but in general he is more like a wall that other people simply careen off of wildly. A classic noir detective will always let the suspect or the witness talk more than them, hoping for some slip of the tongue or to exploit their assumptions, but because Leo literally never says a word during the course of his investigation, most of what he learns comes in the form of ecstatic ramblings from confused and misguided sources, or via pointed, weirdly specific insults. It certainly moves the plot along, but it doesn’t do much to make us think that he is a man of great skill or ability overcoming a handicap.

The fact that Leo is Amish is another curious addition to the character, especially given his lack of a voice. It is hard to tell if his Amish background was used as a way to avoid the easy question of why he doesn’t simply use the abundant technology around him to speak, or if it was meant to make some larger thematic statement about how technology has led to dehumanization. Could he talk, Leo might be able to explain his adherence to the faith, but since he can’t, all we have to go on are his silent, vacant stares. Skarsgård is a fine physical presence in the film, but either through performance or direction, all he is able to put across in his role as Leo is stolid confusion.

Luckily for the audience—but unluckily for the tone and pacing of the film—there are two other characters who are also having their own adventure in Berlin, with only a glancing connection to Leo at the outset. Cactus Bill (Paul Rudd) is a gloriously mustachioed surgeon, a United States soldier who has gone AWOL in Berlin rather than be re-deployed back into the Middle East. His partner in crime—both literal and figurative—is Duck (Justin Theroux), a thatch-headed flirt who had previously served with Cactus but left the military on good terms. Duck has an honest business involving cybernetic implants and prosthetics, and Cactus is a mob doctor fixing up busted enforcers while he waits for new papers for him and his daughter.

The purpose of following these two is murky at first, but as in any good detective story, the threads of the disparate narratives get drawn together tighter as the story goes on. Cactus’s quick temper and Duck’s weird erotic energy make them compelling to watch, but they also throw the tone wildly out of whack almost every time we see them on screen. This is especially true in a scene where Cactus confronts Duck regarding a dark secret, then receives some news, then announces a joyful trip to the mall. There’s being ambiguous, then there’s being ambivalent, and then there is just being plain inconsistent, and too often these two weirdos, delightfully and perversely charismatic though they are, land in the latter camp.

Director and co-writer Duncan Jones has been talking about making this movie since he completed his first film, Moon. Whereas Moon had a similar high-concept plot, it also had a narrow focus and a brutal economy of storytelling. Much of the stylistic and world-building flourishes that were present and exciting in his debut remain here, but they are buried underneath a swell of unnecessary plotting. For as far as Jones has come since Moon, both in terms of time and experience, Mute still feels like the half-baked sophomore project it was intended to be: bigger, flashier, but not better, and in many ways suffering for its ambition. Jones must have had a deep, personal connection to the story in order to pursue this film for so long after the moment it would have made sense in his career, but what he created holds no obvious clue as to what that connection could be.

While none of this makes Mute a “bad movie” in the sense that it fails as a narrative or collapses under the weight of poor direction or acting, it does mean that there isn’t a great deal to recommend. Rudd and Theroux are a sight to be seen, but the way their story concludes is gross, and perhaps offensive if viewed by the right pair of eyes. The world Jones creates—with its perpetual war, its extrapolation of current technological trends—is interesting but not particularly well investigated by the story. Even the novelty of watching a mute Amish shamus trying to find a lost girl in a technologically focused future is undermined by his liberal attitude toward his own faith and culture and by how readily people talk to him.

So what is the point, then? Of creating this future, or making this character, of following Duck and Cactus, of telling this story? After watching Mute, odds are that you still won’t know.

Mute is now streaming on Netflix.