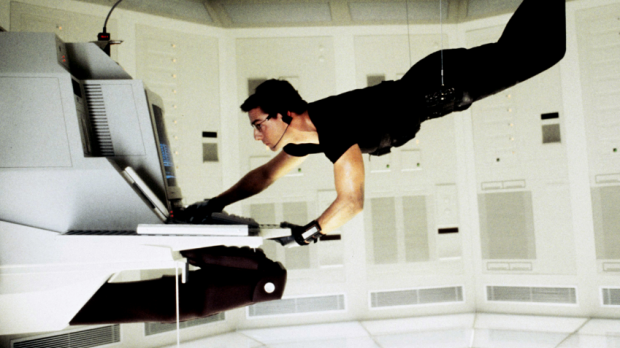 In a time before summer blockbuster slates were jam-packed with cinematic universes, two-part franchise finales, and reboot culture, Hollywood took some time in the mid-90s and new millennium to cultivate a different, fertile source of non-inspiration: old television. There, the Bradys, Thunderbirds, and Angels abound. It was an awkward period, no doubt, but Brian De Palma’s take on the the ’60s spy hit remains the crown jewel of that era with little-to-no competition. The schlock jock turned full-tilt commercial blockbuster, and the result was (and still is) his largest pairing of financial and critical success. His not-so-secret weapon: the then-prince of movie stardom, Tom Cruise.

After spending the ’80s and early ’90s navigating a skyrocket to near-untouchable success, Cruise, the surefire mega-hit with a crooked smile, was aiming to take more creative control over his projects. Despite making calculated choices to work closely with other great auteurs, Mission: Impossible was his first spin as producer, embedding him directly in the kind of commanding position he had been angling for. Until then, he only had two previous stints in any kind of creative capacity, with a story credit on 1990’s Days of Thunder and a director credit on an episode of Showtime’s 1993 neo-noir series Fallen Angels, the latter of which has a certain amount of De Palma-ism to it. The relationship began as less-than-amiable, with Cruise swapping De Palma screenwriting veteran and friend David Koepp with his own screenwriting veteran and friend, Robert Towne. While there are director trademarks aplenty, Mission: Impossible is also undoubtedly a Tom Cruise joint — but DePalma manipulates this to maximum effect, taking another page from his more Hitchcockian tastes.

De Palma’s proclivities for aping Hitchcock are peppered throughout his oeuvre to varying degrees of success, depending on who you ask. Those with a personal penchant for the British auteur may frequently take DePalma’s nods with whole servings of salt, but when he tips his hat and it lands, it lands with sledgehammer subtlety in the best ways possible. The director throws all of the gloss and a bit of the grotesque on display in this Hitchcock quotation. If Obsession, Dressed to Kill, and Body Double are Vertigo, Psycho, and Rear Window, respectively, then Mission: Impossible owes as much to the Cold War-era espionage of North by Northwest as it does its television namesake. Both films even end with a train in a tunnel, although one less Freudian than the other — make of that what you will. With a few key set pieces, Hitchcock turned charming kook Cary Grant into what is ostensibly the first superspy, and De Palma follows suit with Cruise. North by Northwest takes Grant from a whimsical drunken car chase worthy of Buster Keaton (the kind of goofiness typically attributed to him) to full-blown machismo clinging to a founding father’s forehead. For Cruise, despite having dipped his toe into the action blockbuster a handful of times, dangling from high-wires and hugging bullet trains was new territory to be sure.

The gum-chewing, devil-may-care cowboy in the film’s first act more closely resembles Pete “Maverick” Mitchell than he does the Ethan Hunt of last year’s Rogue Nation. He’s a full-on representation of Cruise’s cocksure nature up to that point. But lo and behold, red light, green light — he ditches the gum for an explosion, and De Palma’s smoldering crucible culminates in the explosive birth of Tom Cruise: Action Figure* (*explosive chewing gum sold separately). De Palma seems to relish every opportunity to make Cruise earn the newfound action-star stripes he seems to desire so feverishly. The helmer blows up a giant fish tank (in the best threat-by-fish-tank since Danny DeVito in Wise Guys), uses him as a human marionette, and finishes it all off by literally threatening to slit his throat with a helicopter in the Chunnel. All as if to say, “You want this, Tom? I will turn you into an action star if it fucking kills you” while not seeming to care if it does. Cary Grant got Eva Marie Saint. Tom Cruise got Ving Rhames, The Cranberries, and a helicopter in the face.

Cruise’s turn aside, De Palma takes giddy delight in subverting almost every other aspect of this film’s casting. In ‘96, fans of the show (and original star Peter Graves) lamented Jim Phelps’ turn as villain, but, upon looking back, the move feels delightfully brazen: a healthy dose of reverence to the show with a playful and refreshing middle finger. Take that in equal measure with the plucky introduction of Emilio Estevez’s tech guru Jack Harmon. He and Cruise trade pithy back-slapping remarks, and, for a few scenes, we think we’re being treated to an Outsiders reunion we never knew we even wanted, only for the proverbial rug to be pulled when De Palma makes quick work of Estevez in what is arguably cinema’s most mechanically menacing elevator shaft. Ving Rhames is brought into the picture practically ripped (suit, glasses, and all) from Pulp Fiction. Instead of Marsellus Wallace, we get a boyish computer geek. The same goes for Jean Reno (vacationing from Leon) slinking around as a smarmy heavy rather than a gentle killer. The two are on loan to De Palma from 1994, and he knows exactly what to do with those expectations.

His instincts are out in full force, but not without mediation. He packs just about as much Brian De Palma gore as a PG-13 rating will allow, and it proves potent rather than garish. How about that bloody Jon Voight fever dream? One is hard-pressed to find something so strange and arresting in a contemporary summer actioner, let alone one from 1996. The scene is welcome, if a bit out-of-place, and that’s why De Palma’s conflicting relationship with Cruise is paramount to the film’s resilience 20 years later. Cruise’s steadfast grip over his own image keeps Mission: Impossible within the pleasurable confines of what put people in the theatre. He made us comfortable back then, and it was De Palma’s job to betray that comfort in favor of his own eccentricities. (Split diopters! Over-lighting! Dutch angles!) The result isn’t merely a tightly wrought bit of popcorn action; it became a mantra of sorts, a recipe for the franchise endurance that rubbed off on Cruise as he cultivated the brand. De Palma did De Palma, which allowed others to do themselves, and so forth. In a blockbuster landscape bereft of signature filmmaking, it’s heartening to know that — whether Woo, Abrams, Bird, McQuarrie, or anyone else — there’s always an Ethan Hunt action figure waiting in the sandbox, courtesy of one Brian De Palma.