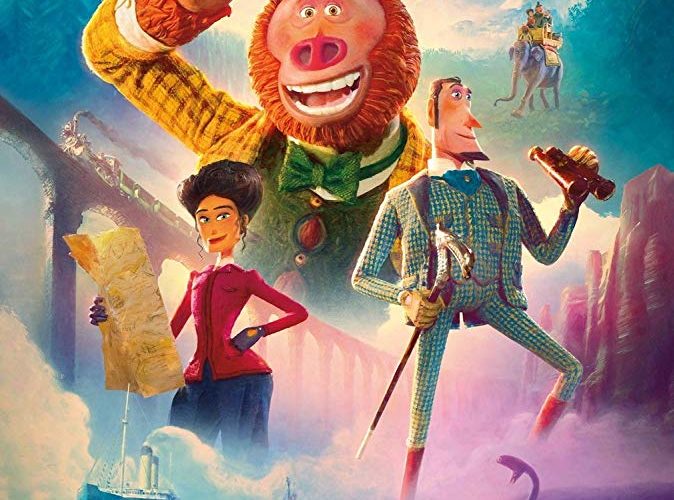 The years between Laika releases–in which our eyes are exposed to hours of unimaginative, cookie-cutter Hollywood animation–always seems to be just enough time to desperately crave a new visually inventive world from the studio. Missing Link, the fifth feature film from the company, is another wondrously detailed animation feat and certainly their most epic outing with its globe-trotting story of mythic proportions–even as the script leaves something to be desired.

Written and directed by Chris Butler (ParaNorman), the journey of an unlikely duo linked together by a shared loneliness is a well-worn tale–one that can seem even more difficult in both keeping the attention of a younger demographic and retaining a level of originality–but where Missing Link lacks narrative flair, it makes up for it in spades with its ravishing world-building.

Set in the Victorian era, the movie follows Sir Lionel Frost (Hugh Jackman), an adventurer going to the deepest reaches of the globe to prove myths a reality and bring back photographic proof. After tracking down a Loch Ness monster-sequel creature, a mysterious letter puts him on the path to a Sasquatch in Laika’s stomping grounds of America’s Pacific Northwest. With a setup not unlike James Gray’s The Lost City of Z, a high society of fellow adventurers are dismayed at Frost’s desires to upturn the very fabric of everyday thinking.

Frost aims to prove a connection to man’s ancestry (aka “the missing link”) but those in power talk down to him, exclaiming that they “descended from great men, not great apes.” Undeterred from being excluded from the esteemed boys’ club, Frost soon embarks on this Sasquatch-seeking adventure and what he discovers is not a monstrous creature, but the lovably aloof Mr. Link/Susan (Zach Galifianakis), a lonely, talkative figure who simply wants to be reunited with his ancestors, the Yetis of the Shangri-La.

What ensues is a mix of goofy buddy comedy and exquisitely detailed David Lean-esque adventure hijinks, in which the slapstick fun runs a bit thin. Lacking the social skills that go with being an endangered species, Link perceives every word to be literal, which enjoyably make up about half of the jokes as he repeatedly misinterprets Jackman’s Frost. With Link’s galumphing demeanor, the other half of the humor is derived from various forms of pratfalls, most of which eventually wear out their welcome. One exception, a sequence showing the worst heist ever, does at least offer a few laughs.

Despite these characters never seeming fully-formed, one does have to give some credit to Butler and company for crafting an atypical lead for a family film; a self-centered asshole that only cares about himself. Frost is headstrong in his quests, only barely acknowledging the loneliness that comes with such a path in life. And as Frost and Link jump around the world, there’s an underlying shared pain that Laika would’ve done well to explore further.

Where the studio excels, once again, is the exotic, vibrant worlds they’ve hand-crafted. Their most colorful film yet, we galavant from the bustling streets of London to the idyllic woods of the Pacific Northwest to perilous high seas to the green jungles of India to the icy treacherous terrain of the Himalayas, never staying in one place for too long, Butler crafts a number of gripping set pieces, most notably an Inception meets The Perfect Storm riff, and a cliff-hanging high-wire act that recalls the intensity of last year’s Fallout.

Along the way, the duo also meets up with Adelina Fortnight (Zoe Saldana), a widower of a distinguished adventurer who unlocks the key to their adventure. A fiercely independent woman, she’s a twist on the usual female love interest and welcome in these impressionable animations.

As with most Laika features, there’s a noble theme at the center, this time being a plea to leave a part of the world unspoiled and carve a new path to knock down the conventional, stodgy old ways of thinking. These ideas, conveyed as cleanly as the pristine animation, serve as a refreshing backbone despite not being explored with a significant amount of depth. Laika’s craft makes the sweet-natured, grand adventure worth going on, but the accompanying dialogue from those leading the journey is ultimately too simple-minded to make a memorable mark.