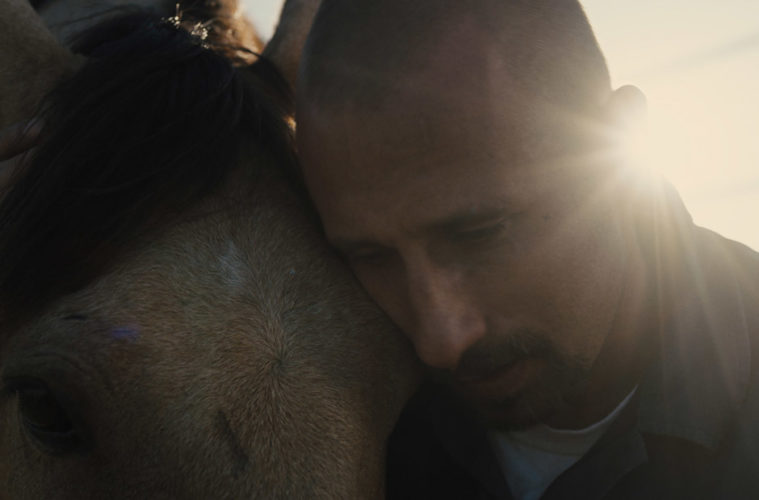 Matthias Schoenaerts and Laure de Clermont-Tonnerre on ‘The Mustang,’ the Freedom of Chaos, and Prison Reform

Tucked in the back corner booth of a nice restaurant up in the mountains of Park City, Matthias Schoenaerts and Laure de Clermont-Tonnerre recount their days in Nevada filming The Mustang, a top-notch prison drama premiering at Sundance and due to hit theaters in March. Words like “chaotic” are tossed around, but the duo qualifies the chaos. What can you expect when your co-lead is horse? The Film Stage sat down with the two to talk through it all.

The Film Stage: In preparing for this interview, one of my main takeaways from the film was that even though it’s such intense subject matter being dealt with, the movie is so calm. The pace of it and the style of the trust that comes through; the two of you working together. And of course the lead performance. How do you get to that place? Where it’s so calm and confident?

Laure de Clermont-Tonnerre: It’s funny because I would say that the shooting was not calm at all.

Matthias Schoenaerts: I think we were looking for an antidote! The shoot was crazy.

Clermont-Tonnerre: The shoot was crazy and actually the energy and intention came from [being] so compressed by the short [filming] schedule. [Matthias and I] were talking a lot together and we were doing research together. I think it allowed us to liberate our instincts. We were on the run all the time. And it felt that it was the right tension and energy for this film. How do you feel it was calm, in the pacing?

Yes, and it is a positive note. You have these other subplots in the film but the majority of the story is Roman and the horse. And that felt very focused, very lived-in. I think that will often happen where it is a crazy shoot but it won’t come across in the final product.

Schoenaerts: I think that’s because you [Clermont-Tonnerre] have been working on it for five years. My take on the material probably is that it’s so anchored in your being that you’re not thrown off by a hectic shoot or whatever. And also the cadence of that life in prison, it’s pretty… there’s a heartbeat to it. It’s very repetitive and it’s very monotonous and it’s also slow. That’s my perception. You’re the director. You explain it! [Laughs.]

Clermont-Tonnerre: I think the triangle between the DP Ruben [Impens], Matthias, and I worked so well, in fact. We knew it was a very tight point of view on Roman that we wanted to follow on this trajectory and this man from this prison to this connection yielding trust and respect with that horse. That was our focus and we knew we had our tracks to make sure the story was told in a specific, precise way. Even though it was chaotic, I liked this chaos. To be honest, I really liked it. In some respects, it was hell but–

Schoenaerts: Sometimes it was hectic but every time we would say like, “Yo, let’s not blow this out of proportion.” It’s not Apocalypse Now, when we talk about going crazy. Sometimes it was nuts but then we would look at each other and say, “Hey, we’re still good.”

How long was the shooting schedule?

Wow, that is quick.

Schoenaerts: Especially with all of the horses.

Working with horses, how was that? That’s a whole thing and I was so impressed by what you were able to get on screen.

Schoenaerts: It’s intense but then I think we definitely owe credit to one man who is like a legend in the field. His name is Rex Peterson. Without that guy we would have never… that guy is a legend. The stuff he made happen with the horses, the magic, it’s unbelievable. Without that guy, we’d still be shooting! [Laughs.]

Clermont-Tonnerre: The thing is it’s always choreographic between the camera, Matthias, the horse, and Rex. Rex has to be there because he has to make sure that the horse responds to direction. So that was rehearsed, but because of the tight schedule obviously Rex really knew how to make this choreography work.

So what about this story engaged you and how did it all happen?

Clermont-Tonnerre: I read an article, by coincidence, in a French paper about five years ago about animal therapy in prison. It was this prison in France and this therapist entrusting small animals to inmates: birds, mouses, chinchillas, rabbits. I thought it was a pretty funny. I said, “What’s going on there? I want to see that.” I was very intrigued. And so I went there, I spent a day, and I was very heartbroken by what I could witness. The presence of those small animals were calming down those men, helping them to open themselves to reconcile with their emotions. To get trust and more confidence. So I wrote Rabbit, my short film that premiered here [at Sundance] four years ago and then I was very obsessed by this subject so I kept searching about it. I found out about this program in Nevada with horses and I said, “That’s a future film.”

Schoenaerts: You always told me you were in love with horses since you were a kid and that you wanted to make a movie about horses but then you were like, “there are so many movies about horses already!” And then you read this article and that article came together with your fascination from the very beginning. Two things coming together.

Clermont-Tonnerre: Completely, two fields that combine together. I always got fascinated as a kid by the sense of punishment, what’s happening in prison, what’s the meaning of punishment. What are men like after prison? What’s this unknown and kind of secret prison life? And I wanted to see the education within incarceration…

Schoenaerts: And also what is very important to know is that very program [depicted in the movie] is the most successful. I mean it has the lowest percentage of recidivism.

Right, you put that statistic at the end of the movie.

Clermont-Tonnerre: Yeah, it really helps them with recidivism. Obviously it’s not one-hundred percent but it’s a lot of men who find a sense of their life and reconcile with their families because they get used to taking care of an animal.

Schoenaerts: Yeah, basically the program is re-humanizing individuals. The prison system is a multi-billion dollar industry, so people are reduced to numbers and statistics and what not. And so I think that’s part of the importance and the relevance of this movie–to portray that universe and that reality.

Clermont-Tonnerre: And also this huge contrast. This country is one of the most incarcerated and you have to keep inmates busy so you have to come up with these programs.

Schoenaerts: But many of these prisons don’t have any programs. We visited four maximum security prisons. We visited San Quentin, which is kind of a model prison in terms of rehabilitation programs and what they do. They have such a wide variety of activities that inmates are allowed to participate in. And then we went to Solano Prison, we went to High Desert State Prison to sit down for five, six hours to have proper interaction, proper conversation.

And I imagine that helps as a performer. Any specifics you took any from those visits?

Clermont-Tonnerre: …and absorb it.

Schoenaerts: Yeah, absorb at a conscious and subconscious level. If there’s something that you see, you know, a lot of facilities they perpetuate a hurt culture… it’s just very vicious and that can be improved. The prison system is a dehumanizing facility. It’s not empowering you to be a better version of yourself–it’s punishing.

And this movie is addressing that. For me, watching this movie was enlightening. I don’t know that I knew about these programs beforehand. Question in regards to the schedule. As a director, when you are under the gun, working with animals, timeframe, creatively are you making hard decisions like, “Okay, let’s scrap this scene” or “shorten this sequence,” “let’s kill this subplot”?

Schoenaerts: Probably we did. But now we forgot about it. In the moment you have to!

Clermont-Tonnerre: We also did improvise some moments and scenes. Scenes like when you’re [to Matthias] inside the pen with the horse, we had to trust each other, like, “Okay, let’s do that!”

Schoenaerts: Yeah, the scene with the horse, where Roman is yelling… when the horse comes to him and makes the first contact. The scene before that is not written. I loved those moment.

Clermont-Tonnerre: There were some moments that we were very precise about and together we knew exactly what we wanted to achieve in terms of emotions and some of them where–because we were prepared–we allowed ourselves to be free and really try different things.The speed of the shoot sometimes liberates instincts. And intuition that is inside but you need this kind of push.

What’s next for both of you?

Clermont-Tonnerre: I just directed a TV show for Hulu. It’s called “The Act,” and it’s actually going to release five days (March 20th) after The Mustang. And my second feature I am writing with my co-writer Mona Fastvold.

Schoenaerts: Well, there’s a couple of things on the table. New things. The one that is already set is Ruin, with Justin Kurzel. Set in like a post-Second World War era. Kind of a revenge story. Together with Margot Robbie. Super good script. Very excited about that one. The Sound of Philadelphia with a French director [Jérémie Guez]. It’s like a family crime drama set in the city of Philadelphia.

The Mustang premiered at the Sundance Film Festival and opens on March 15.