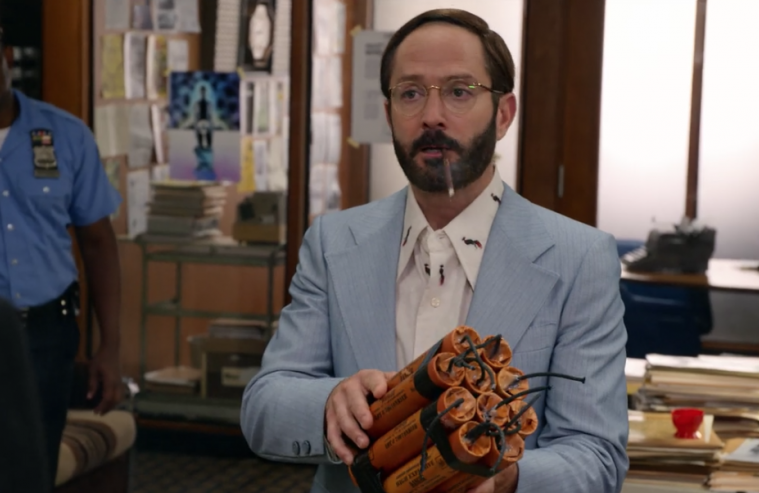 Matt Walsh & Thomas Lennon on the Peculiar State of Comedy, Their 20-Year History, and Auditioning for Clint Eastwood

Neither a pun-based title or hagiography, A Futile and Stupid Gesture follows the caustic rise of National Lampoon from Harvard to newspaper stands to radio, TV, and film. Henry Beard (Domhnall Gleeson) and Douglas Kenney (Will Forte) nurtured a new generation of comedians who found their way to Saturday Night Live, including Michael O’Donoghue (Thomas Lennon), the show’s first head writer. The Lampoon’s shenanigans were bankrolled by Matty Simmons (Matt Walsh), the American entrepreneur behind Weight Watchers.

We spoke Lennon and Walsh during this year’s Sundance Film Festival where the film debuted. The actors talk about competition between their comedy groups (Lennon was in The State and Walsh in the Upright Citizens Brigade), Walsh’s SAG awards speech for Veep and capturing the essence of O’Donoghue and Simmons.

For a majority of the conversation, the pair tackle National Lampoon’s un-P.C. humor and why it’s worth celebrating in 2018.

Matt, congratulations on Veep’s SAG award. Did you make your speech up on the spot?

Matt Walsh: No, that was a whole to-do. They told me that if we won, which of course we didn’t think we were going to, I was going to be the spokesman. So there was a bunch of back and forth between me, Dave Mandel, and Julia, who was at home. Just running it by her and making sure she was good with it too. So there was a lot of nervous energy that went into that. I give myself a B.

Lennon: I’m giving it an A. I’m familiar with your oeuvre and I love it.

Walsh: Nothing new. It was my oeuvre.

Thomas, in the movie you’re clearly doing an impression of Michael O’Donoghue. But Matt, most people wouldn’t know what Matty Simmons looks like, much less what he sounds like. How did you come up with him as a character?

Walsh: I read a tremendous of source material once I knew I was doing it. There’s documentaries and books, so I read all that. But I had a two-hour phone call with him when I had a layover in an airport. I tried to play him as described in the script, as a macher, which is a yiddish term for a mover and a shaker. So after talking to Matty, I think he fancies himself very funny because he wrote jokes for the old comics back in the day. So I tried to play him as the adult in the room but also somebody who felt he was as funny as these young whippersnappers.

When I was watching the movie, I was like oh my god, these National Lampoon jokes would be crucified today.

Lennon: It was interesting because here at Sundance we did a live National Lampoon Radio Hour last night. We were going through all of the scripts and there was a lot of times we’re like, ‘Oh wow, this just won’t play right now, we can’t do this.”

Walsh: Obviously it’s a historical story. So, there was a time when things were like that.

I mean, isn’t the whole thing about National Lampoon is that there was a time where their humor was uncouth, but they did it anyway?

Lennon: I think they were trying to push people’s buttons and almost all the time. I think that’s why I was not really permitted to see it very much because I think the magazine fell in the category of like Playboy. There’s actually a lot of nudity and the humor, especially the O’Donoghue stuff when we were recreating it, like the Vietnamese baby book, that was one of the bleakest scenes. I think some sort of stuff was like just very explicitly to push buttons first and then to be funny later.

Do you think there’s a place for that kind of un-P.C. humor on a mass scale today?

Lennon: You know, I think everything like this tends to fall on a case by case basis. Funny stuff will survive if it’s inherently really funny. And I also think it has a tremendous amount to do with the tone. Some of the 70s stuff in tone feels pretty unenlightened, would be the best way to describe. It feels little unenlightened sometimes. And yet, I feel for the most part, even when they’re doing and saying things we wouldn’t say now, generally the tone is meant to be upbeat and not hateful. But it doesn’t all hold up some and of it does.

Walsh: I feel like the comedy now… my kids make fun of things they’ve never seen. So they’re seeing a parody of Casablanca. So they already assume Casablanca is no good. It’s a weird time for comedy for me. What I see kids watching is like a mini parody or everything is turned into a meme, but they don’t know the source material. It’ll be interesting. When we were little kids, Bugs Bunny would often go meet Peter Lorre for some reason and I never knew what the fuck was going on.

The movie is interesting because it straddles being a narrative comedy but it’s also like, ‘Just put some wigs on an actor and pretend it’s a documentary’. How do you think David Wain weaved these different ways of making the movie?

Lennon: I think the cleverness of Martin Mull playing an older, fictionalized Doug was the secret to cracking the whole movie because with a lot of this stuff you have to be able to step outside of the narrative to explain things. I think brings both a lot of honesty to the movie and also it adds a whole other level of funniness.

Walsh: I think David’s sensibility is always about breaking the fourth wall and breaking things down or commenting on things a little bit. So I think it plays into his strengths as well. Not a great answer.

Lennon: It was a pretty good answer. Let the people judge.

When The State and Upright Citizens Brigade were starting out, did you guys know each other?

Lennon: Yes, and it’s interesting because there were a lot of other sketch groups around the time and the State, certainly, we actively behaved like a gang. I mean we were rough. I mean, in the State, there were punches thrown in group meetings, chairs were smashed. We were really were really high on ourselves. So we loved see other groups come and go and then the Upright Citizens Brigade came by and it was unfortunate that we would all become such good friends because they were so fucking good and we were like, oh man. Generally when you see somebody like that, your first feeling isn’t ‘I’m so happy for them that they’re they’re amazing.’

Walsh: You would be like, who are these guys, they’re not very good. It is very competitive.

Lennon: We had to be friends with you because you were so good.

Walsh: We ended up doing dumb shows together.

Lennon: I’ve known Matt Walsh here since 1996. By the time I met him, I knew David Wain for eight years already. Yeah, we were certainly very curious about the UCB, a little bit envious, a little bit competitive with others. There were groups that you could tell the dedication levels of each member was one million percent. That they were either going to do this or nothing.

By the time you guys were in your respective groups, I think Michael O’Donoghue was ill. Had you followed his career?

Lennon: He had almost passed away when I met Matt. I knew remarkably little about him until the film came up. I was a tiny bit aware of Mr. Mike’s Mondo Video special that he did, I guess I’d seen it one time, but I thought it was kind of scary. He loved to do stuff that was scary and disarming and inappropriate and weird, but I was not super aware of him. I studied them a lot for the movie obviously. I’m trying to do his physicalities and his voice as closely as I can. I learned he suffered from terrible terrible migraines his whole life, which eventually he died of an aneurysm. And I think if you look at his career and you think this guy had a horrible, painful ringing in his head most of the time, it underscores the work in an interesting way. But I also I’ve been told he was an incredibly sweet guy if you knew him. Martin Mull knew him, Lorraine Newman said he was one of the sweetest people to her. I think he also loved to cultivate a persona of being a totally volatile crazy person.

Matt, the scene where Doug pushes Matty through the glass door, did happened in real life? And did you do that stunt?

Walsh: It did happen and I wanted to do the stunt but David said no.

Lennon: It was crazy dangerous. You would have died. But rightfully so they didn’t let you do it because it gave a stunt man a job. I was stressed out because I was standing in front of the door when they did it.

Thomas, what was it like working with Clint Eastwood on The 15:17 to Paris?

Lennon: Oh my God. So I was certainly nervous about it because he has this much larger than life persona. I auditioned for that film like every other actor who’s in it. That’s what everyone does for a Clint Eastwood film. You go into his office with his casting people and there’s a the giant poster on the wall of the barrel of a .45 that says “Go ahead, make my day.” There’s a gun barrel pointed at you while you’re reading for Clint Eastwood. I was certainly very nervous and got to set and we laughed all day long. It was so fun and funny.

Lennon: Yeah. I always bring my guitar to set because there’s so much downtime. So there was a turn around and we were sitting in this office and Clint came in and it was only me and him. And so I was guess I’ll keep playing guitar. And then he bobbed his head for a little bit and then we talked about music for about twenty minutes and his son who’s a bass player in Paris. Then I played him The Smiths’ “The Headmaster Ritual.” I got to play a Smiths’ song for Clint Eastwood and he seemed to really enjoy it, but I never thought I’d spend any part of my life playing The Smiths for Clint Eastwood. He was a pure delight to work with.

A Futile and Stupid Gesture is now on Netflix.