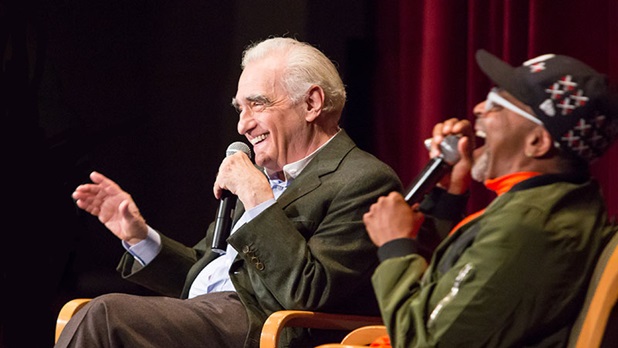 Making their careers on the streets of New York City, it’s only fitting that Martin Scorsese and Spike Lee would take part in an extensive conversation on the making of The Irishman. Taking place at the DGA theater in NYC, it’s a lively, deep dive into the making of the crime epic, which Netflix will debut in theaters this Friday. One can see all the theaters it’s coming to here and read our review from the 57th NYFF premiere here. Along with the full conversation, we’ve highlighted some key selections from the talk, which be seen below.

“He was a major box office star. A great actor and a star, so we got a lot of pictures made that wouldn’t normally be made,” Scorsese said. “But the main thing is that Bob would never take the film away from me, I knew it. Down to the last dead line, I knew it. I don’t know what he could do. I don’t know how he could fight them, but I knew he wouldn’t do it.” On potentially working with other major stars, he added, “I met other actors who I adored, but I never quite felt safe with them.”

Speaking on trying to work with De Niro since Casino, Scorsese also said that he was developing The Winter of Frankie Machine but, “I couldn’t bring it together. I couldn’t get what we do and the demands of the genre [to come together].” However, as De Niro was developing The Good Shepherd around the same time, for strictly research purposes, writer Eric Roth gave De Niro the basis for what would become The Irishman–Charles Brandt’s book I Heard You Paint Houses–and De Niro had such an emotional reaction to the book that he presented it to Scorsese, and the rest is history.

Scorsese reveals in the 1980s he worked with Pacino to try and get a biopic on Italian painter Amedeo Clemente Modigliani off the ground, but it didn’t see the light of day. “It never came off. I couldn’t get the financing in the 1980s. Then he went with De Palma and Lumet, so it’s a whole other thing.”

Getting Joe Pesci on board–and working with him on set

Since 1998’s Lethal Weapon 4, Joe Pesci had only made two live-action films: a cameo in the De Niro-directed The Good Shepherd and the little-seen Love Ranch. When Spike Lee asked Scorsese what Pesci is doing in retirement, the director said, “He plays golf! He comes from Jersey, I think that’s what it is. What would he do, a Snickers commercial? I don’t know what the hell is going on. We talked about it.” Scorsese on how the conversation went:

Scorsese: “No, this is different.”

Pesci: “I don’t want to talk to Bob, because Bob is going to say you’ve got to do it.”

Scorsese: “He’s just going to talk to you for a few minutes.”

Scorsese added, “It finally all came around especially when Netflix kicked in, because that made it very real, particularly with this experiment with the CGI.” Then when it came to working with him on set, “You’ve got to ask him more than once to do anything. He’s an older person now. We’re all older. What’s in it for him?”

How Donald Trump influenced The Irishman

“It was 2016 when the election happened. It was 2017 [when we shot this],” Scorsese said. “It was there. It was prominent [and] as it played it out there was resonance, there’s no doubt, in those scenes. I think you can see how pressure is applied. How things are said, but not said. Yet technically you can say, “They didn’t say this.” You follow? [Laughs.] So, the tone of it, we were very aware of the nature of the world around us at that point. There’s no doubt.”

“When I took on the picture, I made it very clear to myself, everybody around, I’m not interested. We know he’s gone. How did he go, meaning what brought him to that point, is really interesting to me. It’s really about the closeness, the friendship, the trust, and that sort of thing. [Film historian] Jeanine Basinger said, ‘I don’t know what happened to Jimmy Hoffa, but after seeing this film, I now know what happened to him because you could see him bury himself.’ It’s ancient Greek tragedy. It’s hubris. [Sheeran] tells him, ‘They are going to kill you, basically he’s saying.’ He says, ‘Don’t tell me that.'”

On the female perspective in The Irishman

One of the most powerful aspects of the Scorsese’s epic is the perspective of Frank’s daughter Peggy Sheeran, played in younger years by Lucy Gallina and older years by Anna Paquin “I kept asking Steve Zaillian if we can layer her in the story,” Scorsese said. “I decided that she doesn’t have to say anything. You see your father do something like that, I’m sorry… You see him crush the guy’s hand like that… other kids maybe, but this kid couldn’t take it. She looks at him. She knows he’s up to something and Lucy was great, but Anna ultimately was amazing in the looks. She has one line in the film. There’s something you can’t talk about. She knows it. She knows who she is. He knows she knows. Even when she’s sitting there and the police are talking about Joey Gallo being [murdered.] [The anchor said], “A lone gunman walked in..” and you see she’s looking at him.”

On the song throughout The Irishman that signifies death is coming

“As Steve was pulling the story together, I had other thoughts in mind, but then I knew it had to be In the Still of the Night [by Fred Parris and The Satins] because of those opening piano [notes],” Scorsese said. “It’s a very moving piece. I grew up with it. It’s a quintessential doo-wop of that time. Also, it’s the still of the night. The executioner. Death. In the still of the night, you know?”

He continued, “Catholicism, too. When I was growing up as an altar boy it’s all they talked about, the old Italian priests got in the pulpit. They talked about ‘like a thief in the night it will come… be ready.’ I was an altar boy at the dead masses every Saturday morning, 10:30 am, so death was very much [around me]. The flowers, the funeral parlor, the wakes. Being in downtown Elizabeth street was very much like a little village. There were several funeral parlors. I had two friends who died, one of cancer another by an accident, at the age of 18. So those funerals were devastating. The funerals were very much a part of our lives. So, In the Still of the Night.“

The films and books that influenced The Irishman

In the discussion, Martin Scorsese went so in-depth on these influences–from Melville to Hitchcock to Becker–that we expanded on them in another feature here.

Check out the discussion below.

The Irishman opens on November 1 in theaters and November 27 on Netflix.