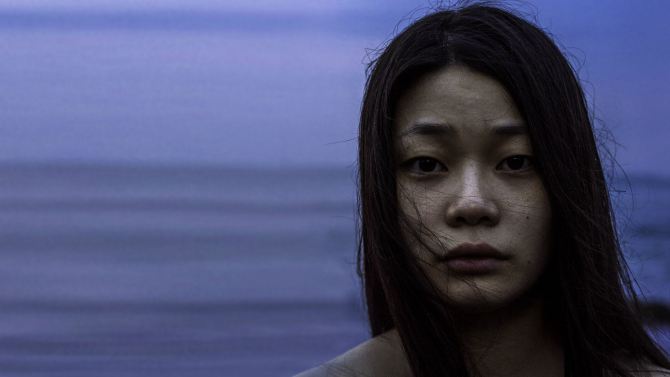 A suitcase clanks back and forth over the barren streets of Busan, spilling its contents as its owner desperately tries to stuff them back inside. This chaotic opening scene, marked by a series of jarring jump cuts, reflects the inner state of mind of our protagonist, a homeless, mentally unstable, nameless young woman. The weight of her struggle is anchored by an impressive performance from newcomer Jeong Ha-dam, whose desperate eyes will linger with you long after the final frame. Filmmaker Park Suk-young channels a bit of the Dardenne Brothers’ Rosetta in Steel Flower, the minimalist tale of a woman trying to find salvation in a bleak existence. Difficult at times to stomach, it’s unflinching in its portrait of mental illness and resonates best when the director steps back and lets Ha-dam’s stoic performance simmer in misery.

There isn’t a word of dialogue for nearly the first thirty minutes, during which time the mysterious young woman scavenges for food and shelter. It is never explained how she became homeless or why she is suffering, which lends to a certain frustration while watching her struggle. After searching far and wide in the northern part of the coastal town, all while dragging her heavy suitcase, she finds an abandoned living space before returning to the city in search of work. Unfortunately for Ha-dam, the challenge of finding a stable job while not having a permanent address or working cell phone is nearly impossible, compounded with the fact that she is unable to communicate properly with those giving her a chance to interview. Instead she finds herself victims to manipulative adults who take advantage of her naiveté and use her without paying her.

This uncomfortable manipulation feels almost like a page taken out of Lars von Trier’s playbook — think Breaking the Waves or Dancer in the Dark — with the audience forced to watch helplessly as Ha-dam’s painful treatment goes unnoticed by others. When she finally finds some solace working for a seafood merchant, his maniacal alcoholic ex-girlfriend demonizes the poor young woman, accusing her of sleeping with the boss. This culminates in a brutal confrontation where Ha-dam is humiliated and beaten by the woman while working a different job in a restaurant. These series of torturous scenes can come off as a bit masochistic on Suk-young’s part, but it’s all in the effort of creating a unique tension and mood that makes up a bulk of the film.

The only solace for the young woman is when she discovers a tap-dancing school and is entranced by the repetitive percussive noises of the novice dancers. The rhythm of the shoes gives her hope, soothing her own mental quandaries by offering an escape from reality. In these movements, the film transcends its somewhat retreaded material into something sublime. In the final moments, amidst the crashing waves of a heavy storm, she dances away her pain and sorrow and gives the audience something the film has desperately tried to hide: hope. Though sometimes a tad repetitive and definitely not an easy experience to digest, Jeong Ha-dam’s powerful breakthrough performance elevates Steel Flower into a higher stratosphere than the narrative deserves.