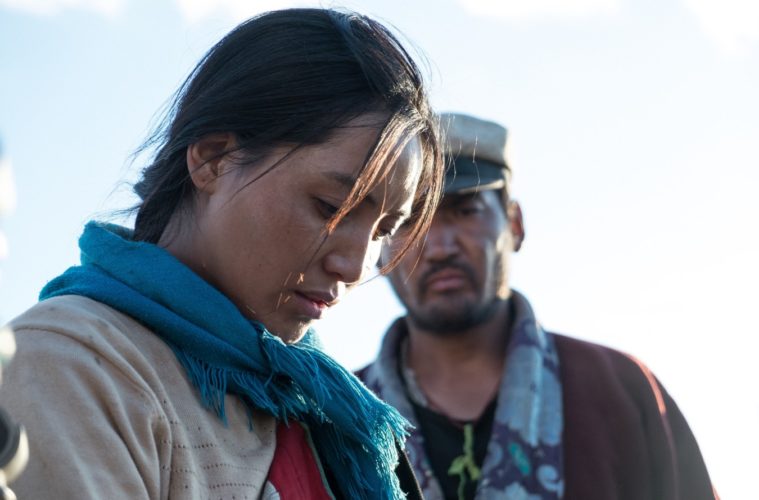 It’s hard to think of anything that’s as inherently ridiculous and quite literally vital as condoms. Nothing more than a little piece of latex, but what moral, social, religious implications it carries. These very human complications of birth control lie at the heart of Tibetan director Pema Tseden’s delicate, thoughtful drama Balloon.

Set in the mythically pristine highlands of Tibet, the film revolves around a sheep-rearing household carrying on a simple, earthbound lifestyle you can imagine has existed for centuries. Man of the house Dargye (played by Pema Tseden regular Jinpa) is a rustic, steak-eating farmhand with a deep, unspoken love for his family, consisting of unassertive hausfrau wife Drolkar (Sonam Wangmo), non-stop scripture-chanting old dad, and three sons – a limit under the family planning policy enforced by China since the 80’s. One day, the two youngest boys are playing with their balloons and get chastised by Dargye because – to the bewilderment of the boys or even grandpa – those are of course not balloons but the remaining pair of their parents’ condoms hidden under mom’s pillow. This means Drolkar has to pay another visit to the clinic, leading eventually to some brutal, life-changing decisions. The screenplay, also written by Pema Tseden, cleverly juxtaposes the biological and political mandates regarding procreation. On the one hand, the natural world favors the virile, meaning potent rams are prized possessions, provided only on loan during mating season, and barren ewes can be expected to hit the butcher’s stand the soonest. That’s just the order of things for Dargye & Co., and they wouldn’t know it any other way about babies if the government hasn’t said three’s the limit. Which is not to say population-control policies aren’t based on the best of intentions – God knows humans deplete this planet’s resources the way sheep can ever do – but, as with Thano’s snap, unimaginable sorrow is inevitable when you put a number on human lives.

To drive home the point of why such numbers are more than just math, Balloon lays out the emotional aspect of sex and the spiritual significance of abortions, uniquely human concerns that make controlling their sexual practices just a bit more complicated. In a beautifully inconclusive subplot involving a novelist/ schoolteacher and Drolkar’s sister who’s a nun, we see two people who are clearly in love but so traumatized by their past relationship they’re both still seeking redemption. We never learn the exact reason for their breakup, but it tells you enough about how mating between Homo sapiens can leave scars, sometimes enough to make a young, full-blooded girl quit intimacy altogether. Meanwhile, call it superstitions, philosophies or religions, but human beings have been telling stories about the afterlife forever. And the deep-rooted Tibetan idea of reincarnation can make abortion, the necessary accessory of any enforceable birth control program, that much more of a sinful act. And so dilemmas and existential questions abound in this movie that starts with two kids waving around a pair of blown-up condoms, but Pema Tseden never goes preachy or pointedly political in his direction. Instead, he opts to be a sober, merciful observer, letting great conflicts play out in the unremarkable every day. And thanks to his efficient, expressive hand, you’re with these characters every step of the way, however exotic their circumstances may be. Speaking of, Lu Songye’s vibrant, sensitive cinematography must also be credited. Nothing overtly fancy in his choices, but he knows he has the most magnificent natural landscape and a rich, ancient civilization to work with, so pulling back to let those details shine is absolutely the right way to go.

In a year that saw the Chinese censorship authorities working overtime, it’s somewhat surprising that Balloon and Berlinale winner So Long, My Son–both of which could be interpreted as regime-critical–made it out to international festivals. In any case, kudos to Pema Tseden and Wang Xiaoshuai for giving political indictments an undeniably human voice. Their films don’t really pick sides, they just show you, in a most sincere, relatable manner, the expected or unexpected costs of a well-meaning, amply justified government decision when it finally trickles down to those it affects.