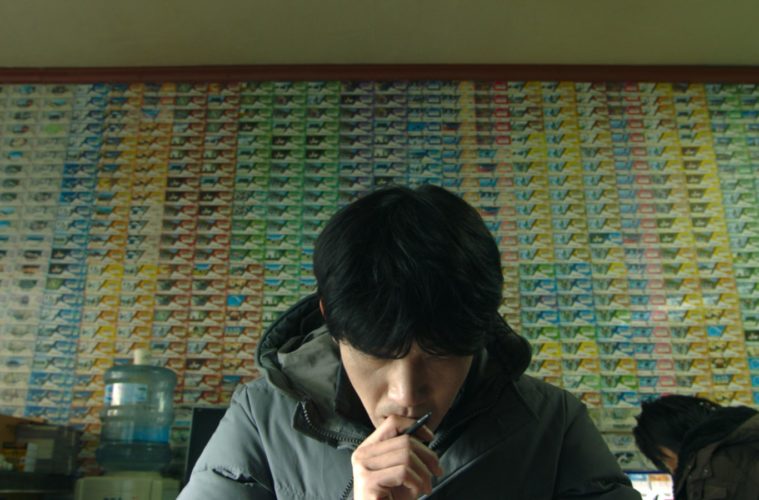 Having too many ideas for your film can be a curse. It’s understandably tempting, especially for first-time filmmakers, to show people all you’ve got in one go. But sometimes that can backfire pretty badly.

Korean writer/director Bong Joon-young’s feature debut revolves around a miserable young man named Do Maengsu (Kim Doyoon) who is failing at his job as a door-to-door salesman, chased by loan sharks and plagued by a constant hallucinatory voice in his head. Pushed around by just about everyone existent and non-existent, Maengsu’s only solace in life is his beloved, if somewhat distant wife Ria. To save Ria from the loan sharks’ threats, the couple fakes their divorce and Ria goes into hiding. But as fate would have it, Maengsu wins a huge lottery that could turn their life around shortly thereafter. Thus begins his trippy journey to find his secretive (ex-)wife.

So far so good. You sense you’re not in the steadiest of hands, as the film goes from being quirky to fantastical to horrific, seemingly unable to settle on one tone or stylistic choice. But the basic premise is strong, both unusual enough to get your attention and packing a relatable human component ready to be expanded upon. You’re intrigued to find out how someone so down on their luck can be changed by an untimely windfall. You want to know where the wife went and how the fake divorce may come back to haunt them both.

Sadly the intrigue soon fizzles out, as Bong continues to pile on plot devices and tries out directorial tricks until the narrative becomes utterly, dispiritingly shapeless. This is a typical case of a movie suffering from being too many things at once. It’s in part an unconventional love story between an elusive, unhappy woman with a secret and a professionally frustrated man obsessed with impressing her. Here and there you see some potential in pursuing that angle, especially after finding out where Ria went after the staged divorce. But then you just wish the film could concentrate on being an investigation of marriage or gender dynamics in South Korea today.

Unfortunately that is not to be, seeing how Lucky Monster is too busy trying to also be a gangster thriller with cute surrealist elements AND a dead-serious psychological profile of a loner losing his grip on reality/social norms.

After the lottery win, the film introduces several dubious, hyper-stylized characters who complicate the protagonist’s life. Maengsu, who starts out as a meek, awkward pushover one often associates with young Asian men bogged down by stress and expectations, becomes increasingly unhinged thanks to his dealings with these folks who are prone to cartoonish, over-the-top violence. This plotline could have been interesting too as an American Psycho-type study of the symptoms of hypocrisy and pan-societal repression. But the film can’t bring itself to fully commit here either. Instead, we’re distracted by Maengsu’s various attempts to track down his wife and the many, many dream/fantasy sequences that get us nowhere.

The eccentric, comically heightened film ends on a bloody note that also feels somewhat out of place. As the explosive climax of a wildly unfocused odyssey, it packs enough shock value but lands nothing beyond a reflex flinch or two. The problem is that you can’t really identify with any of the characters, nor is it possible to detach yourself from the story altogether and just enjoy the spectacle, because the filmmaker is clearly trying to say something with the amped-up violence.

It’s a Korean specialty to tackle profoundly dramatic themes by way of entertaining, sometimes extreme, absurdist genre cinema. On the evidence of Lucky Monster, Bong shows promise on both fronts. There’s a kinetic liveliness/playfulness in his touch that lends itself to imaginative commercial filmmaking. And he has his eye on deeper humanistic concerns, which he addresses here via hijinks about gangsters and lovers. Ultimately things don’t come together for this tonally and narratively disjointed oddity of a feature debut. But we shall be looking forward to his future projects where hopefully he’ll manage to bring his talents and ambitions together in one fully-realized vision.