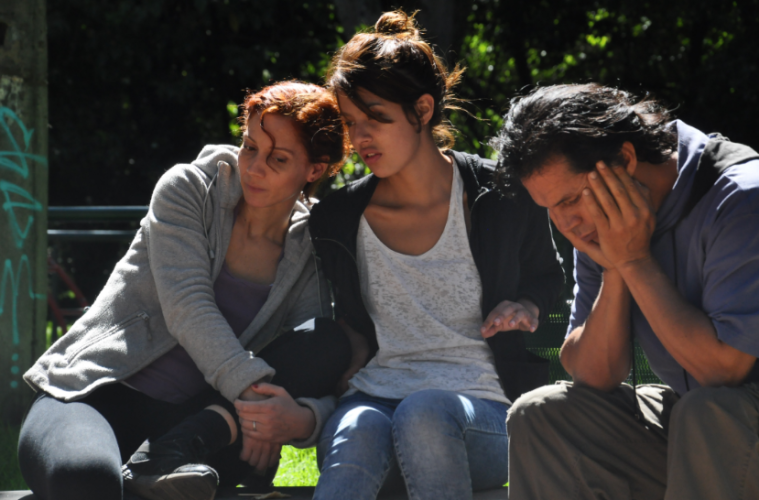 Lina Rodriguez’s This Time Tomorrow delivers its thesis through three clear demarcations in time — or, rather, extended shots, beginning on a sunlit tree, coming into the middle with a lone coffee pot, and ending with clouds drifting through the sky. One could say Rodriguez is evoking Ozu’s similar shots that give a sense of the life that pulses through empty rooms and the spaces between, clearly separating the almost indifferent world from the characters who inhabit it.

Though we come to focus on a Colombian family living a comfortable middle-class existence in Bogota: mother Lena (Maruia Shelton), father Franciso (Francisco Zaldua) and their 17-year-old daughter, Adelaida (Laura Osma). Working as an event planner, Lena seems to ultimately run the house, being introduced as an off-screen voice that pesters her daughter about not performing her chores while she lays her head on her father’s chest, sleepily watching television. From there, we see far more of her in the work place than Francisco, the “creative” type who’s occupied as a sculptor and art teacher.

Going about contrasting Lena’s hectic professional life with Adelaida’s social interactions — in the latter’s various hangouts with her teenage friends, they chat about virginity and sex toys or who’s texting or seeing someone else — This Time Tomorrow still doesn’t accumulate much in the way of conflict. Eventually, Lena and Franciso ground her (an oft-used dramatic trope which seems strangely antiquated or rather unrepresented within contemporary cinema) after she stays out far too late one night. Yet this is soon followed by Lena’s birthday party, and the three together in their apartment, singing and eating cake, even if somewhat ordinary, seems like the film’s idea as the ultimate depiction of happiness.

There comes a turning point: (spoiler warning) Lena’s sudden death, which is communicated through a montage of grieving family faces, be it Francesco’s or Adelaida’s or even that of previously unseen, unidentified relatives. There isn’t much interest in extending the grieving process — a lack of screaming or breakdowns of any sort, maintaining a downbeat, if measured tone — because, of course, the march of time goes on no matter what. When Adelaide asks her aunt if she believes in God, she affirms yes, because there must be something that binds us all together, right?

Rodriguez shoots mostly in fixed long takes capturing seemingly mundane conversation — which, suiting the film’s muted drama, seems most attuned to capturing the slightest shifts in body language and speech rather than needlessly spicing up a “chamber drama.” Though the most interesting instances are when the camera still holds to have one character leave a room while another stays or enters, the family home almost in a constant shift.

While the film is perhaps a little too satisfied with its understatement (that still manages to be somewhat thematically blunt or just simply upfront), at least, in still believing in the power of its characters and their simplest actions, it achieves an overall earnestness that’s hard not to be moved by.

This Time Tomorrow screened at the 2016 Locarno Film Festival and opens on August 4 at Metrograph.