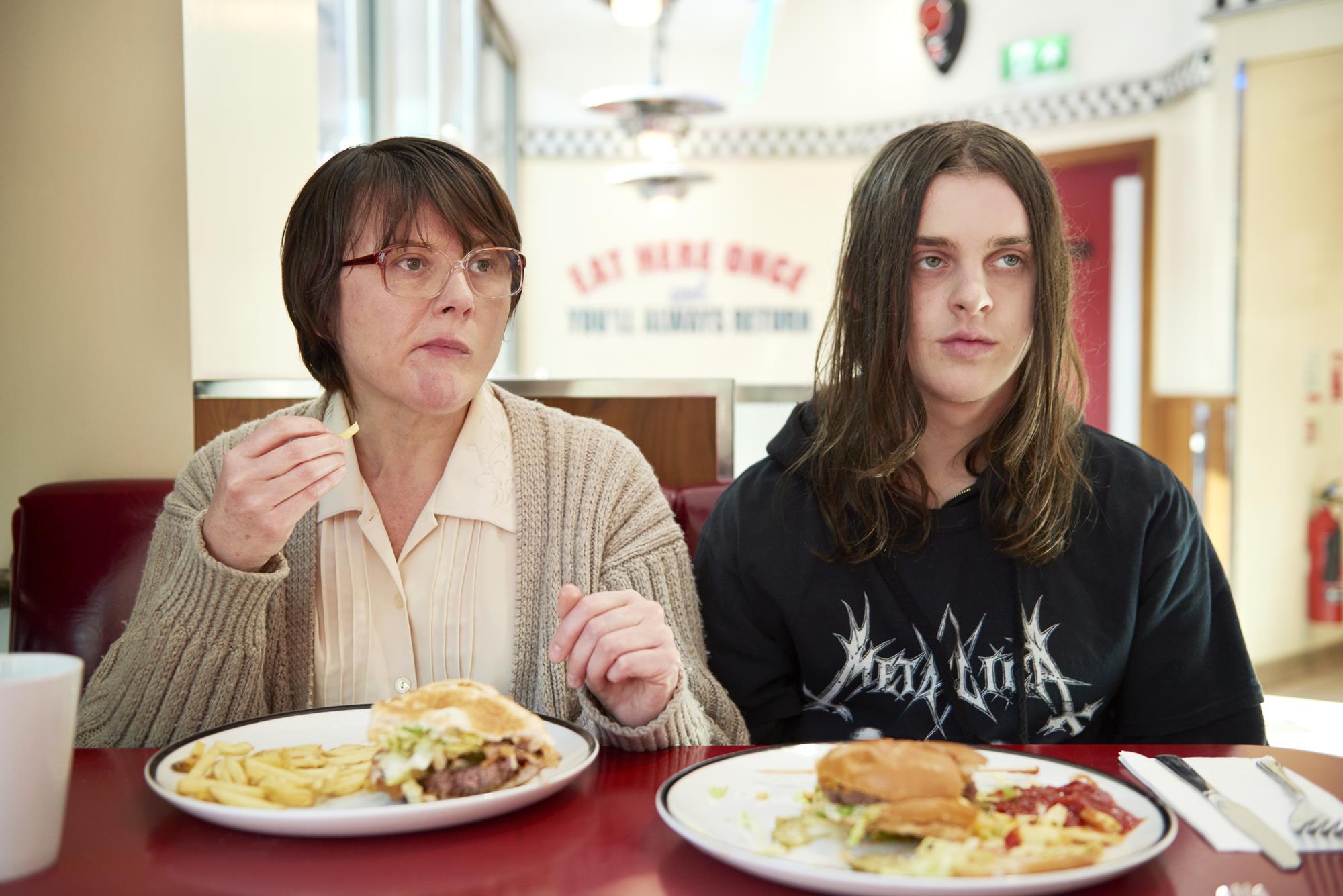 Laconic and moody, a Metallica t-shirt worn like a second skin, fifteen-year-old Daniel hobbles through his pastel-colored, chintzy home in a stretch of British suburbia like a black sheep in a Wes Anderson hallucination. He’s a few days away before his first-ever trip to the States, where his father moved with a new woman, with whom he expects his second child. A summer spent basking in the Florida sun is a far more alluring prospect than frittering it away with his best friend Ky and awkward, lonely mother Sue, but an intercontinental phone call is all it takes to make dreams crumble. As Daniel’s father tells his son that, regretfully, the trip is canceled, Sue is left to take up the pieces. Days of the Bagnold Summer, Simon Bird’s feature debut, is a chronicle of a failed journey, and of the far more intricate, tortuous one mother and son embark in the weeks that follow. It’s a coming of age tale where the road to maturity unfolds as a twofold quest, an opening up to the world as much as to one another.

Based on the graphic novel by Joff Winterhart and adapted for the screen by Lisa Owens, much of the warmth in this gentle-paced comedy draws from the balance it strikes between mother and son, from the love and compassion each is penned with and embodied. Bagnold, unlike other entries in the genre, is not Dan’s story, but the story of a shared journey. Bird and Owens are careful enough to ensure son and mother share just as much screen time, and pour just as much affection in the clumsy middle-age awakening of put-upon Sue as in the teenage rebellion of her laconic, cranky son. Daniel is played by Earl Cave (Nick’s son), and Sue by Monica Dolan. They are as terrific together as they are apart – Sue as the preternaturally awkward, hapless librarian with a penchant for history and sheer terror of social gatherings, and Daniel as the metalhead and singer-hopeful drenched in boredom and anger.

Winterhart’s source text gives Bird–who became a household name in the late noughties for his role in the British cult TV comedy series The Inbetweeners–ample reign to practice his knack for chuckles, skills he’d already boasted in his 2016 SXSW short Ernestine & Kit. And Bagnold thrives on the quirky, goofy mom-son exchanges Owens peppers throughout her script, which distills a source material comprising largely of independent, standalone vignettes into some three-act plot. Rarely, if at all, do the one-liners feel too on-the-nose, meshing instead with a lingering nostalgia, the kind of empathy and flair for details of someone who remembers his old turf and conjures it up again–a feeling accrued by the tracking shots pushing and pulling in and out of rooms, like images sourced from old memories, and set free again. To the countless Inbetweeners aficionados out there, the sentiment will ring all too familiar: underneath all the banter Bird and his high school mates shared at the fictional Rudge Park Comprehensive was show creators Damon Beesley and Iain Morris’ endearing eye for the suburban world the boys hailed from, an ostensibly banal and ordinary microcosm that swelled into a universe ripe with endless wonders, and dotted by deranged lunatics, weirdos, heroes, legends.

Bagnold bursts with the same compassion, and it is interesting to see Bird extend it to Sue and Daniel as well as the quaint, seemingly innocuous and uneventful world they inhabit, stripping it of its anonymity and restituting it as a land of eccentrics, of troubled and flamboyant folks. Cinematographer Simon Tindall’s vivid palette paints the ride as a protracted, late summer afternoon, and original tracks by Belle and Sebastian add to the light-hearted vibe. For this is not a story of people itching to leave suburbia, at least not as restlessly as other emblematic characters (cinematic or otherwise) to whom the British province served as cradle–think of Karim, the protagonist of Hanif Kureishi’s 1990 novel The Buddha of Suburbia, who hailed London as Xanadu, and scorned the native suburbs south of the city as a pestilent wasteland. The frustration and anger Sue and Daniel are wrapped in have little to do with their dwellings, and a lot more with an unresolved dread, an inability–or unwillingness?–to step up and change the course of the events. They do not itch to leave the suburbs behind, because they lack enough courage to stand up in the first place. They are loners grappling with their own chronic insecurities, and part of the charms of Bagnold is to witness as both overcome them.

Witty and quirky as it may be throughout, Bird’s debut watches its protagonists grow together, arcs that stir as many chuckles as they spring out grief and loneliness. Cave and Dolan share the merit of ambling their characters away from stereotypes: sure, Sue may well strike, at least at first sight, as your archetype of the clumsy, introverted single mom (“just a dreary old librarian,” as she once describes herself), much like Daniel may initially tick all the oft-abused introverted-cum-frustrated teen tropes. But they both add enough compassion to their onscreen personas to ensure neither ever morphs into a one-note cliché. A journey shared between mother and son, Days of the Bagnold Summer does not end when either one overcomes their fears, but when they both nurture and rescue a whole: a family.

Days of the Bagnold Summer world premiered at the Locarno Film Festival.