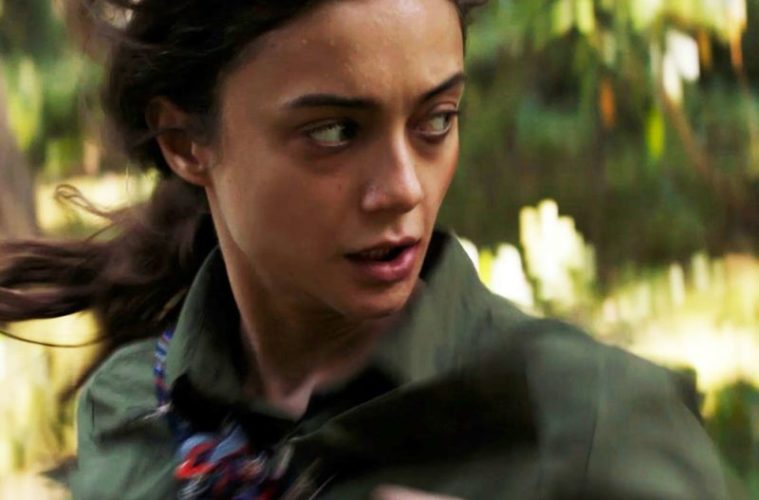 Reception can be pretty unreliable atop the mountains of Turkey’s Black Sea Region, so the women picking tea leaves in Çağla Zencirci and Guillaume Giovanetti’s timely allegorical drama Sibel have resorted to another method: they whistle. Not just plain one-note chirps, but elaborate and melodic trills-packed conversations that relay anything from a heads-up to some gossip on the village newlyweds. It’s an original escamotage of guaranteed comedic effect, which the directing duo translate via subtitles. But while the community of women farmers treat it as a mere alternative to verbal chats, for one of them, 25-year-old Sibel (a terrific Damla Sönmez) whistling is the only way she can communicate.

Born mute and raised by single father Emin (Emin Gürsoy) with her younger sister Fatma (Elit İşcan), Sibel walks the remote community as a pariah who, in the kind words of fellow women farmers, brings “bad luck.” Just what exactly that bad luck amounts to Zencirci and Giovanetti do not say, but the script (penned by the directing duo and Ramata Sy) gives a clear sense that the community’s disgust for Sibel’s muteness goes hand in hand with a profound aversion toward her inability to fulfill the role a deeply patriarchal society has given her: find a man, and bear his children. To be sure, Sibel might be strikingly beautiful, but there is no way on earth she’ll ever be able to get married, which probably explains why her father allows her to run around with no headscarf, and even gives her a rifle she uses to patrol a little tree house in the middle of the mountains.

It is here, nestled into a remote woodland, that Sibel hits a rich allegorical terrain. Away from her family and coworkers, the 25-year-old spends her days hunting for a gigantic wolf local women claim has threatened the village for as long as they can remember. “They’ll thank me once I bring them the dead wolf,” Sibel tells (well, whistles to) another mountain hermit, Narin – an elderly lady who’s still waiting for her teenage love to come back to her, and who other women have ostracized with the same virulent hatred they feel toward Sibel. What and who the wolf really is another question Zencirci and Giovanetti leave deliberately unanswered, but when the women complain that men forbid them from taking part in social gatherings “because the wolf may be around,” the feeling is that, far from a wild beast, Sibel is up against a much bigger, terrifying Leviathan.

Treated as a lost cause and a constant source of embarrassment (“forgive her,” her father says to a couple of officers, “she’s handicapped”), the 25-year-old may well be exempted from Emin’s patriarchal scrutiny, but younger Fatma – forced to wear a headscarf and subject to a sense of panoptic surveillance – is not. Nor is Emin himself. Perceptively, Sibel understands patriarchy as a straightjacket affecting both men and women. When a lady from the village comes to drink tea at Emin’s and questions his decision to never remarry, the way she shushes his explanations is illuminating. “All I see is that your clothes are wrinkled, and you’re the one serving me tea.”

If the most idyllic scenario Fatma can aspire to is to marry and give birth to a boy (“If God grants you a boy you’ll live a happy life,” the village women repeat as a mantra), Emin’s worth vis à vis the rest of his village is also influenced by his gender – better yet, by how well he can fulfill the role a male-dominated society has assigned to him. If Deniz Gamze Ergüven’s 2015 Mustang – a feature that would make for a terrific double bill – shares with Sibel a perceptive eye for the way a cancerous patriarchy can stifle a girl’s coming of age, Sibel takes the critique a step further, shedding light on its cross-gender repercussions.

Hunting for a wolf with a rifle, red boots, and a red bandana, Sibel’s character harkens back to a centuries-old Little Red Riding Hood-esque mythology, but in the context of today’s discourse, it feels ineffably timely. In one pivotal scene, Sibel walks Fatma to the bus as people take to the streets to insult them both. Fatma lowers her eyes in shame, but Sibel lifts her chin up. The defiant smile she gives her younger sister, like much of Sibel’s uplifting and rebellious aura, needs no words or whistles to sink in.