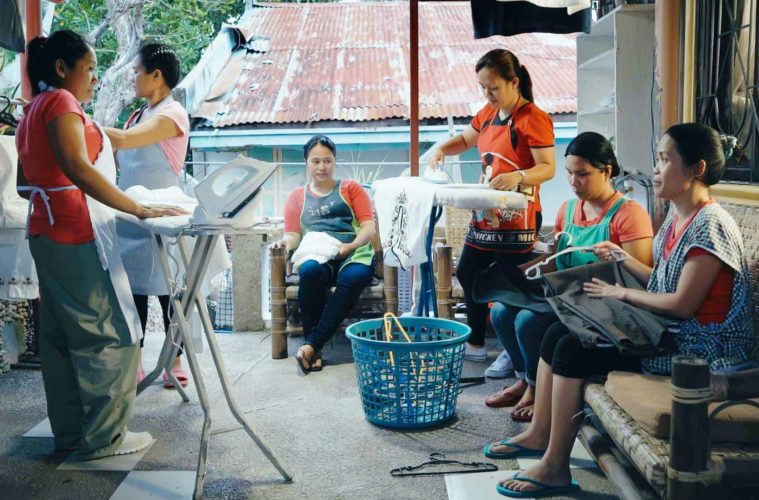 Locarno Review: ‘Overseas’ is an Engrossing, Piercing Portrait of People Pushed to the Margins

In a two-story building down a chronically flooded street, a dozen Filipino women brace for an encroaching departure. They are the domestic workers at the center of Sung-A Yoon’s singular hybrid Overseas, a piercing portrait of young maids waiting to be shipped abroad, and training to withstand the pain the journey and separation from home will stir. Echoing Alfonso Cuarón’s Roma–of which it shares the same humanism, and with which it would make for a terrific double bill–Overseas is a harrowing story of resilience, an elegy of people pushed to the margins, whom Yoon restitutes as dignified and strong-willed fighters, in a work that dances between reality and fiction to an engrossing extent.

Inspired by the work of sociologist Asuncion Fresnoza-Flot and her seminal text “Migrant Mothers Without Borders,” Sung-a Yoon crafts a fly-on-the-wall look at an academy where young maids learn the ropes before being sent off to join the 10 million Overseas Filipino Workers (OFWs) currently deployed abroad. Building upon her previous autobiographical documentary Full of Missing Links, which chronicled Yoon’s journey to South Korea in search for her estranged father, this is another study of distance; save for a few moments where the camera singles out this or that a worker among the group, it remains a resolutely multi-character, polyphonic journey, a collective portrait of young women and the sisterly bonds they form as a protective shield.

Each year, an estimated 200,000 Filipino women leave their homes to find work abroad, most of them embarking on two-year stints that allow little to no contact with the loved ones left at home. Whether the journey unfolds as a smooth ride or one paved with endless humiliations, as a seasoned maid warns the academy’s newbies, “is just a matter of luck”–though Yoon makes it clear that pain and deprivations are far more common than happy-ending gigs and accommodating employers. “There is never any time to rest,” runs as a leitmotiv all across the first-hand tales shared by veterans to newcomers, myriad memories that end up depicting the domestic work as modern-day slavery–aggravated by countless instances of sexual abuse. Deepening the anecdotes’ inhumanity, harassments are so frequently reported by the maids they end up hashed as an inescapable component of their life outside of the Philippines. “They used to molest me,” one tells her colleagues: “if I got lucky they would only grope my genitals.”

Not only does the academy painstakingly teach maids how to perform all sorts of chores and duties–from setting dinner tables to folding blankets to cleaning elderly, bed-ridden employers; it also prepares them to withstand the pain and humiliations they’ll be facing in their time abroad. But it does so in a most peculiar way: by having trainers, veterans and newcomers re-enact those abuses, be they verbal or physical, and stage them in performances that shock for their authenticity as much as the emotional response they stir among the re-enactors. They are scripted routines for which the maids rehearse as if they were to put on a show for some invisible audience – down to makeup, costumes, and stage directions passed on by the academy’s mentors. In one, a maid-turned-actress shouts to another, “I told you to clean, not to cry,” while the employer’s daughter begs her mum to take it easy on her: “she’s just a human.” Fictional and improvised as they may be, they are sketches billowing with tragic vividness–the humiliations ringing all too real to those who’ve gone through them already, and those who wait for their own share.

In its constant seesawing between truth and fiction, anchored on traumas experienced and re-enacted, there are moments Overseas bursts with the same authenticity of Joshua Oppenheimer’s diptych, The Act of Killing (2012) and The Look of Silence (2014), two other portraits of people staging past traumas and opening unsealed wounds in the process. But it ushers in a different kind of re-enactment, too–a pre-enactment, if you will. The abuse brought on stage serves as a precautionary measure, a means to vaccinate from future harm, to familiarize oneself with pain to reduce its magnitude when it’ll eventually hit, full-strength.

“No matter how crazy your schedule is,” a mentor warns her class, “never cry in front of your employer: it shows weakness, and Filipinos are not weak.” As the training unfolds and the routines accrue in desperation, the plight of a few young women swells into a struggle to safeguard the integrity and reputation of a whole nation. Irony meshes with tragedy: while footage of President Duterte hails OFWs as heroes and heroines, Sung-A Yoon zeroes in on the most devastating last stages of the maids’ preparations: the goodbyes to the loved ones they’ll leave behind. Duterte’s crass propaganda evaporates: this is not a grand, scintillating canvas of some emblems of a nation’s might, but an intimate portrait of vulnerable, unassuming, stoic survivors.