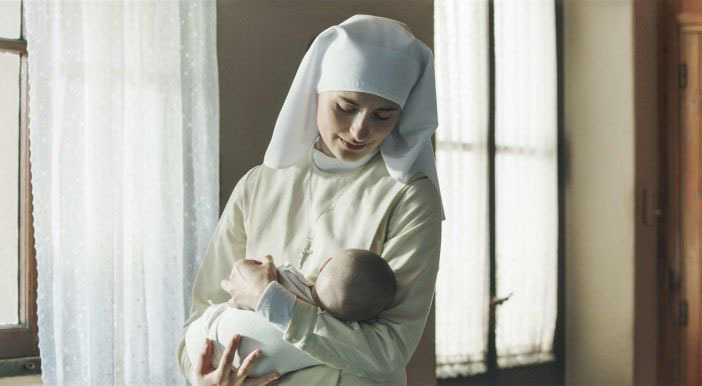 Locarno Review: ‘Maternal’ is a Poignant if Pedestrian Take on the Savior Complex

The cross hangs heavy in the opening shot of Maternal, the first narrative feature from Italian documentary filmmaker Maura Delpero. In this introduction, we see a young and beautiful Argentinian nun who is about to start her first day in a new hogar–a convent that houses and supports young single mothers and pregnant women. She gives her crucifix one last squeeze before leaving the car and the weight of the gesture is clearly felt.

The Catholic Church remains, for good reason, one of the most bloated fish in the barrel–the lowest of hanging fruits–but Delpero’s film, to its credit, neither shoots or grabs. The director visited four hogars while researching Maternal and says the only reason she chose the Catholic one was that it seemed to have the most interesting hierarchal system. Faith thus gives a significant edge to Delpero’s story but the film is more accurately a study of three women: namely Fatima (played by Denise Carrizo), an introverted semi-Ingénue and mother of one, soon to be two; Luciana (Augustina Malale), mother of the adorable Nina (Isabella Cilia, the film’s MVP), Fatima’s roommate and confidant, and also the younger and thus wilder of the two; and Sister Paola (Lidiya Liberman), the young nun we met in the opening shot. When Luciana goes AWOL one day it is Sister Paola who steps in.

Last year saw the release of Sara Colangelo’s The Kindergarten Teacher, in which Maggie Gyllenhaal’s depressed educator found menacing solace as the self-appointed Svengali to a potentially prodigious toddler. Maternal is concerned with a similar albeit more benevolent saviour complex. This is courtesy of sister Paola, a woman who is about to take the vows that will, in theory, end the possibility that she herself might have children. The nun takes to young Nina wholeheartedly when Luciana leaves and allows herself to get too close. The film is at its best and most moving in these scenes–with Liberman striking up a warm and endearing bond with her young costar. It is, however, Paola’s growing concerns about her conduct that prove most interesting. Could she be seeing it all as a final test from God? Delpero dangles that tantalising idea but sadly leaves it unexplored. Liberman’s saintly, slippery performance is key to all this; best seen in close-up as she finally takes her vows; holding back the tears as she glances Nina in the crowd cheering her on.

The dynamic between the three women is quite basic at first but grows in complexity as the narrative narrowly twists and turns towards its largely predictable denouement. A toe is dipped into the darker side of their psyches but the film shows restraint where others might have waded in. Indeed, despite some lovely camera moves and painterly tableaus from D.P. Soledad Rodríguez, Delpero is here for the realism–even the craggy older nuns, hovering stoically and disapprovingly throughout, never slip into caricatured villainy. That proves an honourable decision on the filmmaker’s part but it does leave the finished product looking a touch pedestrian. One of the best genre critics around called The Kindergarten Teacher “the best horror film I’ve seen this year.” To compare the two is fatuous and frankly unkind but to Maternal‘s detriment, it is difficult to imagine it producing a reaction even remotely as extreme.