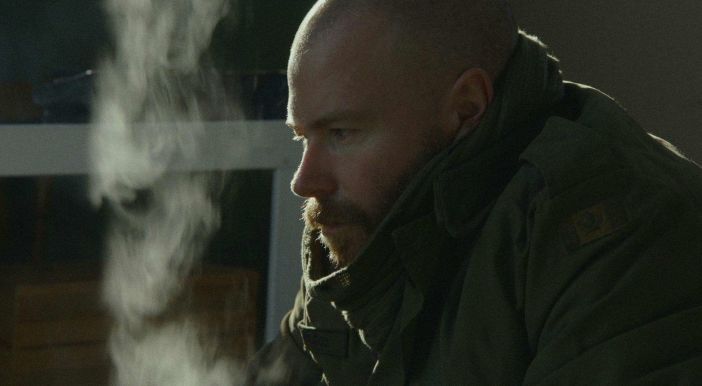 If Ghost Town Anthologies and A Skin So Soft were emblematic of the two strains of Canadian auteur Denis Côté’s recent work then his latest could be viewed as something of a hybrid. A Skin So Soft, in which he strived to show the sensitive side of male bodybuilding, was the most recent of his stylized ethnographic documentaries. Anthologies, the story of a small, dying Quebecois town that is visited by the ghosts of its deceased locals, was typical of his work in fiction: undefinable genre; isolated locales; people under duress and so on. This mixing of genres–as well as fact and fiction–has always been synonymous with the Côté brand and Wilcox, a new crossbreed, comfortably fits both bills.

A medium-length, experimental fiction film shot as a fly on the wall documentary, Wilcox follows a drifter–eponymously named–as he goes about his day-to-day. Côté shoots from a distance and overlays the imagery with an ambient score courtesy of the avant-garde jazz artist Roger Tellier Craig–the film is thus presented without dialogue, and for the most part without on-site sound. The result is a surprisingly sentimental and uplifting bit of hypnosis, and maybe even a polite rebuttal to something like Leave No Trace in that Wilcox, for the most part, seems a fairly content fella.

The director’s subversions take a short while to find a shape but when they do his intent becomes clear. Wilcox—who is clearly ex-military, although such things are left largely ambiguous—spends the first third of the movie walking and sleeping and eating, only looking comfortable for the first time when he runs into a group of fellow veterans. Later he enjoys the pleasure of all sorts of acquaintances: an old wiry-haired hippy who plays him a tune on guitar; a wide-eyed man who cooks him food and shares some wine; and best of all, a small herd of Alpacas who immediately warm to him.

If we take the image of big, stone-faced Michael Shannon trying to communicate through sign language with his boy in Take Shelter as a 10 on the endearing tough guy does nice things scale then Wilcox’s various pleasantries probably come in at a solid, consistent 7. (Not bad.) At one point he rides a bike through a field and seems to get as much enjoyment out of it as Paul Newman did in Butch Cassidy and The Sundance Kid. This is great stuff, and no mean feat having apparently been shot on a series of rather cold, damp looking days in Quebec. Moreover, Côté spares us none of the discomforts of Wilcox’s lifestyle: not the freezing places he finds to sleep nor the basic effort of getting from A to B.

The director bookends his film with a series of blurbs on real-life survivalists and deserters, three at the beginning and three at the end—including a particularly fascinating story of a Russian woman who got homesick in New York in the ’40s and so made her way to Alaska and was last seen taking a boat out on the Bering sea. Côté is clearly enamored with these people and if the stories at the end come off more positive than those at the beginning perhaps that appreciation has rubbed off on you.

He also, quite pointedly, includes the tale of Christopher McCandless, who was brought to the screen in the form of Emile Hirsch in the Sean Penn-directed Into The Wild, a film that seemed to revere its protagonist’s disregard for money and commodities while ultimately proving a cautionary tale. Côté is less interested in all that and might even be responding to Penn’s film with the ending of Wilcox, in which his hero comes across an abandoned Greyhound bus but discovers great joy where Penn found hubris.

Wilcox premiered at Locarno Film Festival and is streaming on FestivalScope through August 31.