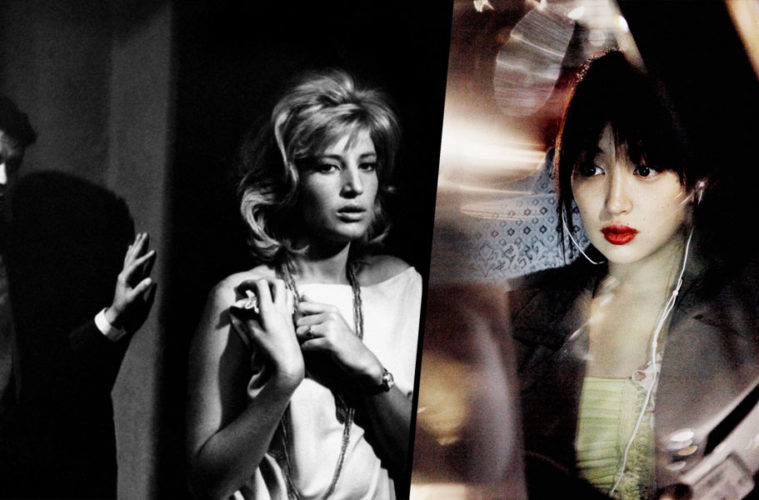 ‘Like Someone in Love’ and ‘L’Eclisse’ Hit Criterion: Public Space, Private Life, and Fractured Romance The opening shot of Abbas Kiarostami’s Like Someone in Love is truly one of the most exciting moments the Iranian director has ever put to screen. The image itself is of an absence — an empty chair at a Tokyo bar, the important characters offscreen. But we hear them, creating a tension that plays with our sense of what is public and what is private. The same could be said for the opening scene of Michelangelo Antonioni’s classic L’Eclisse: it starts in an apartment, as the film’s protagonist, Vittoria, explains how she is finally fed up with her fiancé. Although they are technically alone, this area feels stuffed with inanimate items. Even as they sit far apart — in different rooms, no less — the objects still consume the space and push this pair together, an awful fan continuing to spin and fill volumes of the room. She can’t take it and opens a window, but even outside, a giant skyscraper still lingers over them.

Kiarostami had never before struck me as a filmmaker influenced by Antonioni, but watching Like Someone in Love and L’Eclisse, which are both now on Blu-ray from The Criterion Collection, provides an ample opportunity to consider these films and filmmakers in tandem. These are less films that have direct links and more ones united by an approach to urban environments, especially the odd lines between public and private spaces in modern life. These films might sit 50 years apart, but their approach to what might best be described as urban suffocation is at times strikingly similar.

The Antonioni film — the third in his trilogy of disillusionment, following L’Avventura and La Notte — remains one of his most pared-down works. Stripped to a single plot, it’s simply a “will they-won’t they” story between Monica Vitti’s Vittoria and Alain Delon’s Piero. The two meet after Vittoria flees her fiancé in search of her mother, who is herself too busy at the local stock exchange to provide so much as the time of day while pandemonium ensues. Even a minute of silence carved out in honor a fallen comrade turns into a tense standoff, a colleague murmuring under his breath that “a minute is worth a million.” It is here that Piero suffers a major blow to his funds, thus instilling the depression that will force him to seek out Vittoria. In fact, their own relationship seems shaped by the ups and downs of the market, controlled by abstract forces that are certainly different from the problems of the neo-realists of the country had explored less than a decade before. Jonathan Rosenbaum, writing in his essay included in the Criterion booklet, notes Vittoria’s repeated refrain: “I don’t know, I don’t know.” While many have connected L’Eclisse to specific political and economic situations occurring in Italy during the summer it was shot, the film seems only tangentially interested in as much — Vittoria’s worries about love feel almost like indescribable forces. She always seems looking elsewhere, either in interest or fear of the world around them, while Piero seems solely focused on her. Antonioni’s mise-en-scène is always cluttered as they carefully step their way through mansions, suburban streets, and more. They are never just them; they are always a part of the environment they inhabit, as Antonioni twists the camera through doors and hallways, allowing both Vittoria and Piero to observe the people who surround them. As Gilberto Perez notes in his essay on Vitti, “[she] is a performer of attention, which she pays to her surroundings and receives from Antonioni’s camera with much the same inquiring, responsive intentness.”

As much as these two declare their love for one another, they’re always looking elsewhere around and beyond surroundings, thus necessitating the film’s masterful, seven-minute closing sequence, perhaps the best moment of the director’s career. Their final meeting turns into emptiness — a street corner where neither appear. Instead, we are left only with the public space’s own rhythms and gestures, day turning to night. If their love is true, it is private, and thus impossible for Antonioni to capture.

One could say a similar event occurs in Kiarostami’s film, an intensely claustrophobic experience unlike most of the director’s other works, which have mostly been set in expansive and open environments. On Akiko’s journey to a client, she listens to a series of voicemails left by a grandmother who has taken a train in to see her. She feels utter grief in her ambivalence, but it’s still her own grief — no one else can hear the voicemails she listens to through her earbuds. This private pain of hers is enacted in public, shot with the reflection of Tokyo’s lights beaming across her face. Yet there is a private world out there, too: the one enacted by Takashi, the older gentleman Akiko visits on the outskirts of Japan. (A Japanese friend of mine has pointed out that Kiarostami evinces little fidelity for an accurate geographic map of Tokyo, but Richard Peña has noted that many Iranians will say the same of Kiarostami’s Tehran.) Their night is filled with confusion — Akiko is a prostitute, but the older man treats her like an awkward first date. Are we seeing something that is authentic, or simply its representation? This is private desire enacted through public means. There is no chance that Akiko and Takashi can become Vittoria and Piero; their interaction is simply a replication of something authentic, noted through a comparison between its female lead and the one in Chiyoji Yazaki’s Training of a Parrot. “I always thought it was the parrot teaching the girl,” Akiko slyly remarks, for in a world only with public spaces, it is hard to discern representation from authenticity. The same thing happens to Noriaki, Akiko’s jealous boyfriend, who believes Takashi to be simply her grandfather — a lie perpetrated in the public space of a car, itself also a claustrophobic setting (and reminiscent of his 2002 film, Ten, which never leaves the taxi the film is set in). Kiarostami noted, in a Q&A, that he’d written a draft of this script over 20 years ago and meant to place the action in Tehran, but Love’s Tokyo setting is more fitting; the constant reflections of light, bustling of other cars, and intrusion of sound erase any sense of a private world. Even the woman across the alley from Takashi is one who sees the world via her own devices and creates her own narratives from this. (It is perhaps also notable that both films feature characters who work as translators — trying to make a representation out of something real.)

Both Antonioni and Kiarostami end with apocalyptic moments: the former with the fading of human existence, and the latter with a shattering of the last refuge of privacy. The violence which ends Love — made all the more jilting by the rush of the credits along with the return of Ella Fitzgerald’s title song — is the culmination of the uncomfortable world Kiarostami has trotted throughout. The separation of what’s closed-off and safe is violently broken into, as what is seen from outside is different from what is seen from inside.. It’s all about perception; as Akiko spies someone who may be her grandmother, it may simply be an old woman. As Nico Baumbach writes in his essay for the Blu-ray booklet, “We are not seeing the old woman so much as experiencing Akiko’s ambivalent desire to see her in the midst of avoiding her.” Even when the representation fails, the emotions — or at least the perception of them — can take on their own authenticity, the only real thing in a public space. These metropolitan faces suffocate characters, filling up private desires with distraction and leering visions that always misinterpret what is really there. And two filmmakers capture the fact that love is never pure — there is always something on the outside that controls it.

Like Someone in Love and L’Eclisse are now both available from Criterion.