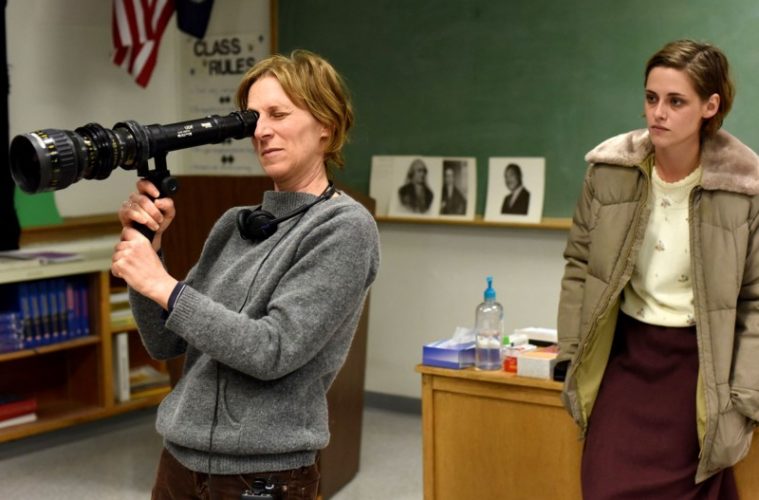 Kelly Reichardt on Nature, Politics, and What She’d Change About Documentary Filmmaking

Kelly Reichardt’s ability to capture the plight of everyday people is evident in works like Wendy and Lucy, Old Joy, and Certain Women, all of which perfectly capture the heightened feeling of isolation propelled by the modern world. Her brilliant observations on the ways in which we try to reach out to one another, and our desire to connect are at the center of a mid-career retrospective taking place at the Museum of Modern Art, where they are screening the six films she’s made since 1994. Reichardt is an American auteur in the tradition of mavericks like John Ford and John Cassavetes, who worked outside the system to make sure their visions were never compromised by studio interference.

In the two decades she’s been making films, Reichardt has also become an excellent chronicler of our times. Like the journals kept by the characters in Meek’s Cutoff, in her films one can find an insightful history of modern America, that’s often more accurate than what we see in the news. I spoke to Reichardt about her work to date and looked back at some of her key works, before wondering what’s next for her.

Congratulations on your mid-career retrospective at MoMA. How does looking back on your films make you feel?

I love how most of your films show us how nature can be scary. In films like Meek’s Cutoff and Wendy and Lucy it becomes the source of pain, while in something like Night Moves it becomes a political motivation.

Nature is scary. Have you seen what’s going on in the news right now? There are hurricanes, earthquakes every day. All parts of nature are scary now. Night Moves had a script I co-wrote with Jonathan Raymond and he’s very good at writing about nature. We wanted to make a film about our relationship to nature, but we have Jesse Eisenberg’s character who becomes an extremist which we see was perhaps not a very good idea for him. We identify with his character for a while. The film focuses more on the characters and their plan, so you know what the agenda is and the next thing that needs to be done. The bigger question becomes the action, and if what the characters have done resonates. It opens up a different perspective. That was a different kind of filmmaking for me. It was more genre-centric.

Meek’s Cutoff was such a great representation about the early years of the Obama era. When you’re making films you probably don’t think in such blunt terms about their meaning, do you often find that your films tell more about the time than you expected them to?

It wasn’t really Obama era. It was Bush era when we started working on the film, that was another film from a John Raymond script. Meek was a real person, but the script is fictionalized. Meek was this guy who was leading these people and didn’t know how to get them out of where they were. It’s a character-driven film as well. We got very deep into women’s journals from the period and the bigger ideas we started from faded into the background. The first seed of the idea was about this guy who claims to know what he’s doing,. It wasn’t Obama. He wasn’t on the scene yet.

I always thought it was more about Obama trying to get the country out of the mess Bush left it in.

Well, it takes a while to get a movie made. [Laughs]

Do you feel that the Trump era might deliver exciting art? Is this maybe one of the good things that will come out of this administration?

Gosh, I’m not worried about there being more artists I guess. I worry about there being more scientists. This morning I’m watching the hurricanes and the forest fires in the Pacific Northwest, and yeah, I don’t feel that good art will be enough to get us out of the current situation. There’s nothing I can really articulate about our times. It’s a little overwhelming.

Is there any art giving you solace when CNN gets to be too much to handle?

Oh, I never watch CNN anyway. Art, film, and music are always the place to go. I finally got a turntable again and I borrowed some of my dad’s records. The only way to survive Trump is maybe through jazz; maybe eight years of Coltrane will help us. You’re asking me about the glass being half full and I’m not that kind of person. Sometimes when I listen to the rhetoric going around I think if only art would enter people’s minds a bit more, it’s good for the brain. Although there’s also a lot of bad art out there in the world.

You often work with movie stars, but in your films they truly become embodiments of everymen and women. Have you ever been interested in the idea of doing nonfiction work?

That’s because those actors are very skilled, that’s about them. Maybe the circumstances they find themselves in are more relatable. They’re films that deal with the nitty gritty of life, so I think that offers more space for actors not to make grand gestures. They’re not really called for. I love watching documentary filmmaking, but it’s not a draw for me. I don’t shoot like a documentary filmmaker. I’m a very traditional formalist. The idea of letting the camera just follow the action is not really what I do. I do want to say one thing though, if I got to be Queen for a day and could change something about documentary filmmaking, I would pass a law saying that if you’re a documentary filmmaker you’re not allowed to put yourself in your own documentary. I can’t wait for that phase to be over. I sound like my grandmother when she said she couldn’t wait for the “blue jeans phase to be over.” I’m very hopeful.

When in 20 years we see another retrospective of your work at MoMA what do you think we’ll see then?

Oh my gosh, that’s counting chickens isn’t it? Rather than documentaries I’m keen on challenging myself in the opposite direction. The next film I’m making isn’t exactly a fairy tale cause there are no fairies in it, but there’s a bit of that in there, let’s put it that way.

Kelly Reichardt: Powerfully Observant is now underway at MoMA through September 25 and Certain Women is now available on The Criterion Collection.