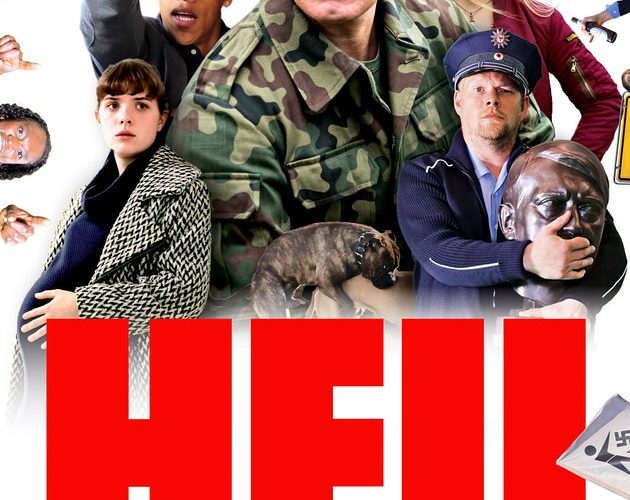 After the tight scripting and austere formalism of his previous feature Stations of the Cross – a film divided into 14 chapters, each shot in a single take and for the most part without camera movement – writer-director Dietrich Brüggemann goes for the opposite extreme in Heil, an unbridled satire of right-wing extremism in contemporary Germany. Despite the volte-face, in switching from religious to political fanaticism, Brüggemann’s critique hasn’t grown in sophistication. Even more facile than its undeservedly acclaimed predecessor, Heil is the filmic equivalent of shooting fish in a barrel, with a bazooka.

Most of the action takes place in Brandenburg, a region of former East Germany notorious for its high population of neo-Nazis and frequently derided by the rest of the population as a bumpkin wasteland. The increasingly muddled plot involves a trio of imbecilic neo-Nazis led by aspiring politician Sven (Benno Fürmann, whose exquisite performance would have deserved better material) who kidnap Sebastian (Jerry Hoffman), a part-Ghanaian, left-wing immigration pundit suffering from amnesia. Taking advantage of his condition, they use him as a puppet to forward their political agenda and get him to spout xenophobia at conferences and talk shows, which everyone readily accepts due to his immigrant background.

This somehow ties in with Sven’s plan of carrying out a false flag operation and mobilizing a German invasion of Poland to woo neo-Nazi Doreen (Anna Brüggemann, the director’s sister and frequent collaborator), who cited the annexation of Poland as her condition for going out with him. Then there’s also Sebastian’s current and former girlfriends, trying to rescue him with the help of an ex-cop; a group of Nipsters (Nazi hipsters – distressingly, a real subculture) competing with Sven for extremist predominance; a documentary filmmaker hoping to shoot a report sensationalist enough to be picked up for television; secret service agents attempting to recruit Sven’s gang members as informants; and a horde of other characters, all thrown into the anarchic, exhausting and only sporadically funny mix.

The incoherence of the narrative extends to the satire. In addition to right-wing radical groups, Heil also ridicules left-wing radical groups, as well as every political party, the police, the army, the media, the academic establishment, Germans, immigrants, the elite, the middle class, the working class – in short, any and every aspect of German society. At one point, even a filmmaker by the name of Dietrich Brüggemann makes an appearance (although the mockery directed at him is a lot milder than that reserved for everyone else).

Appearances notwithstanding, Heil is actually a highly topical film. Neo-Nazism is a persisting issue in Germany, particularly in the eastern part of the country, and the last year has seen a spike in xenophobic sentiment with newly founded organizations such as PEGIDA (Patriotic Europeans Against the Islamization of the West) enjoying an alarming level of popularity. While Brüggemann is clearly revelling in taking political incorrectness to outrageous extremes, his all-embracing contempt posits that these developments are symptoms of a national problem with widespread, institutional roots – a contention that is perfectly valid. It’s a pity that it gets drowned out by the sheer farcical excess of its articulation.