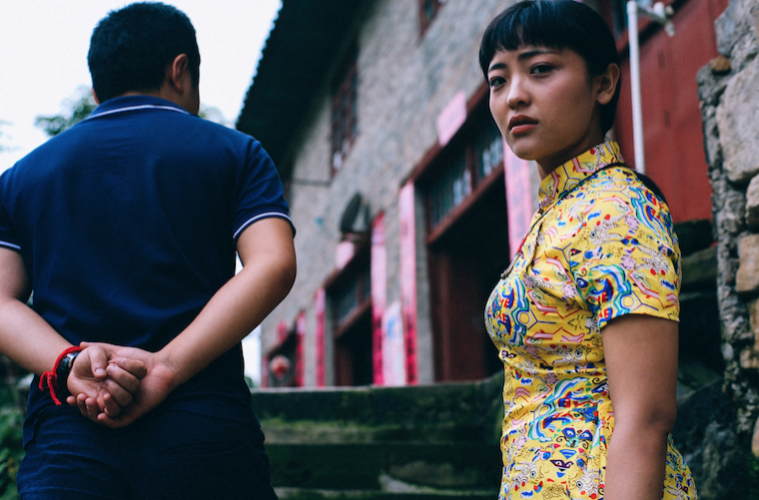 Part of this year’s New Directors/ New Films showcase in New York and the winner of Best Emerging Director at the Locarno Film Festival last year, Bi Gan has established himself as a talent to watch with his feature debut, Kaili Blues. Set in the Guizhou province of China, the film is softly enigmatic, shifting perceptions of space and time with deftly precise compositions that transform the mundane and meditate on humanity’s relationship to the areas around them.

Interspersing miasmatic narrative threads with spoken-word poetry, Kaili Blues happily exists in a place of rarefied naturalism as its characters circulate around each other with ghostly glides. Gan is primarily a poet before a filmmaker, and it’s a welcome reminder to see how artists familiar with other mediums approach cinematic language. Kali Blues rests in a near-limbo, but it’s not a ghost story. Like Gan’s prose, the unreal and real are placed completely adjacent to each other to the point where even affected dialogue or performed actions could be interpreted as either ritual or divine.

In time for its theatrical release at New York City’s Metrograph, we sat down with Gan and talked to him about the inspirations for the imaginary city, Dangmai, his decision not to tell the actors about the story, and why the experience taught him that he needs to be a good drinker.

This interview was translated with the help of Beier Zhong.

The Film Stage: I’m very interested in the notion that you were a poet before you became a filmmaker. In both Kaili Blues and in your poetry, there’s a really strong blending of organic and inorganic ideas. The architecture, for instance, seems to almost grow out of the land, or there’s random objects that just exist in a grassy space. What did you have in mind when you were blending those organic and inorganic ideas together?

Bi Gan: I began to write a poem in the early stages, and at that point, I don’t know exactly. It’s kind of like a poem. I just posted it on a Twitter-type thing. They call it Qzone in China. After I shot my first film called Tiger, I found that the structure was like really loose. And then I tried to connect the film with using poems to construct the structure of the whole film. Then I felt like it made the whole thing interesting, which makes the whole audience, the film parts, and the audience connected. I thinks poems are like music. They have the same rhythm, and that pushes the film together — all the story rhythms together.

So in that sense, how much of a script was there before, and how much came together in the actual filming process?

With 2001’s Tiger, at first, I shot that film. I think I made a mistake, which is that I can’t edit the film together. And then I began using poem to connect the film. Meanwhile, I like writing poetry, but I was also writing the script, and making the movie. It’s kind of a continuous thing happening. I was not thinking about writing a poem for the film, but making the film and writing the poem at the same time. And after I shot the film, I collected all of those poems that I wrote and tried to put it into the film.

Does writing poetry and filmmaking feed off each other for you then?

I think of poetry and filmmaking differently. Poetry exists by itself, but cinema is something you share with others.

I know that you grew up in Kaili, but i’m wondering about these other places that you’ve conceived. There’s Dangmai and Zhenyuan, which I believe is a real place, but how did you imagine these locations?

In terms of different locations, like Zhenyuan is my grandma’s hometown. And there’s this interesting story about Dangmai. I asked my Miao friend because I wanted to find this sort kind of like secret location. So I asked my friend, “How do you say secret location in the Miao language?” And then the friend said, it’s called Dangmai, which is the location. And later on, I found out that it’s not Dangmai in the Miao language for a secret location, but I still used it. I wanted the locations to have some similarities, but also have some differences. Like they all have water, but the architecture isn’t the same. Some of them are made of wood, some of them are using rocks or stones, but they have a similar atmosphere.

And related to that, in the second half of the film, there’s a long take where the camera just follows different characters in circuits around the Dangmai village. Did it take a lot of preparation or a lot of tries to get the motion right to be able to follow everyone?

For that long take into the woods where he goes all around the village, I had that on paper. I wrote something for the space. All the extras and all the actors have their paths, but they don’t know that they’re acting because they don’t know the script, and I would tell them certain tasks to do rather than tell them about the story. I wanted to construct something strange in this village. All the things are prepared and planned, not improvised. And that way, the audience will get a feeling that’s really dreamy, but also really realistic.

And related to that, I was reading an interview in Libération about how you said that you had imagined yourself as an alien coming down from the moon while you were writing the script. Did you think about that in terms of your camera movement as well?

Most of the actors — even the protagonist, really — don’t know the meaning of their characters. For example, the protagonist, Yongzhong Chen, he began to know what the meaning of his character was at the Locarno Festival when he got to see the whole film. My relationship with all the actors and actresses is really, really close. It’s like a family. But I’m distant with the actor as the director. And for some reason, I think I can get the most powerful and most beautiful things from those characters because it’s like real things. Because it’s like the script happening.

There’s a very interesting duality of dreams as both a comfort, and as something haunting in the film. Did this come from a personal experience?

For the meaning and stories in the dreams, some directors have those dreams, so it’s not a dream from his personal life. But I really know what dreaming is like. I know in a dream sequence, people are really depressed, and not walking or running, but like floating on the land. For cinema, cinema is a really realistic thing. And I found in the previous cinema, dream sequences are really kind of phony because it’s like too realistic in a way. And so, I want to reach the border of film to shoot the dream sequence, and I like the leaps between dream sequence and reality.

What can you tell me about Last Night on Earth, your next film?

My next film is about a detective in a village, and it will have a really new film language. The atmosphere is really similar to Kaili Blues.

What did you learn from Kaili Blues in making this new film?

I think I learned from Kaili Blues that you have to be a really good drinker. [Laughs] Like, you also really need to learn how to cry. While shooting this film, we had some bad moods or bad things happen, and we were desperate in the moment. And you have to acknowledge those failures. When you’re crying, it’s kind of a relief, for sure. And also, it’s kind of like, “I did my best, and that’s all that I can do.” And for drinking, people are fearful of a lot of things, but alcohol can make you brave.