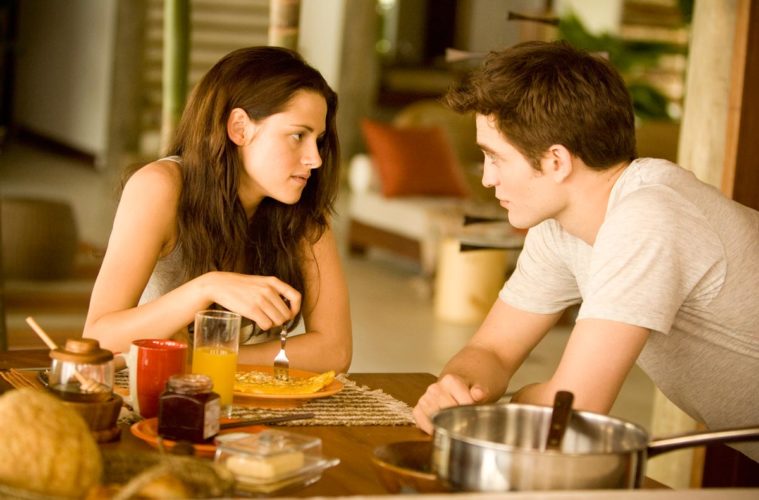 Just When You Thought It Was Over: ‘Twilight’ Saga Could Continue After Last Installment The last installment of the teen melodrama Twilight won’t hit theaters until mid November, but that may not be the end for the ever-angsty Bella, Edward, and Jacob.

When speaking to CompanyTown, Jon Feltheimer, chief executive of Lions Gate Entertainment — which just merged with Twilight‘s studio, Summit Entertainment, for too much money — said he “believes the film franchise will continue to have value to his company, even after the Nov. 16 release of the fifth movie completes the adaptation of author Stephanie Meyer’s four books.”

While this news saddens millions of cinephiles around the world, it makes sense — just consider the fact that, to date, the saga has grossed a total of almost $2.5 billion. Feltheimer also stated that he’s anticipating Breaking Dawn: Part 2 to make $700 million-plus in worldwide box office, which would outdo Part 1 by about $3 million.

When asked about the studio’s intentions for continuing the franchise after November, he stated, “It’s hard for me to imagine a movie that does $700 million-plus doesn’t have ongoing value. It’s an amazing franchise that they have done a great job of maintaining with absolutely no deterioration. So the simple answer is ‘Boy I hope so.'” I understand the mass appeal of several hundred million dollars, sure, but just because something makes a lot doesn’t automatically mean it has cinematic value. I know millions of tweens would disagree with me, but hey.

On an even more interesting note, a person close to the deal — but not “authorized to speak publicly” — noted that, because Lionsgate has a TV unit, we could eventually see Twilight on the small screen. In relation to a Twilight-themed TV show, Feltheimer noted that he would certainly hope to see one in the near future — as if Vampire Diaries isn’t punishment enough.

What do you think of the Twilight Saga continuing after the last installment?