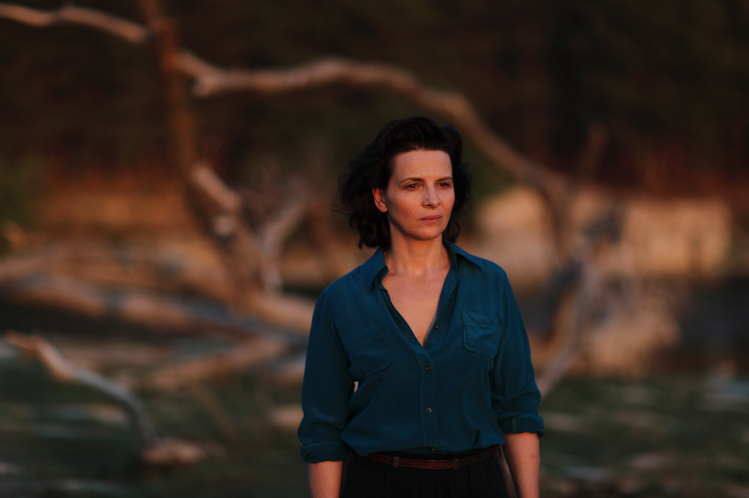 Premiering at the Venice Film Festival, Piero Messina‘s The Wait follows Anna (Juliette Binoche), a grief-stricken mother who needs to summon up a prayer and the last of her strength just to get out of bed after the unexplained passing of son Giuseppe. On one of those identical, insufferably quiet days that follow, she gets a call from Giuseppe’s Parisian girlfriend Jeanne (Lou de Laâge), whom he has invited to join them at their Sicilian family house. Knowing full well the girl’s mistake, Anna bids her over nonetheless and together they shall wait for a shared loved one who’s never going to return.

I had the chance to sit down with Binoche during a roundtable interview at the festival to discuss what attracted her to the project, what her character endures, the experience of shooting, working with great directors, and more. Check out the conversation below.

What attracted you to the project?

When I read the script and met with Piero, I sensed there’s a real director in him. Also it’s very exciting for an actor to work with somebody new, to take that risk. And I hadn’t done a film about losing a child since Blue. I thought this is a film I’d like to do, as it explores the subject matter in a different way. It’s about denial and how the mind of a mother works. It’s almost a creative process – she’s created a whole world in order to survive this loss. I also found the journey of the two women very interesting. It’s ambivalent, you never know where it’s going. My character goes through all these contradictory feelings. There’s hope and, at the same time, a deep despair.

Is your character Anna pretending in order to accept her loss?

It’s a way of putting distance between herself and the pain because it’s so difficult to accept. There’s nothing worse than losing a child. As a mother, the death of a child is almost like a betrayal of life. There’s a lot of anger involved, and probably shame as well. And guilt of course. It’s a very complex situation.

How do you protect yourself from those negative emotions when you act?

When you act, you don’t want to protect yourself. There’s no escaping. Some directors aren’t aware how hard it is on the actors. It’s your dedication to descending into the darkest parts of humanity in order to tell a story. There’s no way around it. You have to believe you’re in that situation. I remember having a very interesting conversation with Abbas Kiarostami. After a scene where I was crying, he said to me, “They’re false tears.” I said, “Well, try false tears!” He didn’t understand how that worked, the place an actor has to put himself into. You have to make your body believe that it’s true. Otherwise the emotions wouldn’t come to you. So it usually comes from sensations. That’s why I need to always try different ways of acting. Because you’re always making yourself feel new things. It’s not the director’s job. They decide where to put the camera and when to cut. After that it’s up to the skills and sense of responsibility of the actors.

A lot of things are left unsaid in this movie. We don’t always know what the characters are thinking. The scene where Jeanne dances with the young guy, for example. When Anna sees that, she first seems content, happy almost. But then her expression changed suddenly, without any explanation. As an actor, do you have to make up your mind as to what exactly is going through your character’s head before you perform?

Oh yes, definitely. Because there’s no words. And even with words you have to figure out what’s behind them. It depends on the way you work though. Sometimes I don’t make the decisions beforehand and just throw myself into it but other times you have to for the sake of creating an arc for your character. You have to know where your character’s going and where you’re taking your audience to. For that specific scene, I had a conversation with Piero. In my mind, Anna enjoys seeing Jeanne falling in love with somebody else. Because it gives hope that she’ll be able to move on. She herself, as the mother, can’t do it yet, because it’s too painful. Her own enemy is herself. She’s not ready to live again yet. So it was very important for me to look at Jeanne with joy. By the time she looks back at me, I notice she stops and looks taken aback, probably thinking I’m judging her as the mother of her boyfriend. But I don’t want to judge her, I get unsettled by the thought and leave. The whole process is as complex as that. Of course in a film you’re not going to explain everything. The audience must be made to wonder about the many maybe’s. Films should take the audience to wherever they want to go. In the editing room, Piero originally didn’t keep the expression of joy in the picture. I told him he’s missing a step here. Because she’s happy to see Jeanne moving on. Which is also why she later lies and tells Jeanne that Giuseppe has gone with another girl, and that she should move on as well. So it’s interesting, the choices directors and actors make.

The director mentioned he made you do a lot of takes during shooting. Did that upset you? Or do you prefer it that way?

I’m used to doing a lot of takes. You always adapt to a director’s method though. I don’t have a recipe. I can do just one take or do many. When you’re in a creative process, you’re not counting anyway. You recreate life. You recreate moments. So you’re not asking “another one?” because every take is another chance of exploration.

Has this shoot been an emotionally draining experience for you?

I was already drained when I arrived for the shoot because I’d just done a film that was really draining. I was completely exhausted but that was good for this part. So I used it to portray someone in grief. For me what’s really draining is when you cannot reach where you’re supposed to go.

You mentioned feeling free while shooting this film. Can you elaborate on that?

I think that’s because I prepared for the part, wasn’t satisfied with my preparations and decided to throw everything away, to just not know anything. That was a very interesting experience because it felt dangerous. But then I could tap into this fragility inside me, which I think helped me through the whole film.

Do you participate in the film editing process as well?

Yes. As an actor you’re right in the middle of it, so physically you know whether it works or not. I generally enjoy working with directors because if I wanted to work by myself I would have chosen to paint or something. But to work with others it becomes a co-creation. With Piero, he wanted to have my opinion on the editing. It depends on the directors – how open they are to collaboration. Abbas, for example, also showed me his edits. We didn’t agree on one scene, but in the end they had to make the decisions.

You have worked with some of the greatest directors of our time. From Haneke to Kieslowski, from Cronenberg to Hou Hsiao-Hsien. They’re all completely different filmmakers of course. But could you identify something they have in common that makes them such great storytellers?

I think it’s because there’s something so personal about the piece they’re doing that it becomes universal. I think the common denominator is that they’re doing something really close to their heart. But also the intelligence, particularly the intelligence of the heart, related to all the layers of humanity. And most great directors, they let you be, because they trust you. And with trust you get a lot more than without it.

The director mentioned you said on your first meeting that you don’t act, you are. Can you elaborate on that?

I was lucky enough to have an acting teacher when I was 18. Back then I was really acting with a capital A, and she destroyed all that, until I touched the core of what it is to just be. It’s a completely different feeling. When it’s time for you to perform, you have to let it breathe.

The Wait premiered at the Venice Film Festival and opens on April 29th.. See the trailer above.